From Infogalactic: the planetary knowledge core
(Redirected from 17th Congress of the All-Union Communist Party)
Jump to: navigation, search 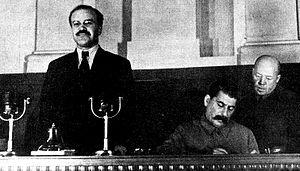 Molotov, Stalin and Poskrebyshev at the 17th Congress of the All-Union Communist Party

The 17th Congress of the Communist Party of the Soviet Union was held during 26 January - 10 February 1934. The congress was attended by 1,225 delegates with a casting vote and 736 delegates with a consultative vote, representing 1,872,488 party members and 935,298 candidate members.[1] Nicknamed "The Congress of the Victors" due to the economic successes of the First Five-Year Plan, it was in fact the last clandestine revolt against Stalin from within party ranks.[2]

During the elections to the 17th Central Committee Stalin received a significant number (over a hundred, although the precise number is unknown) of negative votes, whereas only three delegates crossed out the name of the popular Leningrad party boss, Sergei Kirov. The results were subsequently covered up on Stalin's orders and it was officially reported that Stalin also received only three negative votes.[3]

During the Congress a group of veteran party members approached Kirov with the suggestion that he replace Stalin as the party leader. Kirov declined the offer and reported the conversation to Stalin.

In public Stalin was acclaimed, not merely as the leader of the party, but as a towering, universal genius in every human sphere. All his former opponents spoke approvingly of him (other than Leon Trotsky, who had been exiled in 1929) and pledged their total support to the party line.

At the congress Rabkrin was dissolved and its functions passed to the Sovnarkom's People's Control Commission.

"Just like in 1914, the parties of bellicose imperialism, the parties of war and revenge, are appearing in the foreground. It is very clear that we're facing a new war." - Joseph Stalin, Report to the Seventeenth Congress of the CPSU, 1934