The 1934 FIFA World Cup was the second FIFA World Cup, the world championship for men's national association football teams. It took place in Italy from 27 May to 10 June 1934.

The 1934 World Cup was the first for which teams had to qualify to take part. Thirty-two nations entered the competition, and after qualification, 16 teams participated in the finals tournament. Reigning champions Uruguay did not enter. Italy became the second World Cup champions, beating Czechoslovakia 2–1 in the final.

After a lengthy decision-making process in which FIFA's executive committee met eight times,[2] Italy was chosen as the host nation at a meeting in Stockholm on 9 October 1932.[3] The decision was taken by the executive committee without a ballot of members.[3] The Italian bid was chosen in preference to one from Sweden;[4] the Italian government assigned a budget of 3.5 million lire to the tournament.[5]

36 countries applied to enter the tournament, so qualifying matches were required to thin the field to 16.[3] Even so, there were several notable absentees. Reigning World Cup holders Uruguay declined to participate, in protest at the refusal of several European countries to travel to South America for the previous World Cup, which Uruguay had hosted in 1930.[6] As a result, the 1934 World Cup is the only one in which the reigning champions did not participate.[7] The British Home Nations, in a period of self-imposed exile from FIFA, also refused to participate. Football Association committee member Charles Sutcliffe's view was: "the national associations of England, Scotland, Wales and Ireland have quite enough to do in their own International Championship which seems to me a far better World Championship than the one to be staged in Rome".[8]

Despite their role as hosts, Italy were still required to qualify, the first and only time the host nation was not granted automatic qualification.[3] The qualifying matches were arranged on a geographical basis. Withdrawals by Chile and Peru meant Argentina and Brazil qualified without playing a single match.[9]

Twelve of the 16 places were allocated to Europe, three to the Americas, and one to Africa or Asia (including Turkey). Only 10 of the 32 entrants, and four of the 16 qualified teams (Brazil, Argentina, United States and Egypt, the first African team to qualify for a World Cup finals tournament), were from outside Europe. The last place in the finals was contested between the United States and Mexico only three days before the start of the tournament in a one-off match in Rome, which the United States won.[10]

The majority of the 16 teams were making their first World Cup appearance. These included nine of the 12 European teams (Italy, Germany, Spain, the Netherlands, Hungary, Czechoslovakia, Sweden, Austria, and Switzerland) together with Egypt. Egypt were the first team from Africa in the finals and would not qualify again until the next time the competition was held in Italy, in 1990.

Like the Berlin Olympics two years later, the 1934 World Cup was a high-profile instance of a sporting event being used for overt political gain. Benito Mussolini was keen to use the tournament as a means of promoting fascism. 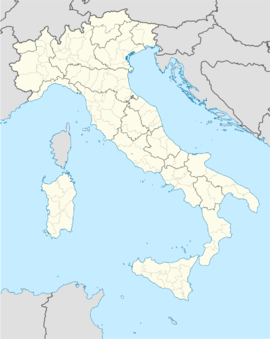 The number of supporters travelling from other countries was higher than at any previous football tournament, including 7,000 from the Netherlands and 10,000 each from Austria and Switzerland.[11]

The group stage used in the first World Cup was discarded in favour of a straight knockout tournament. If a match was tied after ninety minutes, then thirty minutes of extra time were played. If the score was still tied after extra time, the match would be replayed the next day.

The eight seeded teams – Argentina, Brazil, Germany, Italy, the Netherlands, Austria, Czechoslovakia and Hungary – were kept apart in the first round.

For a list of all squads that appeared in the final tournament, see 1934 FIFA World Cup squads.

Qualifying countries and their results

All eight first round matches kicked off at the same time.[12] Hosts and favourites Italy won handsomely, defeating the USA 7–1; The New York Times correspondent wrote that "only the fine goal-tending of Julius Hjulian of Chicago kept the score as low as it was".[13]

Internal disputes meant Argentina's squad for the tournament did not contain a single member of the team which had reached the final in 1930.[14] Against Sweden in Bologna, Argentina twice took the lead, but two goals by Sven Jonasson and a winner by Knut Kroon gave Sweden a 3–2 victory.[15] Fellow South Americans Brazil also suffered an early exit. Spain beat them comfortably; 3–1 the final score.[16]

For the only time in World Cup history, the last eight consisted entirely of European teams – Austria, Czechoslovakia, Germany, Hungary, Italy, Spain, Sweden, and Switzerland. All four non-European teams who made the journey to Italy were eliminated after one match.

In the quarter-finals, the first replayed match in World Cup history took place, when Italy and Spain drew 1–1 after extra time. The match was played in a highly aggressive manner with several players of both sides injured: rough play injured the Spanish goalkeeper Ricardo Zamora in the first match, leaving him unable to participate in the replay, while on the other side even rougher play by Spaniards broke the leg of the Italian Mario Pizziolo who would not play in the national team again.[17] Italy won the replay 1–0, their play so physical that at least three Spaniards had to depart the field with injuries.[18] Italy then went on to beat Austria in the semi-finals by the same score. Meanwhile, Czechoslovakia secured their place in the final by beating Germany 3–1.

The Stadium of the National Fascist Party was the venue for the final. With 80 minutes played, the Czechoslovaks led 1–0. The Italians managed to score before the final whistle, and then added another goal in extra time to be crowned World Cup winners.

Italy's total of three goals conceded in five matches was a record low for a team winning the World Cup. It was matched by England in 1966 (who played six matches) and Brazil in 1994 (who played seven), but was not surpassed until 1998 when France won the World Cup conceding only two goals over seven games, a record later matched by Italy in 2006 and Spain in 2010.[citation needed]

For a list of all squads that appeared in the final tournament, see 1934 FIFA World Cup squads.

With five goals, Oldřich Nejedlý is the top scorer in the tournament. In total, 70 goals were scored by 45 different players, with none of them credited as own goal.

In 1986, FIFA published a report that ranked all teams in each World Cup up to and including 1986, based on progress in the competition, overall results and quality of the opposition.[32][33] The rankings for the 1934 tournament were as follows:

The Federale 102, which was manufactured in Italy, was the match ball provided for the 1934 World Cup.[citation needed]