The elections were originally announced as being multicandidate elections; however, by halfway through the year the announcement was reversed due to the suspiciousness of the leadership during the Great Purge. However, during that early period a number of individuals attempted to make good on the multicandidate promise, including members of the Russian Orthodox Church who attempted to field religious candidates as a result of Article 124 of the new constitution, which promised freedom of religion. Many of the early individuals attempting to run as alternate candidates were arrested after the decision for multiple candidates was reversed. Additionally, the NKVD conducted mass arrests just prior to the election.

However, even with the mass arrests and with the tone more subdued than with the previous elections, there were still minor waves of dissent and opposition to candidates, especially major political figures (including Mikhail Kalinin, Anastas Mikoyan, and even Joseph Stalin himself) as well as celebrities (such as Aleksei Tolstoy) and candidates opposed on the basis of ethnicity (such as ethnic Russians running in the Ukrainian SSR). There was still a sense of excitement, however, given that this was the first election held under the new constitution. 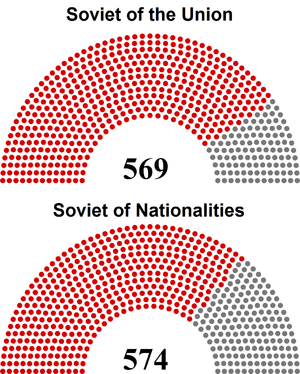