Changes from the 1937 Tour de France

The team trial stages, where the teams departed 15 minutes separately, were removed from the race. They would later return in the 1954 Tour de France, in a different form.[2] Instead, the 1938 Tour de France featured two individual time trials.[3]

In previous years, some cyclists were in teams and other rode individually. In 1937, there had been problems with individual cyclists being accused of helping other cyclists, culminating in the Belgian cyclists leaving the Tour. To avoid these problems, the categories for individual cyclists were removed for the 1938 Tour de France,[4] and the race was contested by national teams. But because there were many French cyclists that did not fit into the national team, there were two extra French teams, the Bleuets and Cadets.[2] The Bleuets was a kind of French "B"-team, while the Cadets consisted of young French promises.[5]

The big cycling nations in 1938, Belgium, Italy, Germany and France, each sent a team of 12 cyclists. Other countries, Spain, Luxembourg, Switzerland and the Netherlands, sent smaller teams of six cyclists each. The French had two extra teams of 12 cyclists, the Cadets and Bleuets.[2]

The three most powerful teams were the Belgian, the French and the Italian national team.[3] The Italian team was led by Bartali, who had been close to winning the Tour de France in 1937 until he crashed. The Italian cycling federation had requested him to skip the 1938 Giro d'Italia so he could focus on the Tour de France.[6] 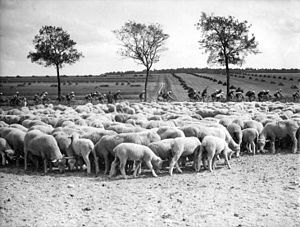 Cyclists passing a herd of sheep

Before the Pyrénées, all the favourites remained calm. André Leducq did not lose much time in the first stages, and when he got in a breakaway in the second part of the sixth stage, he took over the lead from Jean Majerus.[3] In the eighth stage, Gino Bartali attacked, and dropped everybody. On the descent of the Col d'Aspin, his wheel collapsed, and Félicien Vervaecke and Ward Vissers overtook him. Bartali came back to finish in third place, but Vervaecke took the lead in the general classification.[5] In that stage, former winner Georges Speicher was caught holding on to a car, and was removed from the race.[3]

After that stage, Bartali was in second place in the general classification. He won some time on Vervaecke because of bonifications for reaching the tops of the Portet d'Aspet and the Braus first and winning the 11th stage, but lost some time in the individual time trial in stage 10B.[3]

In the fourteenth stage, Bartali attacked again, and gained 17 minutes on Vervaecke and 20 on Vissers. Bartali was now leader of the race.[5] Before the next stage, Bartali felt poorly. His team director, Costante Girardengo, told him not to force himself. Bartali let the others get away on the first mountains, but during the descent of the Iseran, Bartali went as fast as he could, and reach his concurrents. During that stage, Mathias Clemens, who started the stage in second place, lost a lot of time, so Vervaecke was back in second place, 20 minutes behind Bartali.[3]

In the rest of the race, Bartali defended his lead with ease. Vervaecke won back some time in the last individual time trial, but that was not enough to endanger Bartali's lead.

The time that each cyclist required to finish each stage was recorded, and these times were added together for the general classification. If a cyclist had received a time bonus, it was subtracted from this total; all time penalties were added to this total. The cyclist with the least accumulated time was the race leader, identified by the yellow jersey.

The team classification was calculated in 1938 by adding up the times of the best three cyclists of a team; the team with the least time was the winner. In 1938, there were eight teams of twelve cyclists. Belgium, Italy, Germany and France had a team, Luxembourg and Switzerland both supplied six cyclists for a combined team, as did Spain and the Netherlands, and there were two extra French teams, the bleuets and the cadets.[2] The bleuets were also described as "France B", and the cadets as "France C".

For the mountains classification, 12 mountains were selected by the Tour organisation. The Iseran was included for the first time in 1938.[2]

Because of the political tensions in Europe before the Second World War, Italy did not send a team to the 1939 Tour de France, so Bartali was unable to defend his title.[16] After that, the only resumed in 1947. In 1948, Bartali won his second Tour de France, becoming the first and so far only cyclist to win editions of the Tour de France ten years apart.[1]