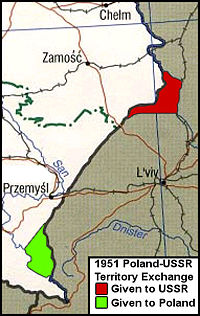 The 1951 Polish–Soviet territorial exchange or Polish-Soviet border adjustment treaty of 1951 was a border adjustment signed in Moscow between the Republic of Poland and the Soviet Union regarding roughly 480 km2 (185 sq mi) of land, along their mutual border. The exchange was made to the decisive economic benefit of the Soviet Union due to rich deposits of coal given up by Poland; these deposits were discovered well before World War II.[1][2] Within eight years following the agreement, the Soviets built four large coal mines there with the total mining capacity of 15 million ton annually.[3]

In exchange, the Soviet Union ceded part of the Ukrainian SSR's Drohobych Oblast (1939–1959): the city of Ustrzyki Dolne and the villages of Czarna (Ukrainian: Чорна Chorna), Shevchenko (whose name was restored back to prewar Polish name Lutowiska in 1957), Krościenko, Bandrów Narodowy, Bystre and Liskowate. All of this territory became part of the Krosno Voivodeship in 1975, and of the Subcarpathian Voivodeship on 1 January 1999. It was a stretch of barren land with low quality soil and without any natural resources.[1]

After World War II, the territory of Poland changed dramatically, moving westwards. Poland gained the former German provinces of Silesia and Pomerania, with the eastern part of Brandenburg and the southern part of East Prussia. The eastern border of the country was established roughly along the so-called Curzon line, leaving Białystok in Poland and Lviv in the Soviet Ukraine.[1]

The border of Poland and the Soviet Union, delimited on the 1945 agreement remained almost unchanged until the early 1950s (with a minor correction in 1948, when the village of Medyka near Przemyśl was transferred to Poland). Then, rich deposits of coal were confirmed in the so-called Bug River knee – Polish postwar territory between the upper Bug and the Sołokija River. The Soviet government decided to gain control over this land, which possessed not only coal, but also fertile black soil.[1]

On 15 February 1951 the governments of People's Republic of Poland and Union of Soviet Socialist Republics signed a bill which ratified the change of the eastern border of Poland. According to the agreement, Poland transferred to the Ukrainian Soviet Socialist Republic 480 km2 (185 sq mi) of territory located west of the town of Sokal, which had been located in the Hrubieszów county of the Lublin Voivodeship (together with the towns of Bełz, Sokal, Krystynopol and Uhnów as well as the rail line Rawa Ruska - Krystynopol). Currently, these towns are located in the Sokal Raion of the Lviv Oblast. Several coal mines have been constructed there, and the former town of Krystynopol is now known as Chervonohrad.[1]

Even though the territory ceded to Poland was roughly as large as the territory transferred to the Soviet Union, the land around Ustrzyki Dolne was attractive only for tourism. It lacked industry, natural resources, and its soil was not so fertile. Also, in the early 1950s it was almost deserted. Currently, the territory is part of Bieszczady County (Subcarpathian Voivodeship). In 1968 the Polish government constructed a 664 m (2,178 ft) long, 81 m (266 ft) high Solina Dam there on the San river, which created Lake Solina.[1]

According to the mutual agreement, all real estate present on the exchanged territories (buildings, infrastructure, farms, rail lines) was automatically transferred to the new owner and both sides relinquished all future claims. However, moveable goods were allowed to be kept under the condition that the owners had to take them when they left. The Polish population of the Sokal area was moved in May 1951, mainly to the Recovered Territories. The inhabitants of the town of Belz settled in Ustrzyki Dolne.

Officially, the Polish side claimed that the exchange took place on Warsaw’s initiative. However, in the early 1950s, Poland was de facto ruled by Moscow and all decisions were taken there. The Soviets claimed that the area of Ustrzyki possessed deposits of oil, but it turned out that all sources had been exploited.[1]