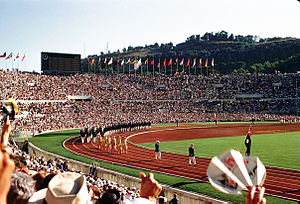 The 1960 Summer Olympics, officially known as the Games of the XVII Olympiad (Italian: Giochi della XVII Olimpiade), was an international multi-sport event held from August 25 to September 11, 1960 in Rome, Italy. Rome had been awarded the organization of the 1908 Summer Olympics, but after the 1906 eruption of Mount Vesuvius, was forced to decline and pass the honors to London.

On June 15, 1955, at the 50th IOC Session in Paris, France, Rome beat out Lausanne, Detroit, Budapest (being the first city of the Eastern Bloc to bid for the Olympic Games), Brussels, Mexico City and Tokyo for the rights to host the Games. Tokyo and Mexico City would eventually host the following 1964 and 1968 Summer Olympics.[1]

Toronto was initially interest in the bidding, but appears to have been dropped during the final bid process.[2] This is the first of five attempts by Toronto from 1960 to 2001.

Number of athletes per country

A total of 83 nations participated at the Rome Games. Athletes from Morocco, San Marino, Sudan, and Tunisia competed at the Olympic Games for the first time. Athletes from Barbados, Jamaica and Trinidad and Tobago would represent the new (British) West Indies Federation, competing as "Antilles", but this nation would only exist for this single Olympiad. Athletes from East Germany and West Germany would compete as the United Team of Germany from 1956-1964. The number in parentheses indicates the number of participants that each country contributed.

The 1960 Summer Olympic programme featured 150 events in the following 17 sports:

All dates are in Central European Time (UTC+1)

These are the top ten nations that won medals at the 1960 Games:[8]