Lasting four minutes and thirty-eight seconds, the magnitude 9.2 megathrust earthquake was the most powerful recorded in North American history, and the second most powerful recorded in world history. Soil liquefaction, fissures, landslides, and other ground failures caused major structural damage in several communities and much damage to property. Anchorage sustained great destruction or damage to many inadequately earthquake engineered houses, buildings, and infrastructure (paved streets, sidewalks, water and sewer mains, electrical systems, and other man-made equipment), particularly in the several landslide zones along Knik Arm. Two hundred miles southwest, some areas near Kodiak were permanently raised by 30 feet (9.1 m). Southeast of Anchorage, areas around the head of Turnagain Arm near Girdwood and Portage dropped as much as 8 feet (2.4 m), requiring reconstruction and fill to raise the Seward Highway above the new high tide mark.

In Prince William Sound, Port Valdez suffered a massive underwater landslide, resulting in the deaths of 30 people between the collapse of the Valdez city harbor and docks, and inside the ship that was docked there at the time. Nearby, a 27-foot (8.2 m) tsunami destroyed the village of Chenega, killing 23 of the 68 people who lived there; survivors out-ran the wave, climbing to high ground. Post-quake tsunamis severely affected Whittier, Seward, Kodiak, and other Alaskan communities, as well as people and property in British Columbia, Washington, Oregon, and California.[4] Tsunamis also caused damage in Hawaii and Japan. Evidence of motion directly related to the earthquake was reported from all over the earth.

The Alaska Earthquake was a subduction zone earthquake (megathrust earthquake), caused by an oceanic plate sinking under a continental plate. The fault responsible was the Aleutian Megathrust, a reverse fault caused by a compressional force. This caused much of the uneven ground which is the result of ground shifted to the opposite elevation. 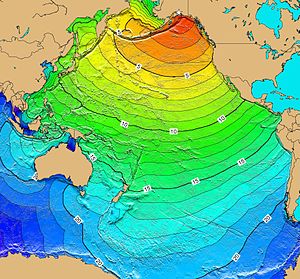 Calculated travel time map for the tectonic tsunami produced by the 1964 Prince William Sound earthquake in Alaska. Tsunami Travel Times computed using TTT v3.1 (P. Wessel). Map does not show the height or strength of the waves, only the calculated travel times.

Two types of tsunamis were produced by this subduction zone earthquake. There was a tectonic tsunami produced in addition to about 20 smaller and local tsunamis. These smaller tsunami were produced by submarine and subaerial landslides and were responsible for the majority of the tsunami damage. Tsunami waves were noted in over 20 countries, including: Peru, New Zealand, Papua New Guinea, Japan, and Antarctica. The largest tsunami wave was recorded in Shoup Bay, Alaska, with a height of about 220 ft (67 m).[3] 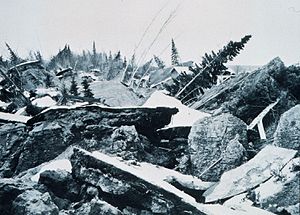 The largest landslide in Anchorage occurred along Knik Arm between Point Woronzof and Fish Creek, causing substantial damage to numerous homes in the Turnagain-By-The-Sea subdivision. 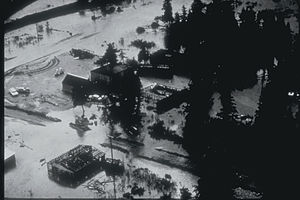 The ruin of Portage 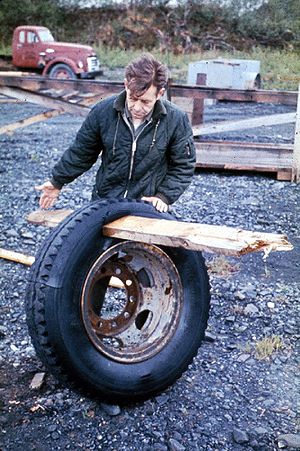 A 2x6 plank driven through a ten-ply tire by the tsunami in Whittier.

Most damage occurred in Anchorage, 75 mi (120 km) northwest of the epicenter. Anchorage was not hit by tsunamis, but downtown Anchorage was heavily damaged, and parts of the city built on sandy bluffs overlying "Bootlegger Cove clay" near Cook Inlet, most notably the Turnagain neighborhood, suffered landslide damage. The neighborhood lost 75 houses in the landslide, and the destroyed area has since been turned into Earthquake Park. The Government Hill school suffered from the Government Hill landslide leaving it in two jagged, broken pieces. Land overlooking the Ship Creek valley near the Alaska Railroad yards also slid, destroying many acres of buildings and city blocks in downtown Anchorage. Most other areas of the city were only moderately damaged. The 60-foot concrete control tower at the Anchorage International Airport was not engineered to withstand earthquake activity and collapsed, killing William George Taylor, the Federal Aviation Agency Air Traffic Controller on duty in the tower cab at the time the earthquake began.[9]

One house on W. 10th Avenue suffered peripheral damage, but only one block away the recently completed (and still unoccupied) Four Seasons Building on Ninth Avenue collapsed completely, with the concrete elevator shafts sticking up out of the rubble like a seesaw.

The hamlets of Girdwood and Portage, located 30 and 40 mi (60 km) southeast of central Anchorage on the Turnagain Arm, were destroyed by subsidence and subsequent tidal action. Girdwood was relocated inland and Portage was abandoned. About 20 miles (32 km) of the Seward Highway sank below the high-water mark of Turnagain Arm; the highway and its bridges were raised and rebuilt in 1964-66.

Most coastal towns in the Prince William Sound, Kenai Peninsula, and Kodiak Island areas, especially the major ports of Seward, Whittier and Kodiak were heavily damaged by a combination of seismic activity, subsidence, post-quake tsunamis and/or earthquake-caused fires. Valdez was not totally destroyed, but after three years, the town relocated to higher ground 7 km (4 mi) west of its original site. Some Alaska Native villages, including Chenega and Afognak, were destroyed or damaged. The earthquake caused the Cold-War era ballistic missile detection radar of Clear Air Force Station to go offline for six minutes, the only unscheduled interruption in its operational history. Near Cordova, the Million Dollar Bridge crossing the Copper River also collapsed. The community of Girdwood was also confined to the southern side of the Seward Highway when water rushed into Turnagain Arm and flooded or destroyed any buildings left standing to the north of the highway. Interestingly, only the ground immediately along the highway and that on the north side of the road dropped, prompting geologists to speculate that Girdwood may rest upon an ancient cliff face, now covered by countless thousands of years of sediment and glacial deposits.[citation needed]

A 4.5 ft (1.4 m) wave reached Prince Rupert, British Columbia, just south of the Alaska Panhandle, about three hours after the earthquake. The tsunami then reached Tofino, on the exposed west coast of Vancouver Island, and traveled up a fjord to hit Port Alberni twice, washing away 55 homes and damaging 375 others. The towns of Hot Springs Cove, Zeballos, and Amai also saw damage.[10] The damage in British Columbia was estimated at $10 million Canadian (or $77.3 million in today's Canadian dollars, or $76.3 million in today's U.S. dollars). 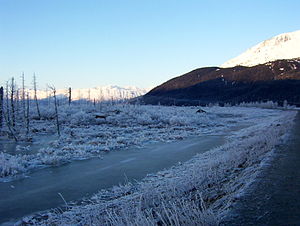 A winter scene of a "Ghost forest" that was killed and preserved by salt water along with ruined buildings at the site of the former town of Portage, 2011

Twelve people were killed by the tsunami in or near Crescent City, California, while four children were killed on the Oregon coast at Beverly Beach State Park.[11] Other coastal towns in the U.S. Pacific Northwest and Hawaii were damaged. Minor damage to boats occurred as far south as Los Angeles.[12] Effects of the earthquake were even noted as far east as Texas. Tide gauges in Freeport recorded waves similar to seismic surface waves.[13] In the Florida Everglades, an artesian aquifer located near Lake Chekika saw its water flow rate double from 3 million gallons per day to 6 million gallons per day, 60 to 90 minutes after the first shock of the earthquake.[14]