The Rat Islands form part of the Aleutian Islands, a chain of volcanic islands forming an island arc, that results from the subduction of the Pacific Plate beneath the North American Plate. This plate boundary, the Alaska-Aleutian megathrust, has been the location of many megathrust earthquakes. 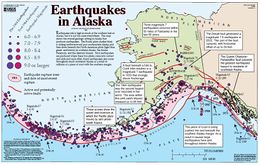 Map showing the tectonics and seismicity of Alaska

The earthquake was associated with a 600 km long rupture along the plate boundary, based on the distribution of aftershocks.[3] The pattern of energy release suggest the presence of three asperities along the plate interface, each causing a pulse of moment release. Modelling of the tsunami supports the idea that the earthquake consisted of three sub-events, related to three structural 'blocks' within the overriding plate.[4]

The main shock was followed by an earthquake of magnitude 7.6 nearly two months later, that triggered a small tsunami.[1] This was not an aftershock, but a normal fault event within the outer rise of the subducting plate, triggered by the earlier event.[5]

The tsunami had a maximum run-up height of 10.7 m on Shemya Island, 2.0 m at Amchitka Island, 1.6 m at Attu Island and 1.1 m in northern Kauai, Hawaii. It was also observed in Peru, Ecuador, Mexico, California, Japan and eastern Russia.[1]

Flooding from the tsunami caused $10,000 worth of damage on Amchitka Island.[2] Minor damage from the earthquake was recorded on both Attu and Shemya islands in the form of cracks in runways.