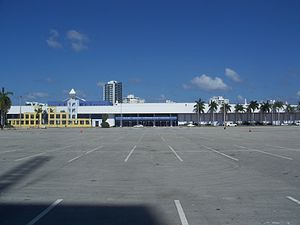 The 1968 National Convention of the Republican Party of the United States was held at the Miami Beach Convention Center in Miami Beach, Dade County, Florida, from August 5 to August 8, 1968. Richard M. Nixon, former Vice President of the United States under 34th President Dwight D. Eisenhower, emerged as the frontrunner again for the 1968 Republican presidential nomination. Nixon had been the Republican Party nominee in the 1960 presidential election, and lost to Democratic Party candidate John F. Kennedy.

The so-called "New Nixon" in the 1968 presidential election devised a "Southern strategy," taking advantage of anti-integration and progressive/liberal policies of the national Democratic Party and the administration of incumbent 36th President Lyndon B. Johnson.

Nixon decided not to re-select his 1960 running mate Henry Cabot Lodge Jr and U.S. House of Representatives House Minority Leader, Gerald R. Ford of Michigan, proposed New York City Mayor John V. Lindsay for Vice President, but Nixon turned instead to another perceived moderate, Maryland Governor Spiro T. Agnew. Agnew, former Baltimore County Executive in the Baltimore City suburbs (1963-1967), and since Governor of Maryland, had come to Republican leaders and Nixon's attention when he summoned several Black and Negro civic, religious and political leaders in Baltimore City to the local State Office Building complex, following the disastrous April 1968 urban riots which enveloped Black sections of East and West Baltimore, along with the rest of the nation, after the assassination of the Rev. Dr. Martin Luther King, Jr. in Memphis, Tennessee. Agnew complained of the Black leaders' lack of support after a number of what he perceived to be positive projects, programs and support by his Republican administration for the minority communities in the City. Agnew's biting comments caused many in the audience to walk out.

Nixon was nominated on the first ballot with 692 votes to 277 votes for Nelson Rockefeller, 182 votes for California Governor Ronald Reagan and the rest scattered. In his acceptance speech he deplored the state of the union: "When the strongest nation in the world can be tied down for four years in Vietnam with no end in sight, when the richest nation in the world can't manage its own economy, when the nation with the greatest tradition of the rule of law is plagued by unprecedented racial violence, when the President of the United States cannot travel abroad or to any major city at home, then it's time for new leadership for the United States of America". He also said that he had "a good teacher", referring to Eisenhower, and made the delegates happy with the statement "Let's win this one for Ike!" Eisenhower was not present during Nixon's speech nor during any part of the Convention. Due to failing health, he was under doctor's orders not to travel. He died the following March.

Balloting for the nominations at the GOP Convention

The following were placed into nomination: