At the 7th (Special) Session of the Supreme Soviet of the Soviet Union Ninth Convocation on October 7, 1977, the third and last Soviet Constitution, also known as the Brezhnev Constitution, was unanimously adopted. The official name of the Constitution was "Constitution (Fundamental Law) of the Union of Soviet Socialist Republics" (Russian: Конститу́ция (Основно́й Зако́н) Сою́за Сове́тских Социалисти́ческих Респу́блик).

The preamble stated that "the aims of the dictatorship of the proletariat having been fulfilled, the Soviet state has become the state of the whole people." Compared with previous constitutions, the Brezhnev Constitution extended the bounds of constitutional regulation of society. The first chapter defined the leading role of the Communist Party of the Soviet Union (CPSU) and established principles for the management of the state and the government. Articles related 1 defined the USSR as a socialist state, as did all previous constitutions:

The Union of Soviet Socialist Republics is a socialist state of the whole people, expressing the will and interests of the workers, peasants, and intelligentsia, the working people of all the nations and nationalities of the country.

The difference is that, according to the new Constitution, the government no longer represented the workers and peasants alone. Later chapters established principles for economic management and cultural relations.

The 1977 Constitution was long and detailed. It included twenty-eight more articles than the 1936 Soviet Constitution. The Constitution explicitly defined the division of responsibilities between the central and republic governments. For example, the Constitution placed the regulation of boundaries and administrative divisions within the jurisdiction of the republics. However, provisions established the rules under which the republics could make such changes.

Just like all preceding versions of the Soviet Constitution, the 1977 Constitution preserved the right of constituent Soviet republics to secede from the Union; this provision would later play an important role in the dissolution of the Soviet Union. 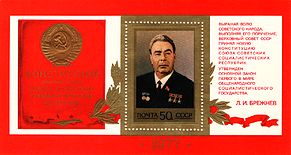 Adoption of the Constitution was a legislative act of the Supreme Soviet. Amendments to the Constitution were likewise adopted by legislative act of that body. Amendments required the approval of a two-thirds majority of the deputies of the Congress of People's Deputies and could be initiated by the congress itself; the Supreme Soviet, acting through its commissions and committees; the Presidium or chairman of the Supreme Soviet; the Constitutional Oversight Committee; the Council of Ministers; republic soviets; the Committee of People's Control; the Supreme Court; the Procuracy; and the chief state arbiter. In addition, the leading boards of official organizations and even the Academy of Sciences could initiate amendments and other legislation.

Soviet constitutions were frequently amended and had been changed more often than the constitutions of most Western countries. Nevertheless, the 1977 Constitution attempted to avoid frequent amendment by establishing regulations for government bodies (especially the lists of ministries, state commissions, and other bodies in the 1936 constitution) in separate, but equally authoritative, enabling legislation, such as the Law on the Council of Ministers of July 5, 1978. Other enabling legislation has included a law on citizenship, a law on elections to the Supreme Soviet, a law on the status of Supreme Soviet deputies, regulations for the Supreme Soviet, a resolution on commissions, regulations on local government, and laws on the Supreme Court and the Procuracy. The enabling legislation provided the specific and changing operating rules for these government bodies.

Amendments to the 1977 Constitution

In October 1988, draft amendments and additions to the 1977 Constitution were published in the Soviet media for public discussion. Following the public review process, the Supreme Soviet adopted the amendments and additions in December 1988. The amendments and additions substantially and fundamentally changed the electoral and political systems. Although Soviet officials touted the changes as a return to "Leninist" forms and functions, citing that the Congress of People's Deputies had antecedents in the Congress of Soviets, they were unprecedented in many respects. The position of chairman of the Supreme Soviet was formally designated and given specific powers, particularly leadership over the legislative agenda, the ability to issue orders (rasporiazheniia), and formal power to conduct negotiations and sign treaties with foreign governments and international organizations. The Constitutional Oversight Committee, composed of people who were not in the Congress of People's Deputies, was established and given formal power to review the constitutionality of laws and normative acts of the central and republican governments and to suggest their suspension and repeal. The electoral process was constitutionally opened up to multiple candidacies, although not multi-party candidacies. A legislative body—the Supreme Soviet—was to convene for regular spring and fall sessions, each lasting three to four months. Unlike the old Supreme Soviet, however, the new Supreme Soviet was indirectly elected by the population, being elected from among the members of the Congress of People's Deputies.

The Soviet Constitution included a series of civil and political rights. Among these were the rights to freedom of speech, freedom of the press, and freedom of assembly and the right to religious belief and worship. In addition, the Constitution provided for freedom of artistic work, protection of the family, inviolability of the person and home, and the right to privacy. In line with the Marxist-Leninist ideology of the government, the Constitution also granted social and economic rights not provided by constitutions in some capitalist countries. Among these were the rights to work, rest and leisure, health protection, care in old age and sickness, housing, education, and cultural benefits.

Unlike Western constitutions, the Soviet Constitution outlined limitations on political rights, whereas in democratic countries these limitations are usually left up to the legislative and/or judicial institutions. Article 6 effectively eliminated partisan opposition and division within government by granting to the CPSU the power to lead and guide society. Article 39 enabled the government to prohibit any activities it considered detrimental by stating that "Enjoyment of the rights and freedoms of citizens must not be to the detriment of the interests of society or the state." Article 59 obliged citizens to obey the laws and comply with the standards of socialist society as determined by the Party. The government did not treat as inalienable those political and socioeconomic rights the Constitution granted to the people. Citizens enjoyed rights only when the exercise of those rights did not interfere with the interests of the state, and the CPSU alone had the power and authority to determine policies for the government and society. For example, the right to freedom of expression contained in Article 52 could be suspended if the exercise of that freedom failed to be in accord with Party policies. Until the era of glasnost, freedom of expression did not entail the right to criticize the government. The constitution did provide a "freedom of conscience, that is, the right to profess or not to profess any religion, and to conduct religious worship or atheistic propaganda." It prohibited incitement of hatred or hostility on religious grounds.

The Constitution also failed to provide political and judicial mechanisms for the protection of rights. Thus, the Constitution lacked explicit guarantees protecting the rights of the people. In fact, the Supreme Soviet has never introduced amendments specifically designed to protect individual rights. Neither did the people have a higher authority within the government to which to appeal when they believed their rights had been violated. The Supreme Court had no power to ensure that constitutional rights were observed by legislation or were respected by the rest of the government. The Soviet Union also signed the Final Act of the Conference on Security and Cooperation in Europe (Helsinki Accords), which mandated that internationally recognized human rights be respected in the signatory countries. In the late 1980s, however, realigning constitutional and domestic law with international commitments on human rights was publicly debated.

Role of the citizen

Article 59 of the Constitution stated that citizens' exercise of their rights was inseparable from performance of their duties. Articles 60 through 69 defined these duties. Citizens were required to work and to observe labor discipline. The legal code labeled evasion of work as "parasitism" and provided punishment for this crime. The Constitution also obliged citizens to protect socialist property and oppose corruption. All citizens performed military service as a duty to safeguard and "enhance the power and prestige of the Soviet state." Violation of this duty was considered "a betrayal of the motherland and the gravest of crimes". Finally, the Constitution required parents to train their children for socially useful work and to raise them as worthy members of socialist society.

The Constitution and other legislation protected and enforced Soviet citizenship. Legislation on citizenship granted equal rights of citizenship to naturalized citizens as well as to the native born. Laws also specified that citizens could not freely renounce their citizenship. Citizens were required to apply for permission to do so from the Presidium of the Supreme Soviet, which could reject the application if the applicant had not completed military service, had judicial duties, or was responsible for family dependants. In addition, the Presidium could refuse the application to protect national security, or revoke citizenship for defamation of the Soviet Union or for acts damaging to national prestige or security.