From Infogalactic: the planetary knowledge core
Jump to: navigation, search
This article is about the rugby union event. For the rugby league event, see 1995 Rugby League World Cup.

The World Cup was the first major sporting event to take place in South Africa following the end of apartheid. It was also the first World Cup in which South Africa was allowed to compete; the International Rugby Football Board (IRFB, now World Rugby) had only readmitted South Africa to international rugby in 1992, following negotiations to end apartheid. The World Cup would also be the last major event of rugby union's amateur era; two months after the tournament, the IRFB opened the sport to professionalism.

In the final, held at Ellis Park in Johannesburg on 24 June, South Africa defeated New Zealand 15–12, with Joel Stransky scoring a drop goal in extra time to win the match. Following South Africa's victory, Nelson Mandela, the President of South Africa, wearing a Springboks rugby shirt and cap, presented the Webb Ellis Cup to the South African captain François Pienaar. Mandela and Pienaar's involvement in the World Cup is the subject of the John Carlin book Playing the Enemy: Nelson Mandela and the Game That Made a Nation, its 2009 film adaptation Invictus, and the ESPN TV documentary The 16th Man in 2010.

The eight quarter-finalists from the 1991 Rugby World Cup all received automatic entry, as did South Africa, as hosts. The remaining seven of the 16 positions available in the tournament were filled by regional qualifiers. The qualifying tournaments were broken up into regional associations: Africa, the Americas, Asia, Europe and Oceania. Côte d'Ivoire qualified through Africa, Japan through Asia, Argentina through the Americas, Italy, Romania and Wales through Europe, Tonga through Oceania.

The 1995 tournament was the first Rugby World Cup to be hosted by just one country, and thus, all the venues are within the one country. In total, nine stadiums were used for the World Cup, most being owned by local municipalities, and the majority of the venues were upgraded prior to the tournament. Six of the nine stadiums were South African Test grounds. The four largest stadiums were used for the finals, with the final taking place at Johannesburg's Ellis Park.

There were games originally scheduled to have been played in Brakpan, Germiston, Pietermaritzburg and Witbank, but these games were reallocated to other venues. This reduced the number of venues from 14 to 9. The reasons cited for this change had to do with facilities for both the press and spectators, as well as the security. The change in the itinerary occurred in January 1994. Further changes occurred in April, so that evening games were played at stadiums with good floodlighting. It is also thought that Potchefstroom was an original venue. 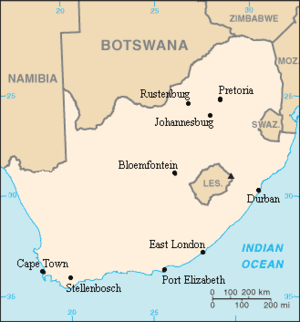 The tournament was contested by 16 different nations using the same format that was used in 1987 and 1991 and in total 32 matches were played. The competition began on 25 May, when the hosts South Africa defeated Australia 27–18 at Newlands in Cape Town. The tournament culminated with the final between South Africa and the All Blacks at Ellis Park in Johannesburg on 24 June. In total, the tournament ran for around one month. The nations were broken up into four pools of four, with each pool consisting of two teams that were automatically qualified and two that went through the qualifying tournaments.

The points system that was used in the pool stage was unchanged from 1991:

Pool winners were drawn against opposite pool runners-up in the quarter-finals. For example, the winner of A faces the runner up of B, and the winner of B face the runner-up of A. The whole finals stage adopts a knock-out format, and the winners of the quarter-finals advance to the semi-finals, where winner 1 faces winner 2, and winner 3 faces winner 4. The winners advance to the final, and the losers contest a third/fourth place play-off two days before the final.

The final was contested by New Zealand and hosts South Africa. Both nations finished undefeated at the top of their pools. South Africa defeated Western Samoa in the quarter finals, and then France in the semi-finals to reach the final; New Zealand defeated Scotland in the quarter-finals, and England in the semi-finals, a game in which Jonah Lomu famously scored four tries for the All Blacks. The final was played at Ellis Park in Johannesburg and refereed by Ed Morrison of England.

South Africa led 9–6 at half time, and New Zealand levelled the scores at 9–9 with a drop goal in the second half. Though Andrew Mehrtens almost kicked a late drop goal for the All Blacks, the score remained tied at full-time, forcing the game into extra time. Both teams scored penalty goals in the first half of extra time, but Joel Stransky then scored a drop goal to win the final for South Africa.

What happened after the match has become an iconic moment in the history of the sport. Nelson Mandela, wearing a Springbok rugby jersey and baseball cap, presented the Webb Ellis Cup to South African captain François Pienaar to the delight of the capacity crowd. The moment is thought by some to be one of the most famous finals of any sport.[2]

The event was broadcast in Australia by Network Ten and in the United Kingdom by ITV.

The South African Mint issued a one-ounce gold proof "Protea" coin with a total mintage of 406 pieces to commemorate the event being hosted by South Africa.