The brigade landed in Normandy in August 1944 and was given the mission of containing the German-held port of Dunkirk for the rest of the war in Europe. In May 1945, the brigade moved to Czechoslovakia and was absorbed into the Czechoslovak Army.

The formation continued to train in the UK until the summer of 1944 when, with some 4,000 troops under command, it moved to Normandy, joining 21st Army Group at Falaise on 30 August. On 6 October, the brigade advanced to Dunkirk, northern France, and relieved the 154 (Highland) Infantry Brigade on the eastern side of the besieged German-held "fortress" of Dunkirk. The brigade was subordinated to the First Canadian Army, which was, at the time, responsible for the conduct of the siege.

The brigade's tank units were primarily equipped with the Cromwell tank; however, they also had 17-pdr armed Sherman Firefly and Cruiser Mk VIII Challenger tanks, and M5 Stuart light tanks.[2] Crusader AA tanks were dispatched with the division, but not believed to be used. They were supported by a Motor Battalion in M5 Half-tracks and Universal Carriers, an anti-tank battery of 12 Ordnance QF 17-pounder anti-tank guns and a Field Artillery Regiment of two batteries of Ordnance QF 25 pounder gun-howitzers.[2] In addition, the unit was supported by a Reconnaissance Squadron that used Humber Light Reconnaissance Cars,[3] M5 Stuarts, Humber Scout Cars and Cromwell tanks.[2]

1st Brigade spent the remainder of the war at Dunkirk, alternately attacking and being attacked by the energetic German garrison, including a successful major raid on German positions on 28 October 1944, Czechoslovakian Independence Day. During that time, the brigade was reinforced by French units formed from local French Forces of the Interior (FFI) troops; on 15 October, these were amalgamated into the 110th FFI Infantry Regiment with two battalions allocated for the Siege of Dunkirk. On 24 January 1945, the 110th FFI Regiment was disbanded, with two its battalions and two other FFI battalions used to re-form the French 51st Infantry Regiment, a unit of the regular army. Various British and Canadian formations also supported the siege at one time or another.

In November, the brigade passed from the First Canadian Army back to direct control by Montgomery’s 21st Army Group. In the spring of 1945, the 1st Armoured Brigade Group was expanded to 5,900 Czechoslovak officers and men, some of whom came from nationals recruited in liberated France, and a significant group (a tank battalion, an artillery regiment, a motor transport company and a company of engineers[4]) from Czechs and Slovaks forced to serve in the Wehrmacht and who were captured by the Allies in Normandy. 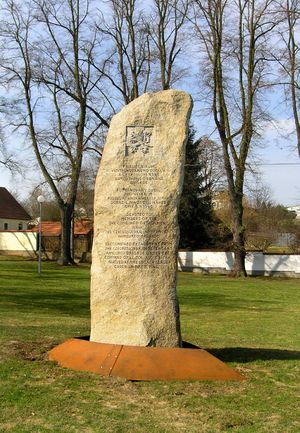 On 23 April, a symbolic 140-men strong unit detached from the troops besieging Dunkirk, led by major Sítek, joined with the 3rd US Army and raised the Czechoslovak flag on its homeland border crossing on 1 May 1945 at Cheb.[5]

The Dunkirk garrison did not surrender until after the surrender of Germany, 9 May 1945, when 15,500 German troops and three U-boats were captured by the Czechoslovaks. The brigade then marched to Prague, reaching the city on 18 May 1945, eight days after the arrival of Soviet-sponsored Czechoslovak troops commanded by Ludvík Svoboda.[6]

During the siege of Dunkirk, the Czechoslovak Armoured Brigade suffered 668 casualties; 167 dead, 461 wounded, and 40 missing.