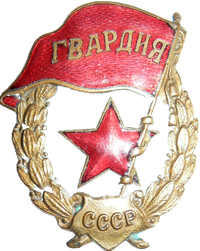 The 1st Guards Army was a Soviet field army that fought on the Eastern Front during World War II.

On August 6, 1942, the army formed from the 2nd Reserve Army with five Guards Rifle Divisions, the 37th, 38th, 39th, 40th and 41st. On August 9, the army was incorporated into Southeastern Front. On August 18, it was transferred to the Stalingrad Front (renamed Don Front on September 30).

During the German Sixth Army's assault on Stalingrad in August 1942, the Red Army launched a counter-offensive to drive the German forces back. The 1st Guards Army and the 24th Army launched the attack. Little success was met. The 1st Guards Army managed an advance of just a few miles, while the 24th Army was pushed back right into its start-line.

On November 5, 1942, 1st Guards Army was reformed from 63rd Army according Stavka directive of November 1. The army was a part of Southwestern Front. When the German troops were making their attack on Stalingrad, the First Guards Army was facing the Italian Eighth Army in the upper part of the Don River. The Army participated in Stalingrad strategic offensive Operation Uranus. As the right flank of the front shock group, 1st Guards Army with 5th Tank Army created the appearance of the Stalingrad encirclement "boiler".

On December 5, 1942, 1st Guards Army is split, its left wing being renamed 3rd Guards Army of the Southwestern Front.

The 1st Guards Army was created on December 8, 1942 according Stavka directive of December 5, 1942. The troops of the army was formed from the part of the operational group of Southwestern Front, and the headquarters of the army formed of management of 4th Army Reserve. It is composed of units of the right wing of the previous version of the 1st guard army and some reinforcement units : the 4th Guards Rifle Corps, the 6th Guards Rifle Corps, the 153rd Rifle Division, and the 18th Tank Corps. After the German relief operation was held, the 1st Guards Army, along with the 6th Army and 3rd Guards Army, launched an attack in Operation Little Saturn. During the operation the Soviets defeated the Italian Eighth Army and gained a respectable amount of territory. By the end of the year, the 1st Guards Army was outside Millerovo.

After the collapse of the Soviet Union the Army became the 1st Army Corps of the Ukrainian Ground Forces, and then Territorial Directorate "North".