File:PRR I1s 4300.jpg
This 2-10-0 steam locomotive is a Pennsylvania Railroad class PRR I1s, the most successful class of such locomotives in North America. Note the firebox placed above the rear drivers.

Other equivalent classifications are:

These locomotives were popular in Europe, particularly in Germany, and in Russia; British use of the type was confined to the period during and after World War II. In the United States, the 2-10-0 was not widely popular but was a favorite of a small number of railroads which operated mostly in mountainous terrain. Among these was the Erie Railroad, a major Chicago to New York trunk line railroad.

The 2-10-0's main advantage was that five out of six of its axles were powered, meaning almost all the weight was available for traction rather than being distributed over pilot and trailing wheels. The long rigid wheelbase caused problems on tightly curved track, so blind drivers were the norm, either on the central axle, and/or on the second and/or fourth axles. Often lateral motion devices were attached to the leading drive axle.

The wheel arrangement's disadvantages included the firebox size restriction caused by the lack of trailing wheel. This meant the firebox was fitted in between the wheels (common on earlier locomotives) and was long and narrow, or if mounted above the driving wheels, was wide and long but shallow. Many locomotives chose the latter option. A firebox mounted over the drivers also restricted the diameter of the driving wheels, which in turn limited speed. As with the Consolidation (2-8-0), "chopping" at speed ensured a rough ride for the crew due to instability caused by the wheel arrangement. In fact, backing any locomotive without a trailing axle was restricted to under twenty miles per hour or less. Most 2-10-0s were not operated at speeds greater than 50 mph (80 km/h).

The type operated as freight engine, although locomotives in Germany and the United Kingdom proved capable of hauling passenger trains. 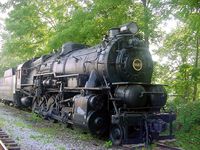 The first Decapods built for the Lehigh Valley Railroad in 1867 proved too rough on the track because of their long coupled wheelbase, so one pair of drivers were removed.[citation needed] No more followed for 19 years, until the Northern Pacific Railway bought two for use on the switchbacks over Stampede Pass, while the 2-mile (3.2 km) tunnel was being built.[1] In low-speed service where high tractive effort was critical, these Decapods were successful. Small numbers of other Decapods were built over the next twenty years, mostly for service in steeply graded mountainous areas where power at low speeds was the requirement. The type did not prove as popular as the successful Consolidation (2-8-0) type. Among Decapod users was the Atchison, Topeka and Santa Fe Railway. The engines were tandem compounds but their ongoing reversing limitations became the genesis of the 2-10-2 wheel arrangement. 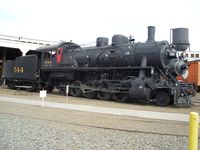 Seaboard Air Line #544, one of over 200 undelivered Russian Decapods. It resides at the North Carolina Transportation Museum. Note the smaller boiler diameter, compared to the I1s above.

The first boost in the number of Decapods occurred when Imperial Russia ordered approximately 1,200 Decapods from American builders during World War I. When the Bolshevik revolution occurred in 1917, 857 had already been delivered,[2] but more than 200 were either awaiting shipment or were in the process of construction.[2] These stranded locomotives were adopted by the United States Railroad Administration (USRA), the body created by the Government to oversee and control the railroads during the War, converted to American standards, and put to use on American railroads. Small and light-footed, these Russian decapods proved popular with smaller railroads, and many of them remained in service long after the USRA's control of the railroads ceased. Many indeed lasted until the end of steam on those railroads. 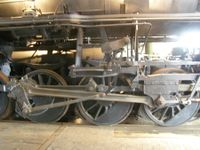 The same Russian Decapod, showing the large gap between the boiler and drivers, typical of locomotives designed for Russia.

Swengel suggested the 2-10-0 arrangement was 'obsolete' by 1916, when the Pennsylvania Railroad (PRR) commenced an experiment with a 2-10-0 locomotive at its Juniata plant.[3] Most 10 coupled engines constructed for U.S. railroads during World War 1 were of the USRA 2-10-2 arrangement, but the PRR committed to 122 of the 2-10-0s.[4] Swengel argued this commitment to the 2-10-0, nicknamed "Deks", was controversial even in 1916 and was more so in 1922 when the PRR placed additional orders. The PRR was soon the biggest user of Decapods in the United States. The type was ideally suited to the Pennsy's heavily graded Allegheny Mountains routes, which required lugging ability according to tractive effort, not speed according to horse power.

The PRR decapod, class I1s, was unlike the Russian decapod; it was huge, taking advantage of the PRR's heavy trackage and high axle loading, with a fat, free-steaming boiler that earned the type the nickname of 'Hippos' on the PRR. Two giant cylinders (30½ x 32 inch) gave the I1s power and their tenders permitted hard and long workings between stops. They were unpopular with the crews, for they were hard riding.[7] Indeed, one author described them as the holy terror of the PRR.[citation needed] The last operations on the PRR were 1957.[7]

A small number of other Decapods were ordered by other railroads; those built for the Western Maryland Railway were the largest ever built, at almost 420,000 lb (190 t) weight.

Baldwin developed two standard 2-10-0s for railroads with low axle-load requirements.[8] The heavier version sold to the Gulf, Mobile and Northern Railroad (#250–265), and the Kansas City, Mexico and Orient Railway (#800–805). The lighter version sold to the Alabama, Tennessee and Northern Railroad (#401–403), Georgia, Florida and Alabama Railway, the Great Western Railway of Colorado, the Osage Railway, Seaboard Air Line Railroad, and the Durham and Southern Railway, who bought three — Nos. 200–201 in May 1930 and No. 202 in September 1933.[citation needed]

Thirteen Decapod locomotives survive in the USA, including two Baldwin standards, six Russian Decapods and one PRR I1s. Two, Great Western 90, a Baldwin Decapod at the Strasburg Rail Road, and Frisco 1630, a Russian Decapod at the Illinois Railway Museum, are operational. One Decapod survives as a static exhibit at the North Carolina Transportation Museum in Spencer, North Carolina (Seaboard Airline 2-10-0 #544).

The 2-10-0 arrangement was a very popular one in Germany. The first were built by the individual state railways from 1915 to 1918, and these later became the DRG BR58. The DRG then produced a number of standard classes of 2-10-0s: the heavy 3-cylinder BR44 (1753 built), the two-cylinder version BR43 (35 built), and the lightweight BR50 (3164 built). During wartime, the BR44 and BR50 designs were simplified as ÜK (Übergangs Kriegslokomotiven, or interim war locomotives). By 1941, it was clear that even these were too complicated, expensive, time-consuming to build, and used too much of materials in short supply, so new Kriegslokomotive (war locomotive) designs were developed; the lightweight BR52 (6161 built) and the intermediate weight BR42 (844 built).

Postwar locomotives of these types, particularly the BR 52, were spread all over Europe and were taken into service by the railways of many different countries:

Locomotives with ten driving wheels were rare in British railway history. The first 2-10-0 was built during the Second World War, as a variant of the "Austerity" 2-8-0 for lightly built railways.[9] The only other 2-10-0 type was the 251 strong Class 9F introduced by British Railways in 1954.[10] The class included 92220 Evening Star, the last steam locomotive built for British Railways, in 1960;[11] and 92203 (named Black Prince when preserved), which in 1983 set a record for the heaviest steam locomotive-hauled train in Britain when it started a 2,162-ton train at Foster Yeoman quarry in Somerset.[citation needed] 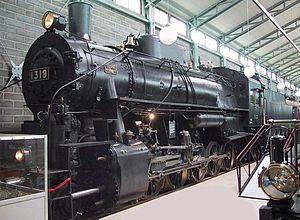 The State Railroads of Finland purchased 20 American Decapods after WWII - these were originally built for the Soviet Union, but never delivered to them. Of the 20 engines, 10 were made by Baldwin, 10 by Alco. Since they were originally built for the USSR, they had the correct gauge for Finland, too (1,524 mm (5 ft) exactly). One (Alco # 75214, 1947) is preserved at the Finnish Railway Museum in Hyvinkää, Finland.

The locomotive had nickname Truman in Finland. It was used on hauling heavy freight trains.

From 1910 to 1951, the French industry built more than 500 decapods for three railway companies (Paris-Orléans, Nord, Est) and for the national railways (SNCF). Moreover, at the end of World War II, SNCF inherited more than 200 units of German decapods built in France, mostly BR 44. The last decapod, a SNCF 150P, was withdrawn in 1968. All 2-10-0s, of French or of German design, proved reliable and powerful in service. One can notice that some engines of the Paris-Orléans company were dedicated to passenger service on difficult mountain lines. 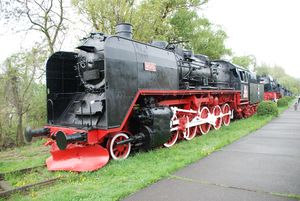 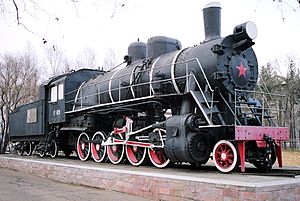