2001 Mars Odyssey is a robotic spacecraft orbiting the planet Mars. The project was developed by NASA, and contracted out to Lockheed Martin, with an expected cost for the entire mission of US$297 million. Its mission is to use spectrometers and a thermal imager to detect evidence of past or present water and ice, as well as study the planet's geology and radiation environment.[1] It is hoped that the data Odyssey obtains will help answer the question of whether life has ever existed on Mars and create a risk-assessment of the radiation future astronauts on Mars might experience. It also acts as a relay for communications between the Mars Exploration Rovers, Mars Science Laboratory, and the Phoenix lander to Earth. The mission was named as a tribute to Arthur C. Clarke, evoking the name of 2001: A Space Odyssey.[2]

By December 15, 2010 it broke the record for longest serving spacecraft at Mars, with 3,340 days of operation, claiming the title from NASA's Mars Global Surveyor.[4] It currently holds the record for the longest-surviving continually active spacecraft in orbit around a planet other than Earth at 21 years, 1 month and 5 days.

Mars Odyssey was originally a component of the Mars Surveyor 2001 program, and was named the Mars Surveyor 2001 Orbiter. It was intended to have a companion spacecraft known as Mars Surveyor 2001 Lander, but the lander mission was canceled in May 2000 following the failures of Mars Climate Orbiter and Mars Polar Lander in late 1999. Subsequently, the name 2001 Mars Odyssey was selected for the orbiter as a specific tribute to the vision of space exploration shown in works by Arthur C. Clarke, including 2001: A Space Odyssey. The music from Mythodea by Greek composer Vangelis was used as the theme music for the mission.

The three primary instruments Odyssey uses are the:

On May 28, 2002 (sol 210), NASA reported that Odyssey's GRS had detected large amounts of hydrogen, a sign that there must be ice lying within a meter of the planet's surface.[citation needed] GRS is a collaboration between University of Arizona's Lunar and Planetary Lab., the Los Alamos National Laboratory, and Russia's Space Research Institute. 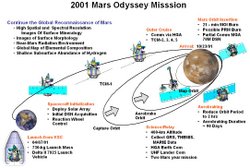 Mars Odyssey launched from Cape Canaveral on April 11, 2001, and arrived at Mars about 200 days later on October 24. The spacecraft's main engine fired in order to brake the spacecraft's speed, which allowed it to be captured into orbit around Mars. Odyssey then spent about three months aerobraking, using friction with the upper reaches of the Martian atmosphere to gradually slow down and to shrink and circularize its orbit. By using the atmosphere of Mars to slow down the spacecraft in its orbit, rather than firing its engine or thrusters, Odyssey was able to save more than 200 kilograms (440 lb) of propellant. (This reduction in spacecraft weight allowed the mission to be launched on a Delta II 7925 launch vehicle, rather than a larger, more expensive launcher.)[7] Aerobraking ended in January, and Odyssey began its science mapping mission on February 19, 2002. Odyssey's original, nominal mission lasted until August 2004, but repeated mission extensions have kept the mission active.[8]

Odyssey has served as the primary means of communications for NASA’s Mars surface explorers in the past decade, up to the Curiosity rover. About 85% of images and other data from NASA's twin Mars Exploration Rovers, Spirit and Opportunity, have reached Earth via communications relay by Odyssey. Odyssey continues to receive transmissions from the surviving rover, Opportunity, every day. The orbiter helped analyze potential landing sites for the rovers and performed the same task for NASA's Phoenix mission, which landed on Mars in May 2008. Odyssey aided NASA's Mars Reconnaissance Orbiter, which reached Mars in March 2006, by monitoring atmospheric conditions during months when the newly arrived orbiter used aerobraking to alter its orbit into the desired shape.

Odyssey is in a sun-synchronous orbit, meaning it passes over most points on Mars' surface twice per day. On September 30, 2008 (sol 2465) the spacecraft altered its orbit to gain better sensitivity for its infrared mapping of Martian minerals. The new orbit eliminated the use of the gamma ray detector, due to the potential for overheating the instrument at the new orbit. 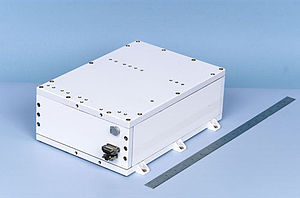 The payload's MARIE radiation experiment stopped taking measurements after a large solar event bombarded the Odyssey spacecraft on October 28, 2003. Engineers believe the most likely cause is that a computer chip was damaged by a solar particle smashing into the MARIE computer board.

One of the orbiter's three flywheels failed in June 2012. However, Odyssey's design included a fourth flywheel, a spare carried against exactly this eventuality. The spare was spun up and successfully brought into service. Since July 2012, Odyssey has been back in full, nominal operation mode following three weeks of 'safe' mode on remote maintenance.[9]

In February 11, 2014, mission control accelerated Odyssey's drift toward a morning-daylight orbit to "enable observation of changing ground temperatures after sunrise and after sunset in thousands of places on Mars". The desired change will occur gradually until the intended orbit geometry is reached in November 2015 and another manoeuvre halts the drift.[10] Those observations could yield insight about the composition of the ground and about temperature-driven processes, such as warm-season flows observed on some slopes, and geysers fed by spring thawing of carbon dioxide (CO2) ice near Mars' poles.[10]

In 2010, a spokesman for NASA's Jet Propulsion Laboratory stated that Odyssey could continue operating until at least about 2016 and "perhaps even well beyond".[16]

Mars Odyssey mapped the distribution of water in the surface.[17] The ground truth for its measurements came on July 31, 2008, when NASA announced that the Phoenix lander confirmed the presence of water on Mars,[18] as predicted in 2002 based on data from the Odyssey orbiter. The science team is trying to determine whether the water ice ever thaws enough to be available for microscopic life, and if carbon-containing chemicals and other raw materials for life are present.

Mars Odyssey's THEMIS instrument was used to help select a landing site for the Mars Science Laboratory (MSL).[19] Several days before MSL's landing in August 2012, Odyssey's orbit was altered to ensure that it would be able to capture signals from the rover during its first few minutes on the Martian surface.[20] Odyssey now acts as a relay for UHF radio signals from the (MSL) rover Curiosity.[20] Because Odyssey is in a sun-synchronous orbit, it consistently passes over Curiosity's location at the same two times every day, allowing for convenient scheduling of contact with Earth.