MOIK Baku and Göyazan Qazax were relegated after finishing the previous season in 13th and 14th place. They were replaced by Gilan Qäbälä and Simurq Zaqatala from the Azerbaijan First Division. 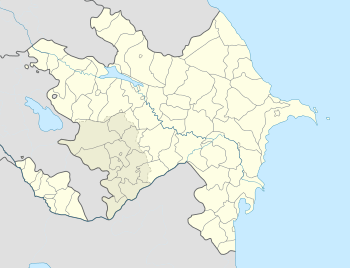 1Karabakh played their home matches at Surakhani Stadium in Baku before moving to their current stadium on 3 May 2009.[1]

Updated to games played on 5 May 2013.
Source: Azerbaijan Professional Football league
Rules for classification: 1) points; 2) goal difference; 3) number of goals scored
1 MKT-Araz qualified for the first qualifiying round of the 2005–06 UEFA Cup as winner of the 2004–05 Azerbaijan Cup.
2FK Gäncä were excluded from the league due to financial problems
(C) = Champion; (R) = Relegated; (P) = Promoted; (E) = Eliminated; (O) = Play-off winner; (A) = Advances to a further round.
Only applicable when the season is not finished:
(Q) = Qualified to the phase of tournament indicated; (TQ) = Qualified to tournament, but not yet to the particular phase indicated; (RQ) = Qualified to the relegation tournament indicated; (DQ) = Disqualified from tournament.