The 2006 Russian march (Russian: Русский марш, Russkiy marsh) was an extensive enterprise on organizing the wide-ranging nationalist public mass demonstration, one of annual Russian marches in several major Russian cities under the slogan "it's our country",[1] attached to 4 November 2006, the Day of National Unity. Among the most notable participants were the Movement Against Illegal Immigration, the main organiser of rallies, Eurasian Youth Union, the Communist Youth Vanguard, the National State Party of Russia and the State Duma deputy Nikolay Kuryanovich who was excluded from the Liberal Democratic Party of Russia for his sympathy with the March. Other participants were the National Patriotic Front "Memory", the "Truth" Community, the Russian National Union, the Russian Social Movement and the "Russian Order" Movement.[2] The final destination for gatherings in Moscow became the Slavyanskaya Square, though the March was banned by city mayor Yuriy Luzhkov on 31 October. Despite condemning the xenophobic nature of The March, the Deputy Chief of the Moscow branch of Yabloko Alexey Navalny advocated for the permission of the event in the framework of freedom of assembly.[3] 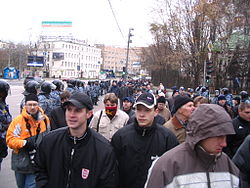 Besides Moscow, the March was planned in Saint Petersburg, Krasnoyarsk, Novosibirsk, Chita, Stavropol, Maykop, Tyumen, Vladivostok, Yuzhno-Sakhalinsk, Blagoveshchensk, Nizhniy Novgorod and Kaliningrad, but was banned in the majority of cities as well.[4][5][6] Irkutsk officially allowed the March.[7] The rallies took place also in Ukraine (Kiev, Crimea, Odessa, Sevastopol), Moldova (Chişinău, Tiraspol) and Tbilisi.[8][9][10] The Heads of Russian Youth of Moldova and Eurasian Youth Union of the Republic of Moldova have been arrested.[11][12] Even though the use of Nazi symbols was prohibited by the organizers,[13] a flag with conventionalized swastika was raised by the Head of SS-Slavic Union Dmitriy Demushkin in Moscow.[14]

Banning the march in Moscow, mayor Yuriy Luzhkov said: "If we allow our state to be split on ethnic or interconfessional grounds, if we allow religious wars, then I am afraid this will be the end of Russia."[1] A counter-protest in Moscow by left-wing demonstrators drew about 500 people carrying banners with slogans such as "Russian Anti-Fascist Front" and "I am Russian and therefore not a fascist."[15] The Russian March was also opposed by the Moscow Bureau for Human Rights and Russian Jewish community headed by rabbi Berel Lazar.[16][17] Krasnoyarsk youth organizations "Together!", "Krasnoyarsk Regional Student Squads", "Krasnoyarsk Youth Forum", "Yenisey Patriots" and "Youth Guards of United Russia" have prepared a written appeal to Governor of Krasnoyarsk Oblast Alexander Khloponin and city mayor Pyotr Pimashkov to prevent holding of Russian March in the city.[18] However the Movement Against Illegal Immigration told Reuters it would go ahead with their gatherings regardless of whether they were authorized or not.

A separate mass-meeting called the Right March have been organized by several Orthodox movements (the National Council, the Orthodox Standard Bearers Union and The Bastion), which declared their independent intentions.[19]

The first Russian March took place on 4 November 2005 and was the first legal far-right mass meeting in modern Russian history.[2] Both rallies have been inspired by expulsion of Polish-Lithuanian forces from the Moscow Kremlin during the Russo-Polish War of 1605–1618 on 22 October O.S. (4 November N.S.), which was subsequently marked by tsar in 1612 as a feast day.[citation needed] The preparations for 2006 March have been launched by the Action Against Illegal Immigrantion and Eurasian Youth Union. Due to this the march has had two different names and two different schedules.[14]