The 2008–09 UEFA Cup was the 38th season of the UEFA Cup football tournament. The final was played at the Şükrü Saracoğlu Stadium, home ground of Fenerbahçe, in Istanbul, Turkey, on 20 May 2009.[1] This season was the final one to use the UEFA Cup format;[2] starting in 2009, the event was known as the UEFA Europa League.

FC Zenit St. Petersburg were the defending champions but were eliminated by Udinese in the Round of 16.

A total of 157 teams from 53 UEFA associations participated in the 2008–09 UEFA Cup. Associations were allocated places according to their 2007 UEFA league coefficients, which takes into account their performance in European competitions from 2002–03 to 2006–7.[3]

Since the winners of the 2007–08 UEFA Cup, Zenit Saint Petersburg, qualified for the 2008–09 UEFA Champions League through domestic performance, the title holder spot reserved for them in the play off round was vacated. As a result, the following changes to the default allocation system were made to compensate for the vacant title holder spot in the group stage:[5]

Round and draw dates

The calendar shows the dates of the rounds and draw.[5] 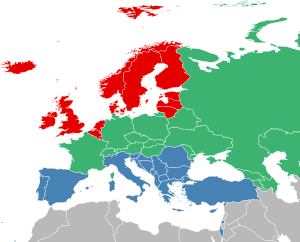 The three UEFA Cup regions, used for the regionalised qualifying stage draws, in a map

In each region of the draw for the second qualifying round, teams were divided into two pots, on the basis of UEFA coefficients. The higher pots contained teams with a ranking of 176 or higher, and unranked teams from associations ranked 1 to 15 (or 17 in the Southern-Mediterranean region).

12 of the 32 ties were won by the lower-ranked team. The 12 teams that lost to a lower team were: AEK Athens, Dnipro Dnipropetrovsk, Aris Thessaloniki, Red Star Belgrade, Grasshopper, Slovan Liberec, Viking, Lokomotiv Sofia, Elfsborg, Gent, Queen of the South and Debrecen. St Patrick's Athletic were the only team to beat a higher-seeded team in each of the two qualifying rounds. 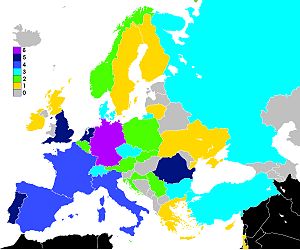 32 teams entered the tournament at the first round, along with the 32 winners from the previous round and the 16 losers from the Champions League third qualifying round. The 80 teams were then split into eight groups of 10 teams; five seeded teams and five unseeded teams. The draw was based on their coefficient ranking with one exception: no country can have multiple teams in any group. Teams ranked 108 or higher were seeded, as were unranked teams from England and Spain.

The draw, which was conducted by UEFA General Secretary David Taylor, was held on Friday, 29 August 2008 at 13:00 CET in Monaco. The matches were played on 18 September and 2 October 2008. 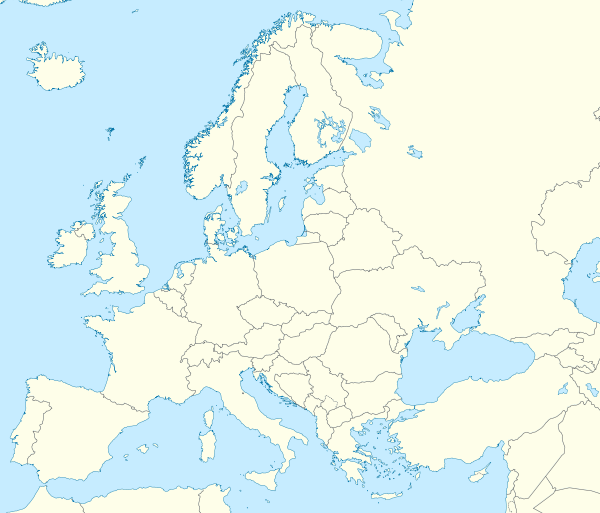 The draw for the group stage of the 2008–09 UEFA Cup was held at UEFA Headquarters in Nyon, Switzerland, on 7 October 2008. The 40 teams in the draw were divided into five pots based on their UEFA coefficients. The eight teams with the highest UEFA coefficient were allocated to Pot 1, the next eight teams to Pot 2, and so on. One team from each pot was drawn for each group, with the restriction that no team could be drawn with one from the same country.[21]

The top three teams (highlighted in green) of each group qualified for the next round. Based on paragraph 6.06 in the UEFA regulations for the current season, if two or more teams are equal on points on completion of the group matches, the following criteria are applied to determine the rankings:[4]

Except for the final round, the rounds in the final phase are two-legged. In the event of aggregate scores being equal after normal time in the second leg, the winning team will be that which scored more goals on their away leg: if the scores in the two matches were identical, extra time is played. The away goals rule also applies if scores are equal at the end of extra time. If there are no goals scored in extra time, the tie is decided on a penalty shoot-out. The team first out of the hat in each tie plays the first leg of their tie at home, and the second leg away.

The draw for the Round of 32 was held on Friday, 19 December 2008 in Nyon, Switzerland. The draw was conducted by UEFA General Secretary David Taylor, Giorgio Marchetti, UEFA's director of professional football and 2009 UEFA Cup Final ambassador Can Bartu. In this round, each UEFA Cup group winner paired with the third-placed team from another UEFA Cup group and each UEFA Cup group runner-up paired with a third-placed team from the UEFA Champions League, with the only restriction on the draw being that teams from the same national association could not be drawn together. The UEFA Cup group winners and runners-up each played the second leg of their Round of 32 ties at home.[22]

The draws for the quarterfinals and semifinals were both held on Friday, 20 March 2009 in Nyon, Switzerland. The draw was conducted by David Taylor and Can Bartu.

The first legs were played on 30 April and the second legs on 7 May.

The final of the 2008–09 UEFA Cup was held on 20 May 2009 at the Şükrü Saracoğlu Stadium in Istanbul, Turkey. This was the first time that the UEFA Cup Final had been held in Turkey and followed the 2005 UEFA Champions League Final, which was held in Istanbul's Atatürk Olympic Stadium.