The Azerbaijan Cup 2009–10 was the 18th season of the annual cup competition in Azerbaijan. It started on 17 September 2009 with four games of the Premiliary Round and ended on 22 May 2009 with the Final held at Tofiq Bahramov Stadium in Baku. FK Karabakh were the defending champions. Twenty teams competed in this year's competition.[1]

The four winners from the Preliminary Round joined the 12 teams of the Azerbaijan Premier League 2009–10 in this round. The first legs took place on 4 and 5 November 2009 and the second legs took take place on 11 and 12 November 2009. 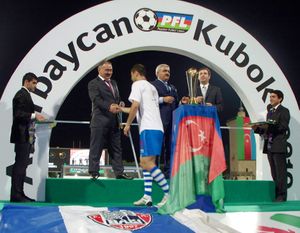 The two winners from the Semifinals matched up in this match.