The 2010 Kazakhstan Premier League was the 19th season of the Kazakhstan Premier League, the highest football league competition in Kazakhstan. It started on 22 March 2010 and the regular season ended on 14 August 2010.[1] The playoff rounds began on 22 August 2010[2] and ended on 6 November 2010. Aktobe are the defending champions, having won their fourth league title in five seasons and their third in a row last season.

This year's competition was completed in two stages. The first stage consisted of all 12 clubs playing against each other twice, once at home and once away. After these matches were completed, the league was split into two halves for the second stage, where each club played every other club in its group twice, once at home and once away. The top six clubs played for the league title while the bottom six clubs played to avoid relegation.

Kyzylzhar, Kaisar and Kazakhmys were relegated to the Kazakhstan First Division at the end of last season for finishing at the bottom of the league. Because of the league's contraction to twelve clubs for this season, only the First Division champions, Kairat, were promoted in their places. 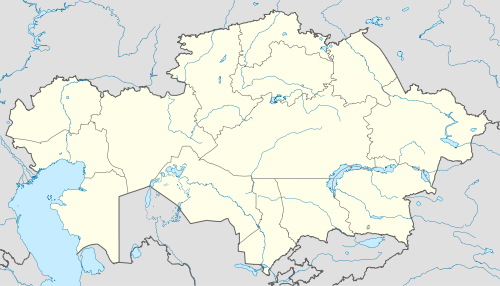 Zhetysu
Locations of teams in the 2010 Kazakhstan Premier League

Source: kff.kz (Russian)
Rules for classification: 1st points; 2nd overall wins; 3rd goal difference; 4th goals scored
1Because Lokomotiv Astana, the winners of the 2010 Kazakhstan Cup, did not exist for at least three years and could not obtain a UEFA license, the second-placed team of the league, Aktobe, moved up to enter the second qualifying round, and the cup runners-up, Shakhter Karagandy, claimed the vacant Europa League spot in the first qualifying round.[4]
(C) = Champion; (R) = Relegated; (P) = Promoted; (E) = Eliminated; (O) = Play-off winner; (A) = Advances to a further round.
Only applicable when the season is not finished:
(Q) = Qualified to the phase of tournament indicated; (TQ) = Qualified to tournament, but not yet to the particular phase indicated; (RQ) = Qualified to the relegation tournament indicated; (DQ) = Disqualified from tournament.

During these matches, each team played each other team twice (once at home and once away).

During these matches, each team played every other team in their half of the table twice (once at home and once away).