2010 Latvian Higher League (Latvian: LMT Virslīga 2010) was the 19th season of top-tier football in Latvia. It began on 9 April 2010 with the first round of games. Liepājas Metalurgs were the defending champions, having won their second league title last season.

With the re-expansion of the league to 10 clubs, the format of the competition was altered for the third year in a row. The ten clubs played 18 rounds of matches, once at home and once away, against each of the other nine clubs in the league. After this, another nine rounds of matches were played for a total of 27 matches. The clubs finishing in the first five positions after 18 rounds received the benefit of hosting five of their last nine matches.[1]

Due to a match fixing scandal last season, Dinaburg FC were excluded from the Latvian Higher League and were relegated to the Latvian First League.[2][3]

Despite finishing last year's First Division competition in 9th place, Daugava Daugavpils were offered a place in this year's Higher League competition, which the club accepted. 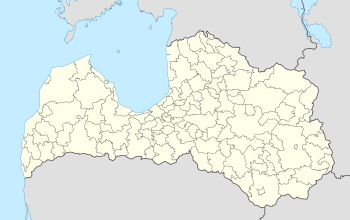 Daugava
Location of teams in the 2010 Latvian Higher League

Source: Latvian Football Federation (Latvian)
1 ^ The home team is listed in the left-hand column.
2Jelgava were assigned as home team for both first and second round of matches against Olimps/RFS for unknown reasons; this match was the latter of these two and has been put in this table cell for organisatorical reasons.
Colours: Blue = home team win; Yellow = draw; Red = away team win.

* Players in italics left the clubs they are listed in during the season.

Nathan Júnior from Skonto also scored 18 goals during the season, but while Rakels had scored all his goals from game-play, Junior netted 3 goals from the penalty spot.

Team of the tournament