The Moscow Victory Day Parade of 2010 was held on 9 May 2010 to commemorate the 65th anniversary of the capitulation of Nazi Germany in 1945. The parade marks the Soviet Union's victory in the Great Patriotic War.

It was the largest parade held in Moscow, Russia since the Soviet Union's dissolution in 1991, and saw 11,135 troops, 127 aircraft and helicopters, and the new Topol-M mobile intercontinental ballistic missile taking part. For the first time, the 2010 parade also included military units from foreign countries who were allied with the Soviet Union during World War II, with representation from France, Poland, the United Kingdom, the United States and members of the Commonwealth of Independent States.

The 9 May Victory Day Parade in Moscow involved more than 10,000 troops marching, 160 military vehicles and 127 military aircraft, making it the largest parade to be held since the dissolution of the Soviet Union in 1991.[1]

Foreign troops march on Red Square as part of Victory Day celebrations for the first time.

The 2010 Parade marked the first time that foreign and Commonwealth of Independent States (CIS) soldiers joined Russian forces on Red Square for the parade.[1][4] Battalions from the CIS included Armenia, Azerbaijan, Belarus, Kazakhstan, Kyrgyzstan, Moldova, Tajikistan and Ukraine among them. Upon request from the government of Turkmenistan, the contingent from Turkmenistan was led by an officer riding on horseback, with the horse being flown into Moscow from Ashgabat.[5] Poland was represented by the Representative Battalion of the Polish Armed Forces.[5] The United Kingdom was represented by a detachment of 76 soldiers from Number 2 Company, 1st Battalion, Welsh Guards, the Central Band of the Royal Air Force and the Band of the Royal Air Force Regiment.[1] The United States was represented by the 2nd Battalion of the 18th Infantry Regiment and the Naval Forces Europe Band. France was represented by pilots and aircraft from the Normandie-Niemen Air Regiment. Russian President Dmitry Medvedev called the inclusion of foreign troops in the parade recognition of their "common victory" in World War II.[6]

The inclusion of foreign troops in the parade was not without controversy. The Communist Party of the Russian Federation held a May Day rally in Moscow, at which several thousand protesters used the rally to decry the inclusion of troops from NATO countries in the parade.[7] A poll run by the Levada Center saw 20 percent of respondents disapproving of the presence of foreign troops, with 8 percent being strongly opposed.[6] 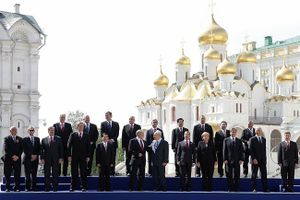 Mihai Ghimpu, the Acting President of Moldova, stated in late April 2010, after previously accepting an invitation from Russian President Dmitry Medvedev to attend the celebrations, that he would not be attending, claiming "I have no ties with Moscow. Only the victorious are going, what will the defeated do there?" Concerns also arose that a Moldovan contingent would not be able to attend the parade because of financial difficulties in the country, but a Moldovan government source told Kommersant that this was only an excuse, and Ghimpu was choosing to improve Moldova's relations with Romania, which was not invited to attend the celebrations as it was an ally of Germany during World War II.[8] Russian Foreign Minister Sergey Lavrov responded to remarks by Ghimpu, which also included the opinion that Russia should pay Moldova compensation for what he claimed was a "Soviet occupation", by urging Moldovan authorities not to use the occasion for political speculation.[9] King Michael of Romania, one of the last heads of state alive from World War II, was invited by Russian president Medvedev to attend the ceremony.[10]

German Chancellor Angela Merkel confirmed her attendance on 30 April,[11] as did Acting President of Poland Bronisław Komorowski.[12] Komorowski's attendance is said to be part of an effort to bolster Poland–Russia relations, which improved after the death of Polish President Lech Kaczyński in a plane crash near Smolensk in early April 2010.[12] Kaczyński is said to have confirmed his attendance at the parade shortly prior to the crash in which he was killed,[12] with reports in the week prior to his death showing that he was questioning his attendance.[13]

Both the United Kingdom and the United States had planned to send high-profile representatives. Gordon Brown, the Prime Minister of the United Kingdom, was invited to Russia, but because of the UK general election he was unable to attend; the Foreign and Commonwealth Office suggested Charles, Prince of Wales, instead. Barack Obama, the President of the United States, was also unable to attend, but offered Vice President Joe Biden as the US representative; Biden was in Brussels as part of US efforts to improve relations with the European Union.[22][23] According to The Guardian, both figures were rejected by Russian Prime Minister Vladimir Putin, however, in what both countries perceived as a diplomatic snub. This was put down to poor British relations with Russia over the UK's continuing refusal to extradite Boris Berezovsky over Russian charges of embezzlement, and because of Biden's close relations with Georgian President Mikheil Saakashvili, who is widely unpopular in Russia because of the 2008 Russia–Georgia War. The UK and US were instead represented by their ambassadors to Russia, Dame Anne Pringle and John Beyrle respectively.[23]

The list of heads of foreign states, governments and international organisations that attended the parade were:[24]

At 10:00am (MSK), the clock of Spasskaya Tower in the Moscow Kremlin rang and signalled the beginning of the parade commemorating the defeat of Nazi Germany by the Union of Soviet Socialist Republics in the Great Patriotic War. The event then began with the display of the flag of Russia and the Victory Banner. After this, commander of the Moscow Military District Colonel General Valery Gerasimov, who commanded the parade, and Anatoly Serdyukov, the Russian Minister of Defence, who inspected the parade, joined and inspected the troops. At 10:14am, Serdyukov reported to Supreme Commander-in-Chief, and Russian President, Dmitry Medvedev on the readiness of the troops.[25]

After this President Medvedev made a speech in which he stated, "Sixty-five years ago Nazism was vanquished. The machine that was wiping out whole nations was stopped. Peace returned to our country and to Europe as a whole. An end was put to the ideology that was destroying the fundamentals of civilisation." Medvedev also emphasised the role the Soviet Union played in the war, bearing the brunt of Nazi attacks, in which some three-quarters of their military forces participated.[25][26]

After his speech and the playing of the National Anthem of the Russian Federation, a parade of troops took place on Red Square, led by the Drummers' Company of the Moscow Military Conservatoire, Military University of the MDRF. Some 10,500 thousand troops marched, and approximately 1,000 troops from the Commonwealth of Independent States, Poland, the United Kingdom, France and the United States also marched. This was followed by a procession of 161 pieces of military hardware through Red Square, and 127 aircraft and helicopters making a flypast over the Kremlin to form the number "65".[25]

The historical part of the parade began with the entry onto Red Square of infantry, air force and navy representatives in uniforms resplendent of the Great Patriotic War. Behind them troops from Armenia, Azerbaijan, Belarus, Kazakhstan, Kyrgyzstan, Moldova, Tajikistan and Ukraine marched. Each of these nations of the Commonwealth of Independent States were represented by some 70 troops. Following the participants from the CIS, was a guard of honour from the Polish Army, and they were followed by 71 members of the British Army, 76 members of the United States military, and 68 members of the French military. At the rear of the foreign segment of the parade were 68 troops from Turkmenistan, led by a commander riding on horseback, of which the horse has blood-lines to the horse lent to Marshal Georgy Zhukov by Stalin for the original parade.[25] It was followed by the Presidential Regiment Cavalry Escort Squadron, wearing GPW uniforms of the Soviet Cavalry forces. 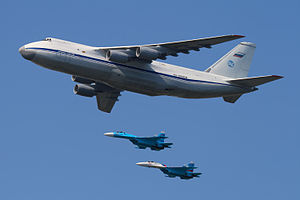 Antonov An-124 of 224th Flight Unit with 2 Sukhoi Su-27s of the Falcons of Russia aerobatic team.