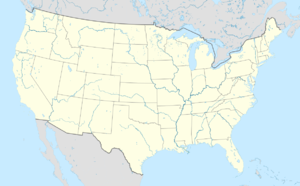 The 2012 Democratic National Convention was a gathering, held from September 4 to September 6, 2012,[5][6] in Charlotte, North Carolina, in which delegates of the Democratic Party chose the party's nominees for President and Vice President in the 2012 United States national election.

On April 3, 2012, President Barack Obama won the Maryland and District of Columbia primaries, giving him more than the required 2,778 delegates to secure the presidential nomination.[7] He had previously announced that Vice President Joe Biden would remain as his vice presidential running mate in his re-election bid.[8]

Choice of Charlotte for convention site 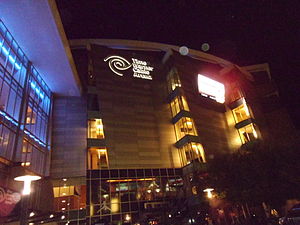 First Lady Michelle Obama announced on February 1, 2011, in an email to supporters that Charlotte, North Carolina, had been chosen as the site for the 2012 Convention.[9][10][11] The event was the first nominating convention of a major party ever held in North Carolina.[1] Charlotte was one of four finalists announced by the Democratic National Committee (DNC) on June 30, 2010, the others being Cleveland, Minneapolis and St. Louis.[12][13] It was expected that Charlotte's hosting of this event would generate more than $150 million for Charlotte and surrounding metropolitan areas and bring over 35,000 delegates and visitors.[14][15] North Carolina was a closely contested state in the 2008 presidential election, with Barack Obama winning the state's 15 electoral votes by just 13,692 votes (out of more than 4.2 million votes cast) and Democrats Kay Hagan and Bev Perdue winning close elections for U.S. Senate and Governor, respectively.[16]

All three dates of the convention were held at the Time Warner Cable Arena. The last night, Thursday, September 6, was originally scheduled to be held at the 72,000-seat Bank of America Stadium, where presumptive presidential nominee Barack Obama was to deliver his acceptance speech.[17] After Convention officials insisted that they would hold Thursday's activities at the stadium "rain or shine",[18] the venue was moved to the 20,000 seat indoor arena "... due to thunderstorm threat."[19] Some in the media questioned the move, wondering whether it was motivated more by an inability to fill the 70,000 seat stadium and the possibility that empty seats would show a lack of enthusiasm.[20] The risk of severe weather wasn't high;[21] Charlotte NBC affiliate WCNC-TV chief meteorologist Brad Panovich tweeted that the "[s]evere threat is almost zero Thursday night & chance of rain is 20%", adding, "It's a simple question...if you had a Panthers game, concert or soccer match with a 20% chance of storms would you cancel 24 hrs prior?"[21] The date of Obama's acceptance speech caused the National Football League to move the Kickoff game, normally on a Thursday, to Wednesday, September 5, to avoid a conflict.[22] This in turn caused the DNC to move Joe Biden's vice presidential acceptance speech, normally held the day before the presidential acceptance speech, to Thursday, before Obama's speech, to avoid a conflict with the NFL game.[23]

In the opening session on September 4, the keynote speech was delivered by 37-year-old San Antonio Mayor Julian Castro. In his speech, Castro stated that "the Romney-Ryan budget … doesn't just pummel the middle class, it dismantles it...it dismantles what generations before have built to ensure that everybody can enter and stay in the middle class" and that "Now we need to make a choice...a choice between a country where the middle class pays more so that millionaires can pay less, or a country where everybody pays their fair share, so we can reduce the deficit and create the jobs of the future. It's a choice between a nation that slashes funding for our schools and guts Pell Grants, or a nation that invests more in education. It's a choice between a politician who rewards companies that ship American jobs overseas, or a leader who brings jobs back home...this is the choice before us … Our choice is a man who has always chosen us. A man who already is our president, Barack Obama", with the Global Post describing the audience as "adoring and appreciative" and the speech as "powerful words, and the audience responded with gratitude."[24]

First Lady Michelle Obama gave the final speech of the evening, stating that "Barack knows what it means when a family struggles...he knows what it means to want something more for your kids and grandkids. Barack knows the American dream because he's lived it, and he wants everyone in this country to have that same opportunity, no matter who we are, or where we're from, or what we look like, or who we love." Her speech lasted 25 minutes and focused on the Barack Obama she fell in love with as well as the strength of the American Spirit and those in the military. "I've seen it in our men and women in uniform and our proud military families…in a young man blinded by a bomb in Afghanistan who said simply, 'I'd give my eyes 100 times again to have the chance to do what I have done, and what I can still do."[25] Jim Rutenberg, of the New York Times, described the crowd as "electrified" by her remarks, "her impassioned delivery drawing the crowd to its feet."[26]

David Foster was identified as a former employee of Bain Capital, advertised as an employee of GST Steel during Bain's acquisition of the then-bankrupt company in 2001, after Romney had taken a leave of absence for the company. Foster, however, was never a GST Steel employee; instead, he was an employee of the United Steelworkers of America assigned to organize the local chapter of the union.[31]

Bill Clinton officially nominated Obama for re-election and Obama was nominated unanimously by the 5,556 delegates of the convention. During the roll call, Mississippi delayed its vote so Ohio could give Obama the nomination, putting the tally over the top of 2,778 votes.[32] The roll call continued while delegates started to leave and ended with Wyoming casting its votes in an almost empty hall.

The original 2012 party platform caused controversy after it was written, because the typical invocations and references to God and God-given rights were omitted, and language affirming the role of Jerusalem as the capital of Israel was removed. On Wednesday, September 5, former Ohio Governor Ted Strickland introduced an amendment on the floor of the convention to reinsert language invoking God and recognizing Jerusalem as Israel's capital. Convention chairman Antonio Villaraigosa put the amendment to a voice vote requiring a two-thirds majority for passage. After the first vote was indecisive, Villaraigosa called for a second vote, which was again met with an equal volume of "ayes" and "nos". A woman standing to his left said, "You've got to rule, and then you've got to let them do what they're gonna do." Villaraigosa called a third vote with the same result. Villaraigosa then declared the amendment passed, causing an eruption of boos on the floor.[33]

During the last night, as Senator Kerry and retired Admiral Nathman spoke there was a montage of military ships and aircraft,[37] as a tribute to veterans;[38] the ships were Russian warships,[38] and the aircraft were Turkish F-5s.[37] The Democratic National Convention Committee later apologized for the featuring of Russian warships.[39]

Protest activity and demonstrations was anticipated at the convention. Over ninety organizations[40] gathered into a group known as the Coalition to March on Wall St. South, and have declared their intention to protest at the convention.[41] The left-leaning coalition reflects the rhetoric and ideology of the Occupy Wall Street Movement, and several Occupations from North Carolina are endorsers of the coalition.[40] Demonstrators say they want to call attention to the influence of corporations on politics as well as the role of the military-industrial complex in US politics; they have scheduled a dance party to honor imprisoned soldier Bradley Manning.[42] One group of undocumented immigrant workers is traveling to the convention via bus, "The Undocubus." They risk deportation if they are arrested for civil disobedience.[43][44]

In anticipation of protest activity, the city of Charlotte has also passed a variety of new ordinances. These include:

The DNC has been designated a National Special Security Event, which means that the Secret Service and Department of Homeland Security will do some of the policing. The Charlotte Police Department will be responsible for the areas outside the convention venues. Police note that it will be relatively easy to surround protestors in the city's downtown business district, which is enclosed by expressway.[46]

By contract the DNC required Charlotte to create a demonstration area for people to exercise their First Amendment rights. Eventually the city of Charlotte became an open Free Speech Zone with peaceful protests, pickets, and pamphlets throughout the city.[50]

After North Carolina voters passed Amendment 1, on May 8, 2012, banning same-sex marriage in the state, several groups called for the DNC to pull the convention out of Charlotte.[51] Unions have also complained about North Carolina's labor laws.[52][53] However, the DNC said that they would still proceed with their plans to hold it in the state.[54]

The leader of the Democratic National Committee Debbie Wasserman Schultz verified in an interview that North Carolina was chosen due to the controversy in the state and stated that it is "a critical battleground". When questioned about being able to raise the funds for the convention Schultz stated "We're not having a hard time raising the funds", contrary to reports.[55]

Randall Terry, a vocal pro-life advocate and former Republican congressional and state senate candidate, received a large enough percentage of votes in the Oklahoma Primary to receive as many as seven delegates. However, the DNC has declared him as "illegitimate"[56] because he failed to inform the Oklahoma Democratic Party of the names of his delegates.[57] As such, no Terry delegates were in attendance.[57] Keith Russell Judd and John Wolfe, Jr., who have also both qualified for delegates to the convention by virtue of their performances in West Virginia (in Judd's case), Arkansas and Louisiana (in Wolfe's), face similar obstacles to having their delegates seated.[58][59][60] Wolfe commenced legal proceedings to have delegates in his name seated[61] but lost his case one week prior to the start of the convention.[62]

The Democratic Party announced in February 2011 that it would not accept corporate donations to fund the convention.[63] This decision was made to increase the party's populist appeal and create distance from Bank of America and the financial industry.[64] As of June 2012, the convention was $27 million short of its fundraising goals and consequently canceled some planned events.[65] (The last DNC raised $33 million from corporate donors.)[66]

Corporate sponsors can make in-kind donations such as transportation, as well as host parties.[63] They can also donate to a non-profit called "New American City, Inc.", which is run by the directors of the convention host committee.[52] New American City, incorporated on April 4, 2011, exists to "defray administrative expenses incurred by the host committee organizations". (The host committee, in turn, provides "goods, facilities, equipment and services".)[67]

Donors to this group include Bank of America, Wells Fargo and Duke Energy.[68]

The Party's convention funds are stored in a Bank of America account.[52] The convention also has a $10 million line of credit available from Duke Energy.[68]