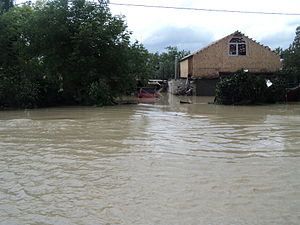 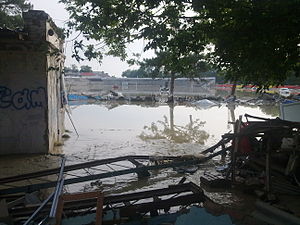 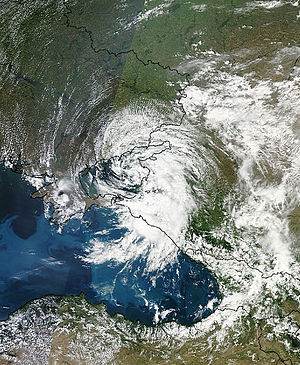 Satellite image of Russia's Krasnodar region along the northeast coast of the Black Sea, taken at 09:30 UTC Friday, 6 July 2012. 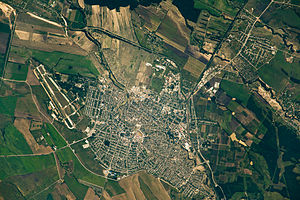 The 2012 Krasnodar Krai floods occurred in southwest Russia in early July, mainly in Krasnodar Krai near the coast of the Black Sea.[1] The equivalent of five months of rain fell overnight in some southern parts of the country according to the Hydrometeorological Centre of Russia.[2] 171 people died during the floods,[3][4] and Russian police said the floods damaged the homes of nearly 13,000 people.[5] According to the governor of Krasnodar Krai, Alexander Tkachyov, "there was nothing of the kind for the last 70 years".[6] The flood was part of the aftermath of an intense storm that hit Krasnodar, dropping almost half a year’s worth of rainfall on the region over two days.[1] Close to 30,000 people were affected by the floods.[3]

Most of the victims lived in the city of Krymsk, 80 km (50 mi) from Krasnodar and 15 km (9 mi) from Novorossiysk, at the foot of a minor mountain range running along the coast of the Black Sea. Eyewitnesses reported that the flood hit the city around 2 a.m. local time on 7 July 2012 when most residents were asleep. The flood wave reached the height of 7 m (23 ft), submerging many houses to the ceiling and drowning those who could not escape in time.[6] There were also deaths on the coast of the Black Sea in Gelendzhik, a resort, and in Novorossiysk, a port.[7]

According to reports, the rainfall totaled 275 mm (10.83 in) of rain over the region, equivalent to three or four months' worth of precipitation in a typical year.[2][8]

The Russian government has acknowledged that it was aware of the rising waters at 10:00 p.m. Friday night but failed to adequately notify the residents of Krymsk of the approaching flood, which arrived at 2:00 a.m. Sirens were sounded and warning issued over loudspeakers but most residents were asleep. The head of the Krymsk district council, Vasily Krutko, was dismissed. In August 2013, a Russian investigation convicted Krutko guilty of negligence.[7][9][10]

Russian Prime Minister Dmitry Medvedev has set up a commission to help the victims.[11] On 7 July, Russian President Vladimir Putin arrived at the area and held a meeting with the representatives of all the services involved in search operations and tackling the consequences of the disaster, and then left to Gelendzhik which also suffered seriously.[12] Earlier on the same day, Russian Emergency Situations Minister Vladimir Puchkov said those people whose houses were totally destroyed by the floods will receive 100,000 rubles compensation (about $3,000), and that 50,000 rubles ($1,500) will be paid to the residents whose dwellings were damaged. Approximately 5,200 homes have been affected by the disaster.[13]

On 8 July 2012, Putin signed a presidential decree declaring 9 July a day of mourning in Russia for the victims of a bus crash in Ukraine and the devastating floods. "Cultural organizations, and also state television channels, have been recommended to refrain from demonstrating entertainment programs" the press office said in a statement. Under the presidential decree, state flags in Russia and in its overseas missions will be flown half-mast on 9 July owing to the Day of Mourning.[14]

The head of the liberal opposition Yabloko party, Sergey Mitrokhin, said on his Twitter feed that local activists had blamed the ferocity of the flood on the opening of sluice gates at a reservoir but Krasnodar's regional administration dismissed the allegation as "absolute nonsense", RIA Novosti news agency said.[15] Furthermore, there are no controllable sluice gates in the nearby Neberdzhaevskoe reservoir, thus refuting the allegation.[16][17][18]

On 14 July About 2,000 tons of humanitarian aid had been delivered to Krymsk, according to a spokesman for the local emergencies administration. The humanitarian aid included safe drinking water, foodstuffs, bed linen, hygiene items, and children's clothes. Humanitarian aid arrived from Azerbaijan, Belarus, Adygea, Kalmykia, Dagestan, Ingushetia, Kabardino-Balkaria, Karachay-Cherkessia, North Ossetia, the Astrakhan, Volgograd, Rostov, Moscow and Tula regions, and from the city of Moscow.[19]

A day later the Krasnodar Krai administration said in a statement posted on its website that Russia’s regional and federal governments will allocate almost 9 billion rubles ($280 million) to restore Krymsk.[20]

Oil pipeline operator Transneft said it halted crude shipments out of Novorossiysk, but that its infrastructure in the port was unaffected by the weather.[15]