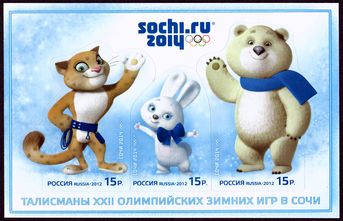 The three mascots of the Winter Olympics 2014 depicted on Russian stamps.

Along with the 2008 Russian presidential election, on 2 March 2008 there was an unofficial election held in Sochi to elect the mascot for the 2014 Winter Olympics. 270,000 voters along with their ballots received a coupon with four mascot candidates: Ded Moroz, a snowflake, a polar bear and a dolphin. According to a representative of Sochi city administration, the majority of Sochians voted for the dolphin.[3] However, representatives of the Sochi Organizing Committee for the Games, which is to officially elect a logo and a mascot, commented that while respecting the opinion of Sochians, such a procedure is usually held later. They also pointed out, that the final version of the mascot should be a consensus of opinions of all citizens of the country and the result of work by professional designers and market analysts.[4] 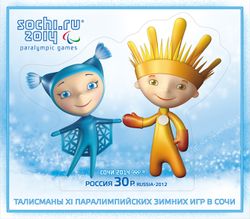 The two mascots of the 2014 Paralympic Games depicted on the Russian 30 ruble stamp.

A short list of designs were announced in December 2010, after a jury had reviewed thousands of designs.[2] It was now down to 11 design ideas for the Olympic Games, and 2 design ideas for the Paralympic Games. The shortlisted designs were presented to the public on February 7, 2011. A live national TV broadcast, on Russia's Channel One,[6] included a nationwide text message voting, where Russians voted for their favorite mascot.[2]

Despite the success of the mascot selection process, some accusations have been brought against the mascots. The possibility of telephone vote rigging was brought up when the mascot that Prime Minister Vladimir Putin had said was his favorite, the leopard, polled the most votes in the voting process after a sharp climb in the number of votes. The chosen mascots have been criticized[by whom?] as bad choices that do not represent Russia and are simply results of sheer poor taste. Also, Viktor Chizhikov, the designer of the 1980 Moscow Games mascot Misha, accused the designer of the bear mascot for the Sochi Games of plagiarism, noting that the bear's facial features were all taken from his own work. The bear was also seen by politician Sergey Mironov as resembling the mascot of the United Russia political party, the current ruling party, leading to accusations of political propaganda.[9]

Zoich (or ZOIЧ) was a proposed mascot for the XXII Winter Olympics, which took first place in the official online poll to select a mascot for the 2014 Sochi games. Despite being a popular Internet character, the committee chose not to introduce it to the final round of the voting. Upon introduction and until the end of the online voting, it was the most popular mascot from those submitted. It also took only about 40 minutes for Zoich to take the top spot.