In 1993, the division was reactivated as the 75th Division (Training Support) in the Army Reserve, and remains active. In January 2003, numerous units of the 75th Division (Training Support) were mobilized to train other Army Reserve and National Guard units deploying overseas in support of Operation Iraqi Freedom/Operation Enduring Freedom (OIF/OEF). Several of the division's units remain mobilized even to the present day. 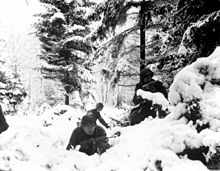 Soldiers of the 290th Infantry Regiment in the Ardennes during the Battle of the Bulge (Amonines, Belgium 4 January 1945)

These combat chronicles, current as of October 1948, are drawn from The Army Almanac: A Book of Facts Concerning the Army of the United States.[3]

The 75th Infantry Division arrived in Britain, 22 November 1944; headquarters having arrived on 2 November 1944. After a brief training program, the division landed at Le Havre and Rouen, 13 December, and bivouacked at Yvetot on the 14th. When the Von Rundstedt offensive broke in the Ardennes, the 75th was rushed to the front and entered defensive combat, 23 December 1944, alongside the Ourthe River, advanced to the Aisne River, and entered Grandmenil, 5 January 1945. The division relieved the 82d Airborne Division along the Salm River, 8 January, and strengthened its defensive positions until 17 January when it attacked, taking Vielsalm and other towns in the area.

Shifting to the Seventh Army area in Alsace—Lorraine, the 75th crossed the Colmar Canal, 1 February, and took part in the liberation of Colmar and in the fighting between the Rhine River and the Vosges Mountains. It crossed the Marne-Rhine Canal and reached the Rhine, 7 February. After a brief rest at Lunéville, it returned to combat, relieving the 6th British Airborne Division on a 24-mile (39 km) defensive front along the Maas River, near Roermond, in the Netherlands, on 21 February. From 13 to 23 March, the 75th patrolled a sector along the west bank of the Rhine from Wesel to Homburg, and probed enemy defenses at night.

On 24 March, elements crossed the Rhine in the wake of the 30th and 79th Divisions. Pursuit of the enemy continued as the 75th cleared the Haard Forest, 1 April, crossed the Dortmund-Ems Canal on the 4th, and cleared the approaches to Dortmund, which fell to the 95th Division, 13 April. After taking Herdecke, 13 April, the division moved to Braumbauer for rest and rehabilitation, then took over security and military government duties in Westphalia.

The 75th Training Command (Mission Command) is separated into an HHC and five subordinate divisions, each of which is separated into three training brigades. The 75th Training Command (MC) and its subordinate divisions are the only entities that have the mission and capability to train reserve component forces in the full Mission Command Staff Training (MCST) continuum. The command executes MCST in all phases of the ARFORGEN culminating in the preparation of battalions, brigades and higher-level headquarters (HQs) for deployment in the available phase of the ARFORGEN rotation.

75th Training Command Vision Statement: To be the premier provider of realistic and relevant battle-focused command and staff training in a digital (ABCS) contemporary operating environment, making the total force ready for any worldwide mission.