22nd Presidium of the Communist Party of the Soviet Union

From Infogalactic: the planetary knowledge core
Jump to: navigation, search
Presidium chairmen
150px
Khrushchev chaired the Presidium from 1955 to 1964. 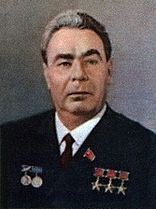 Brezhnev succeeded Khrushchev in 1964, and chaired the Presidium until 1982.

The Central Committee was, according to sovietologists Merle Fainsod and Jerry F. Hough, elected unanimously at the 22nd Party Congress (17–31 October 1961).[5] The 22nd Central Committee in turn elected the Politburo unanimously.[5] Brezhnev, the Chairman of the Presidium of the Supreme Soviet, was considered as an alternative to Kozlov as Second Secretary, but was instead made Third Secretary, the secretary responsible for industry. In 1963, for unknown reasons, possibly health reasons, Brezhnev took over Kozlov's duties at the Secretariat, and became the de facto Second Secretary. When a Western journalist asked Khrushchev in 1963 who would succeed him, Khrushchev responded bluntly "Brezhnev".[6] After a prolonged power struggle, Khrushchev was ousted from power,[7] and a collective leadership led by Brezhnev, Kosygin, Podgorny,[8] Mikhail Suslov[9] and Andrei Kirilenko[10] was formed.

In the months following Khrushchev's ousting, three members were elected to the Presidium: Alexander Shelepin, the Chairman of the State Control Commission; Petro Shelest, the First Secretary of the Communist Party of Ukraine; and Kirill Mazurov, a First Deputy Chairman of the Council of Ministers.[11] While Brezhnev may have been General Secretary, he did not have a majority in the Presidium; when Kosygin and Podgorny agreed on policy, which was not often the case, Brezhnev found himself in the minority. Brezhnev could only count on three to four votes in the Presidium: Suslov, who often switched sides, Kirilenko, Pelše and Dmitry Polyansky.[12] Brezhnev and Kosygin often disagreed on policy; Brezhnev was a conservative while Kosygin was a modest reformer. Kosygin, who had begun his premiership as Brezhnev's equal, lost much power and influence within the Presidium when he introduced the 1965–1971 Soviet economic reform.[13]

General
Full- and candidate membership of the Presidium were taken from these sources: