The 24-hour clock is the convention of time keeping in which the day runs from midnight to midnight and is divided into 24 hours, indicated by the hours passed since midnight, from 0 to 23. This system is the most commonly used time notation in the world today,[1] and is used by international standard ISO 8601.[2] In the practice of medicine, the 24-hour clock is generally used in documentation of care as it prevents any ambiguity as to when events occurred in a patient's medical history.[3] It is popularly referred to as military time in the United States, English-speaking Canada,[4] and a handful of other countries[1] where the 12-hour clock is still dominant. 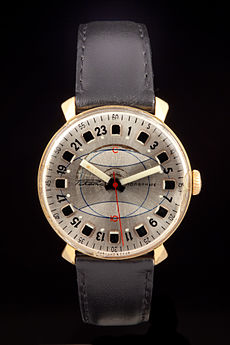 A Russian 24 hour watch for polar expeditions from 1969, made by Soviet watchmaker Raketa. Polar nights or days make it necessary to use a 24-hour scale instead of 12.

A time of day is written in the 24-hour notation in the form hh:mm (for example 01:23) or hh:mm:ss (for example, 01:23:45), where hh (00 to 23) is the number of full hours that have passed since midnight, mm (00 to 59) is the number of full minutes that have passed since the last full hour, and ss (00 to 59) is the number of seconds since the last full minute. In the case of a leap second, the value of ss may extend to 60. A leading zero is added for numbers under 10. This zero is optional for the hours, but very commonly used in computer applications, where many specifications require it (for example, ISO 8601).

Where subsecond resolution is required, the seconds can be a decimal fraction; that is, the fractional part follows a decimal dot or comma, as in 01:23:45.678. The most commonly used separator symbol between hours, minutes and seconds is the colon, which is also the symbol used in ISO 8601. In the past, some European countries used the dot on the line as a separator, but most national standards on time notation have since then been changed to the international standard colon. In some contexts (including the U.S. military and some computer protocols), no separator is used and times are written as, for example, "2359".

File:Railtime.jpg
Example of a railway timetable showing both 00:00 (for departure times) and 24:00 (for arrival times).

While the 24-hour notation unambiguously distinguishes between midnight at the start (00:00) and end (24:00) of any given date, there is no commonly accepted distinction among users of the 12-hour notation. Style guides and military communication regulations in some English-speaking countries discourage the use of 24:00 even in the 24-hour notation, and recommend reporting times near midnight as 23:59 or 00:01 instead.[6] Sometimes the use of 00:00 is also avoided.[6] In variance with this, the correspondence manual for the U.S. Navy and U.S. Marine Corps formerly specified 0001 to 2400.[7] The manual was updated in June 2015 to use 0000 to 2359. [8]

Time-of-day notations beyond 24:00 (such as 24:01 or 25:59 instead of 00:01 or 01:59) are not commonly used and not covered by the relevant standards. However, they have been used occasionally in some special contexts in the UK, Japan, Hong Kong and China where business hours extend beyond midnight, such as broadcast television production and scheduling. They also appear in some public transport applications, such as Google's General Transit Feed Specification file format and some ticketing systems (e.g. in Copenhagen). This usage prevents a time period reported without dates from appearing to end before its beginning, e.g. 21:00–01:00.

In most countries, computers by default show the time in 24-hour notation. For example, Microsoft Windows and Mac OS activate the 12-hour notation by default only if a computer is in a handful of specific language and region settings. The 24-hour system is commonly used in text-based interfaces. Programs such as ls default to displaying timestamps in 24 hour format.

In English-speaking Canada and the United States, the term "military time" is a synonym for the 24-hour clock.[9] In these regions, the time of day is customarily given almost exclusively using the 12-hour clock notation, which counts the hours of the day as 12, 1, ..., 11 with suffixes "a.m." and "p.m." distinguishing the two diurnal repetitions of this sequence. The 24-hour clock is commonly used there only in some specialist areas (military, aviation, navigation, tourism, meteorology, astronomy, computing, logistics, emergency services, hospitals), where the ambiguities of the 12-hour notation are deemed too inconvenient, cumbersome, or dangerous.

Military usage, as agreed between the United States and allied English speaking military forces,[10] differs in some respects from other twenty-four-hour time systems: 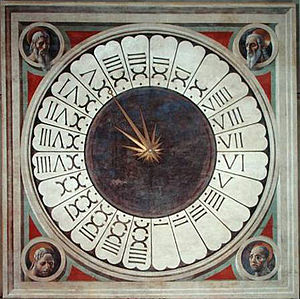 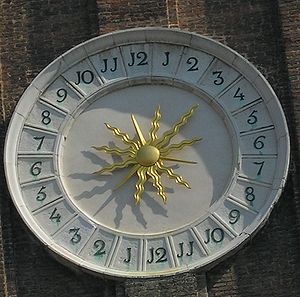 The 24-hour time system has its origins in the Egyptian astronomical system of decans, and has been used for centuries by scientists, astronomers, navigators, and horologists. There are many surviving examples of clocks built using the 24-hour system, including the famous Orloj in Prague, and the Shepherd gate clock at Greenwich.[citation needed]

At the International Meridian Conference in 1884, Lewis M. Rutherfurd proposed that:[11]

This universal day is to be a mean solar day; is to begin for all the world at the moment of midnight of the initial meridian coinciding with the beginning of the civil day and date of that meridian, and is to be counted from zero up to twenty-four hours.

This resolution was adopted by the conference.[11]

According to a report in the London Times in 1886, the 24-hour clock was in use on the Canadian Pacific Railway train at Port Arthur.[12]

In Britain, the use of the 24-hour clock in daily life has grown steadily since the beginning of the 20th century, although attempts to make the system official failed more than once.[17] In 1934, the BBC switched to the 24-hour clock for broadcast announcements and programme listings. The experiment was halted after five months following a lack of enthusiasm from the public, and the BBC continued using the 12-hour clock.[17] In the same year, the US airlines Pan American World Airways Corporation and Western Airlines both adopted the 24-hour clock.[18] In modern times, the BBC uses the 24-hour clock for the majority of their content.[17]

British Rail and London Transport switched to the 24-hour clock for timetables in 1964.[17]

In 2005, BBC Weather television forecasts used the 12-hour notation for several months after its graphical revamp. After complaints from the public, however, this was switched to 24-hour notation.[citation needed] 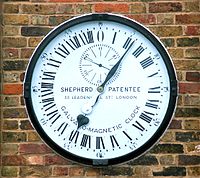 The Shepherd gate clock with Roman numbers up to XXIII (23 and 0 for midnight), in Greenwich