24 Preludes and Fugues, Op. 87 by Dmitri Shostakovich is a set of 24 pieces (that is, 24 prelude-fugue pairs) for solo piano, one in each of the major and minor keys of the chromatic scale. The cycle was composed in the years 1950/51 while Shostakovich was in Moscow, and premiered by pianist Tatiana Nikolayeva in Leningrad in December 1952;[1] it was published the same year. The complete work takes about two and a half hours to play. It is considered one of the greatest examples of music written in all major and/or minor keys. 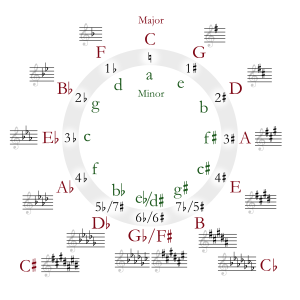 The circle of fifths

Each piece is in two parts—a prelude and a fugue—varying in pace, length and complexity (for example, Fugue No. 13 in F-sharp major is in five voices, but Fugue No. 9 in E major is in only two voices).

The pieces proceed in relative major/minor pairs around the circle of fifths: first C major and A minor (prelude and fugue nos. 1 and 2), then to one sharp (G major, E minor), two sharps (D major, B minor), and so on, ending with D minor (1 flat). (Frédéric Chopin's set of 24 Preludes, Op. 28, is organised in the same way, as are the earlier sets of preludes by Joseph Christoph Kessler, Johann Nepomuk Hummel, and Shostakovich's earlier 24 Preludes, Op. 34.)

Relationship to Bach's The Well-Tempered Clavier

J.S. Bach's The Well-Tempered Clavier, an earlier set of 48 preludes and fugues, is widely held to be the direct inspiration for Shostakovich's cycle, largely based on the work's composition history (see below).

References to and quotations from Bach's cycle appear throughout the work.[2] For example, Shostakovich begins his C major prelude, the first piece in the cycle, with exactly the same notes that Bach uses in his own C major prelude, BWV 846, which likewise begins The Well-Tempered Clavier. Likewise, the composers' second fugues (A minor for Shostakovich, C minor for Bach) utilize very similar opening rhythms for their fugue subjects (two 16th notes followed by 3 eighth notes, twice in a row). In addition to more direct quotation, Shostakovich also at points imitates the various types of preludes found in the Bach cycle (and in other, similar, Baroque compositions). For example, his A minor prelude is a figuration prelude—a prelude in which the same hand position is used throughout the piece. Examples of this abound in Baroque keyboard literature from composers such as Johann Caspar Ferdinand Fischer, from whom Bach drew inspiration for his own figuration preludes (the C major and the D minor, for example).[3]

On a larger scale, the whole structure, ordered and sequenced as it is with no apparent extra-musical narrative, is largely a response to Bach. It is important to note, however, that in Bach's cycle the pieces are arranged in parallel major/minor pairs ascending the chromatic scale (C major, C minor, C-sharp major, C-sharp minor etc.), which differs from Shostakovich's Op. 87.

There are also several references and musical ideas taken from Shostakovich's own work.

After the Second World War, Dmitri Shostakovich was Russia's most prominent composer. Although out of favour with the Soviet Communist Party, he was still sent abroad as a cultural ambassador. One such trip was to Leipzig in 1950 for a music festival marking the bicentennial of J. S. Bach's death.

As part of the festival, Shostakovich was asked to sit on the judging panel for the first International Johann Sebastian Bach Competition. One of the entrants in the competition was the 26-year-old Tatiana Nikolayeva from Moscow. Though not required by competition regulations, she had come prepared to play any of the 48 preludes and fugues of The Well-Tempered Clavier on request. She won the gold medal.

Inspired by the competition and impressed by Nikolayeva's playing, Shostakovich returned to Moscow and started composing his own cycle of 24 preludes and fugues. Shostakovich worked fairly quickly, taking only three days on average to write each piece. As each was completed he would ask Nikolayeva to come and visit him in his Moscow apartment where he would play her the latest piece.

The complete work was written between 10 October 1950 and 25 February 1951. Once finished, Shostakovich dedicated the work to Nikolayeva, who undertook the public premiere in Leningrad on 23 December 1952. Shostakovich wrote out all the pieces without many corrections except the B-flat minor prelude, with which he was dissatisfied and replaced what he had begun initially.

Before premiering the work, Shostakovich privately performed the first half of the cycle before the Union of Composers (as was typical with new compositions during the Soviet Era) on 31 March 1951.[4]

The panel expressed great displeasure at the dissonance in some of the fugues. They also objected to the fugue in Soviet music because it was considered too Western and archaic.

This work is considered by many (e.g. music critic Alex Ross, musicologist Tanya Ursova, etc.) to be produced by the "other Shostakovich," or as a composition "for the desk drawer."[5][6] According to Ross, the composer used chamber forms in the period to channel his most personal compositions, those that would not be suitable for use or approval by the Soviet government. This work is included in that group along with several string quartets.

Notable complete recordings have been made by Keith Jarrett (ECM 1991), Vladimir Ashkenazy (Decca 1996-1998) and Konstantin Scherbakov (Naxos 1999). Sviatoslav Richter never played all the pieces in concerts but made notable recordings of 15 numbers.[9]Canadian pianist David Jalbert also recorded the piece for ATMA Classique in 2008.