Three elements of the 256th Infantry Brigade: the 156th Infantry Regiment; the 108th Cavalry Regiment; and the 1st Battalion, 141st Field Artillery Regiment, the "Washington Artillery" of New Orleans, trace their history back to the American Civil War where they fought mainly in the eastern theater under Robert E. Lee's Army of Northern Virginia. In September 1838, the Washington Artillery of New Orleans was founded. Its emblem was an irate tiger over crossed cannons, with the motto "Try Us" created by James B. Walton in 1846. During the Civil War, most units were referred to as "Lee's Tigers" or Louisiana Tigers and became the mascot for the Louisiana State University, also known as the "Old War Skule".

During train up for operations in the spring, summer and fall of 2004, the 256th Infantry Brigade was stationed at Fort Hood, Texas. The Brigade then completed a NTC rotation at Fort Irwin, California. The brigade spent another month training in the desert of Camp Buehring, Kuwait prior to moving into Iraq.

In 2004–2005, the 256th Brigade was sent to Iraq as part of OIF III (Operation Iraqi Freedom III, the third U.S. military rotation of forces into the area of operations). It served under the 1st Cavalry Division for its first five months and its last several months under the 3rd Infantry Division. During the first half of its combat tour in Iraq some of the brigade's subordinate units also served under the 10th Mountain Division. The brigade served in and around Baghdad, Iraq in a FOB known originally as FOB Victory until 15 June 2004. At this date FOB Victory's name was changed to FOB Liberty because on this date the Iraqi government officially "stood up". Upon the 256th's arrival at North Liberty it became Camp Tigerland. During operations in theater the brigade operated under the configuration of one-third heavy and two-thirds light.

Each battalion in the brigade had one company of heavy forces with M1A1 Abrams main battle tanks, M2A2 Bradley infantry fighting vehicles, or a mixture of the two. The other two thirds operated primarily from HMMWV Gun Trucks that mounted either machine guns or automatic grenade launchers. The field artillery battalion was cannibalized to bring the infantry battalions up to full strength. The remainder of the Washington Artillery was attached to the 1st Cavalry Division base defense operations center (BDOC) under the command of the 103rd Field Artillery Brigade and the XVIII Airborne Corps. One howitzer platoon from the Washington Artillery was used to provide indirect fires in support of FOB Liberty. Additionally, Task Force Bengal was "stood up" as a liaison/training team to equip, train and assist the 40th Iraqi National Guard (ING) Brigade. TF Bengal consisted of soldiers and officers of the infantry, field artillery, and engineer units from the 256th Brigade as well as the 1st Battalion, 69th Infantry (The Fighting 69th) from New York City which had been attached for the deployment. Attached to the 69th Infantry was Delta 101, a company of tankers and scouts turned infantrymen from New York's 101st Cavalry Regiment. During the American Civil War, the 69th engaged the ancestral units of the 256th many times, so their attachment to each other for OIF provided a symbolic reconciliation 140 years after they fought each other to the death repeatedly from 1861 to 1865. On 21 February 2005, the 40th ING Brigade assumed authority for approximately 16 square kilometers in and around Al Akadhimian and began patrolling with approximately 2800 soldiers.

On August 29, 2005, Hurricane Katrina struck the gulf coast of Louisiana and Mississippi[3] while most members of the 256th Infantry Brigade were still serving their final weeks of deployment in Iraq. Following the return of the brigade to Louisiana, a detachment immediately mobilized to New Orleans to aid law enforcement with rescue efforts. With the help of the Louisiana State Police, those efforts transitioned into a support mission for the New Orleans Police Department. Joint Task Force Gator was created to help combat the rise of looting and other crimes resulting from the loss of law enforcement officers in the New Orleans area. After three-and-a-half years of assisting local police and patrolling the city, the task force was released from duty on February 28, 2009.[4] 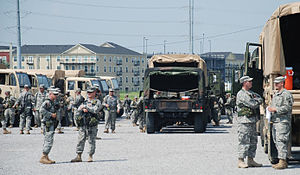 Members of the 256th IBCT stage their vehicles in Lot J next to the Ernest Morial Convention Center. These soldiers are activated for security missions in support of hurricane operations throughout the state.

On Monday 19 May 2008, Louisiana's 256th BCT was alerted by the Defense Department that they might begin a second tour in Iraq starting in spring 2010.[5][6] Brigades from the Texas, Pennsylvania, and Tennessee National Guards were also notified in the same press release. The press release specifically stated tours of duty in Iraq and Kuwait, and not Afghanistan. The notice of this deployment came within three years of the unit's return from their first tour of Iraq in 2004–05.

On 5 January 2010, the 256th BCT left for mobilization at Camp Shelby, Mississippi where soldiers trained for a variety of missions, such as PSD, FOB security, gate guard, convoy security, and more. In early March, they flew out of Gulf Coast Airport in Mississippi.

The brigade was divided into many different sections, being controlled by sustainment brigades and commands. The brigade commander, Col. Ball, did not command the entire brigade as subordinate units fell under other brigades. While select units returned home in August, the majority of brigade unit deployed back to home station in Louisiana in December 2010.

The saltire, symbol used on military maps to represent a brigade, stands for the organization. In addition, the saltire, which appears on the coat of arms of Nova Scotia and on the Confederate flag, alludes to the brigade’s home area whose early inhabitants were from Nova Scotia, and to the Confederacy of which Louisiana was a part. The fleur-de-lis, referring to the location of the brigade’s headquarters at Lafayette, stands for the French background and traditions of that part of the State. The center frond is red in reference to Lafayette’s original name, Vermilionville, and to nearby Bayou Vermilion. The combination of blue, for Infantry and gray, for the Confederacy, with red and gold also alludes to the branch colors for Artillery and various other components of the brigade. The rectangle shield shape is the traditional shape for shoulder sleeve insignia of brigades.

Until 2006, the 256th Brigade was a "heavy" brigade that consisted of 2 mechanized infantry battalions (2nd & 3rd Battalions, 156th Infantry Regiment) each equipped with 44 Bradley Fighting Vehicles, 1 armor battalion (1st Battalion, 156th Armored Regiment) equipped with 44 Abrams Main Battle Tanks, and a self-propelled artillery battalion (1st Battalion, 141st Artillery Regiment) that was equipped with (18) 155 mm howitzers. This was known as an HBCT (heavy brigade combat team). As of 1 September 2006, the 256th Brigade has transitioned to a light configuration of two infantry battalions, a battalion of towed artillery, and one cavalry squadron for reconnaissance. This new organization is known as an IBCT (infantry brigade combat team) which will have a little over 3 and a half thousand soldiers when at full strength. The HBCT and IBCT along with the SBCT (Stryker brigade combat team) are to be the three organizations that will make up the future army's ground force maneuver units that will project combat power on land.

The new organization of the 256th IBCT will be easier to transport via fixed and rotary winged aircraft as there is no piece of equipment that approaches the 68-ton weight of an Abrams tank or the 26.5-ton weight of a Bradley Fighting Vehicle. This will also make the unit cheaper to equip and maintain as the Abrams at $6 million a piece is one of the most expensive land vehicles in the US Army. 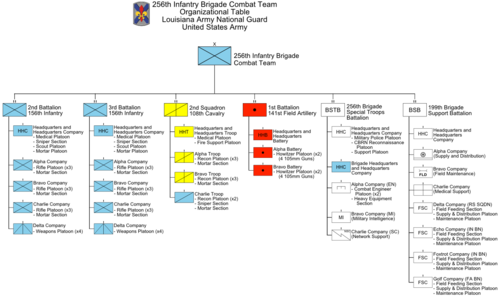 The 2nd Battalion, 156th Infantry is headquartered in Abbeville, Louisiana in Vermilion Parish. It consists of the following:

The 3rd Battalion, 156th Infantry is headquartered in Lake Charles, Louisiana. It consists of the following:

The 2nd Squadron, 108th Cavalry is headquartered in Shreveport, Louisiana. 2nd Squadron provides the 256th IBCT with both mounted and dismounted reconnaissance assets. It consists of the following:

The headquarters of the Special Troops Battalion (STB),[8] reflagged and reorganized from the 1088th Engineer Battalion (Combat), is located in Plaquemine, Louisiana in Iberville Parish. The STB provides the brigade with its combat engineer, military intelligence, signal support, and military police. The STB also provides command, control, and support to the Brigade Headquarters and Headquarters Company.

The 199th Brigade Support Battalion (BSB) provides the 256th IBCT with most of its logistical, maintenance, and transport support, is headquartered at Alexandria, Louisiana in Rapides Parish.