The 26th Infantry Division was an infantry division of the United States Army. A major formation of the Massachusetts Army National Guard, it was based in Boston, Massachusetts for most of its history. Today, the division's heritage is carried on by the 26th Maneuver Enhancement Brigade.

Formed on 18 July 1917 and activated 22 August 1917 at Camp Edwards, MA, consisting of units from the New England area, the division's commander selected the nickname "Yankee Division" to highlight the division's geographic makeup. Sent to Europe in World War I as part of the American Expeditionary Force, the division saw extensive combat in France. Sent to Europe once again for World War II, the division again fought through France, advancing into Germany and liberating the Gusen concentration camp before the end of the war.

Following the end of World War II, the division remained as an active command in the National Guard, gradually expanding its command to contain units from other divisions which had been consolidated. However, the division was never called up to support any major contengencies or see major combat, and was eventually deactivated in 1993, reorganized as a brigade under the 29th Infantry Division.

The 26th Infantry Division was first constituted on 18 July 1917 as the 26th Division. It was formally activated on 22 August of that year in Boston, Massachusetts.[1] The division commanded two brigades comprising national guard units from Massachusetts, Connecticut, Rhode Island, New Hampshire, Vermont, and Maine. The 51st Infantry Brigade contained the 101st Infantry Regiment and the 102nd Infantry Regiment, while the 52nd Infantry Brigade contained the 103rd Infantry Regiment and the 104th Infantry Regiment.[2] Shortly thereafter, division commander Major General C. R. Edwards called a press conference to determine a nickname for the newly formed division. Edwards decided to settle on the suggestion of "Yankee Division" since all of the subordinate units of the division were from New England.[3] Shortly thereafter, the division approved a shoulder sleeve insignia with a "YD" monogram to reflect this.[4]

On 21 September 1917, the division arrived at Saint-Nazaire, France.[5] It was the second division of the American Expeditionary Forces to arrive into the theater at the time, and the first division wholly organized in the United States, joining the 1st Infantry Division. Two additional divisions completed the first wave of American troop deployment, with the 2nd Division formed in France and the 42nd Division arriving at St. Nazaire on 29 October.[6] The division immediately moved to Neufchâteau for training, as most of the division's soldiers were raw recruits, new to military service.[6] Because of this, much of the division's force was trained by the experienced French forces.[7] It trained extensively with the other three US divisions, organized as the U.S. I Corps in January 1918,[6] before being moved into a quiet sector of the trenches in February.[8]

The 26th Infantry Division remained in a relatively quiet region of the lines along the Chemin des Dames for several months before it relieved the 1st Division near St. Mihiel on 3 April. The line here taken over extended from the vicinity of Apremont, on the west, in front of Xivray-Marvoisin, Seicheprey, and Bois de Remieres, as far as the Bois de Jury, on the right, where the French line joined the American line. Division Headquarters were at Boucq.

The stay of the Division in this sector was marked by several serious encounters with the enemy, where considerable forces were engaged. There were furthermore almost nightly encounters between patrols or ambush parties, and the harassing fire of the artillery on both sides was very active.

On 10, 12 and 13 April, the lines held by the 104th Infantry in Bois Brule (near Apremont), and by the French to the left, were heavily attacked by the Germans. At first the enemy secured a foothold in some advanced trenches which were not strongly held, but sturdy counterattacks succeeded in driving the enemy out with serious losses, and the line was entirely re-established.

In late April, German infantry conducted a raid on positions of the 26th Division, one of the first attacks on Americans during the war. At 0400 on 20 April, German field artillery bombarded the 102nd Infantry's positions near Seicheprey before German stoßtruppen moved against the village. The artillery box barrage, continuing 36 hours, isolated American units. The Germans overwhelmed a machine gun company and two infantry companies of the 102nd and temporarily breached the trenches before elements of the division rallied and recaptured the village. The Germans withdrew before the division could counterattack but inflicted 634 casualties, including 80 killed, 424 wounded, and 130 captured, while losing over 600 men, including 150 killed of their own.[9] Similar raids struck the 101st infantry at Flirey on 27 May, and the 103rd Infantry at Xivray-et-Marvoisin on 16 June, but were repulsed. The 26th Division was relieved by the 82nd Division on 28 June, moved by train to Meaux, and entered the line again northwest of Chateau Thierry, relieving the U.S. 2nd Division on 5 July.

As the size of the American Expeditionary Force grew, the division was placed under command of I U.S. Corps in July.[10] When the Aisne-Marne campaign began shortly thereafter, the division, under I U.S. Corps was placed under command of the French Sixth Army protecting its east flank. When the offensive began, the division advanced up the spine of the Marne salient for several weeks, pushing through Belleau Wood, moving 10 miles from 18 to 25 July. On 12 August it was pulled from the lines near Toul to prepare for the next offensive.[11] The division was then a part of the offensive at St. Mihiel, during the Battle of Saint-Mihiel. The division then moved in position for the last major offensive of the war, at Meuse-Argonne. This campaign was the last of the war, as an armistice was signed shortly thereafter.[12] During World War I the division spent 210 days in combat, and suffered 1,587 killed in action and 12,077 wounded in action.[5] The division returned to the United States and was demobilized on 3 May 1919 at Camp Devens, Massachusetts.[1] 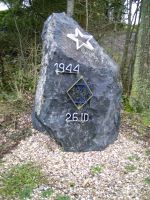 A memorial of the division in Moyenvic, France

The division was assigned to III Corps of the Ninth United States Army, Twelfth United States Army Group.[15] It was shipped from the United States directly to France, and was never sent to Britain.[16] The 26th Infantry Division landed in France at Cherbourg and Utah Beach on 7 September 1944, but did not enter combat as a division until a month later. Elements were on patrol duty along the coast from Carteret to Siouville from 13 to 30 September.[17] The 328th Infantry saw action with the 80th Infantry Division from 5 to 15 October.[18] The division was then reassigned to XII Corps of the Third United States Army.[15] On 7 October, the 26th relieved the 4th Armored Division in the Salonnes-Moncourt-Canal du Rhine au Marne sector, and maintained defensive positions. The division launched a limited objective attack on 22 October, in the Moncourt woods. On 8 November, the division went on the offensive, took Dieuze on 20 November, advanced across the Saar River to Saar Union, and captured it on 2 December, after house-to-house fighting. Reaching Maginot fortifications on 5 December, it regrouped, entering Saareguemines on 8 December.[17] Around this time it was reassigned to III Corps.[15]

Rest at Metz was interrupted by the Battle of the Bulge. The division moved north to Luxembourg from 19 to 21 December, to take part in the battle of the Ardennes break-through. It attacked at Rambrouch and Grosbous on 22 December, beat off strong German counterattacks, captured Arsdorf on Christmas Day after heavy fighting, attacked toward the Wiltz River, but was forced to withdraw in the face of determined German resistance. After regrouping on 5–8 January 1945, it attacked again, crossing the Wiltz River on 20 January.[17] The division continued its advance, taking Grumelscheid on 21 January, and crossed the Clerf River on 24 January. The division was reassigned to XX Corps.[15] The division immediately shifted to the east bank of the Saar, and maintained defensive positions in the Saarlautern area from 29 January until 6 March 1945. 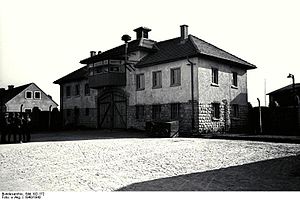 The division's drive to the Rhine River jumped off on 13 March 1945, and carried the division through Merzig from 17 March, to the Rhine by 21 March, and across the Rhine at Oppenheim on 25–26 March.[17] The division was then reassigned to XII Corps.[15] It took part in the house-to-house reduction of Hanau on 28 March, broke out of the Main River bridgehead, drove through Fulda on 1 April, and helped reduce Meiningen on 5 April. Moving southeast into Austria, the division assisted in the capture of Linz, 5 May. It had changed the direction of its advance, and was moving northeast into Czechoslovakia, across the Vlatava River, when the cease-fire order was received.[17] One day later, the division overran the Gusen concentration camp in conjunction with the 11th Armored Division, liberating it from German forces. There, it discovered that the Germans had used forced labor to carve out an elaborate tunnel system with underground aircraft production facilities. SS officers at the camp allegedly planned to demolish the tunnels with the prisoners inside, but the movement of the 26th Infantry and 11th Armored divisions prevented this.[19]

During World War II, the 26th Infantry Division spent 199 days in combat. During that time, it suffered 1,678 killed in action, 7,379 wounded in action, 740 missing in action, 159 prisoners of war, and 6,895 non-battle casualties, for a total of 16,851 casualties during the conflict. Soldiers of the division received two Medals of Honor, and won 38 Distinguished Service Crosses, seven Legions of Merit, 927 Silver Starss, 42 Soldier's Medals, 5,331 Bronze Star Medals, and 98 Air Medals.[20] The division returned to the United States and inactivated at Camp Myles Standish, Massachusetts on 21 December 1945.[1]

On 1 April 1988, the division was relocated to Camp Edwards, Massachusetts.[1] The division headquarters was consolidated with 1st Brigade, 26th Infantry Division.[23] In its place, the 86th Infantry Brigade was assigned to the division as a round-out unit.[22]

File:YDCoinReverse.jpg
Back of the Yankee Division We're Back challenge coin

The beltway around the city of Boston, Massachusetts Route 128, is nicknamed the "Yankee Division Highway" in honor of the 26th Infantry Division.[26] For its contribution in liberating the Gusen concentration camp, the United States Holocaust Memorial Museum continually flies the division's colors at its entrance and for high-profile memorial ceremonies, honoring it as one of 35 US divisions to have assisted in the liberation of German concentration camps.[27]