The 27th Fighter Squadron (27 FS) is a unit of the United States Air Force 1st Operations Group located at Joint Base Langley–Eustis, Virginia. The 27th is equipped with the F-22 Raptor.[1]

The 27th Fighter Squadron is the oldest active fighter squadron in the United States Air Force, with over 95 years of service to the nation. It was organized as the 21st (later 27th) Aero Squadron on 15 June 1917 at Kelly Field, Texas. The squadron deployed to France and fought on the Western Front during World War I as a pursuit squadron. It took part in the Champagne-Marne defensive; Aisne-Marne offensive; St. Mihiel offensive, and Meuse-Argonne offensive.[2]

During World War II the unit served in the Mediterranean Theater of Operations (MTO) as part of Twelfth Air Force as a P-38 Lightning fighter squadron, participating in the North African and Italian campaigns. During the Cold War it was both an Air Defense Command fighter-interceptor squadron as later as part of Tactical Air Command. It was the first USAF operational squadron equipped with the F-15A Eagle in January 1976.[3][4]

Known as the "Fightin' Eagles" or "Black Falcons", the squadron is equipped with the F-22 Raptor, having transitioned from the F-15 in 2005 to become the world's first operational F-22 squadron.

As one of two fighter squadrons of the 1st Fighter Wing, the 27th is tasked to provide air superiority for United States or allied forces by engaging and destroying enemy forces, equipment, defenses or installations for global deployment. 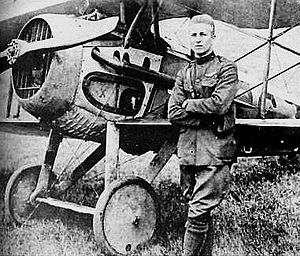 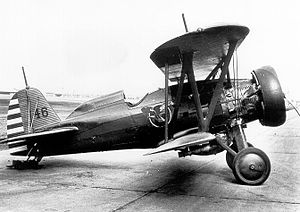 Lieutenant Frank Luke, Jr., known as the "Arizona Balloon Buster," for his daring feats against German observation balloons, was the squadron's most colorful ace. His 18 victories cost him his life, and he was awarded the Medal of Honor. Aircraft flown by the 27th during World War I include the Nieuport 28, Spad XIII and Sopwith F-1 Camel.

In the period between the world wars, the 27th Pursuit Squadron, re-designated 25 January 1923, was stationed primarily at Selfridge Field, Michigan, with the 1st Fighter Group. 27th Pursuit Squadron pilots participated in air races. In 1922, Lt. Donald Stace of the 27th AS won the first Mitchell Trophy Race.

Under extreme and austere conditions in the 1920s they tested the effects of cold weather on their aircraft. At times it was so cold, the engines of their P-1 Hawk aircraft would not start until steam was forced into the engines to thaw them.

While they were stationed at Selfridge Field, Mich., pilots from the 27th AS put on aerial demonstrations all over the country throughout the 1920s. One of those was at Langley Field in March, 1925. A large silhouette of a battleship on the grass landing strip served as a target, which was successfully strafed and bombed for several duly impressed congressmen.

The 1930s saw more training, additional cold weather tests and more modern aircraft. They participated in several air shows throughout the country, and even though they were in the military, the 27th Pursuit Squadron delivered the mail for a while. One of the pilots in this failed experiment went onto lead Strategic Air Command, then Lt. Curtis E. LeMay.

At the beginning of the United States' involvement in World War II, the 27th Fighter Squadron, redesignated 15 May 1942, briefly served in anti-submarine duty at San Diego Naval Air Station and in air defense duty at Reykjavík, Iceland. From October 1942 until May 1945, the 27th participated in the European and Mediterranean theaters of operation, flying Lockheed P-38 Lightnings. The squadron won three Distinguished Unit Citations in Italy 25 August 1943, and 30 August 1943; and at Ploesti, Romania, 18 May 1944. The 27th Fighter Squadron was the top-scoring unit of the 1st Fighter Group in World War II, with 83 of its pilots credited with 176.5 victories.

Following World War II, the 27th was stationed at March Field, California, flying P-80 Shooting Stars, the United States' first operational jet aircraft. Upon the unit's redesignation as the 27th Fighter Interceptor Squadron, it moved to Niagara Falls Air Force Station, New York, flying the F-86, F-89 and F-94C aircraft while stationed at Griffis Air Force Base in Rome N.Y. until receiving the F-102 Delta Dagger in 1957. In October 1959, the 27th was transferred to Loring Air Force Base, Maine, where it assumed an air defense role flying F-106 Delta Darts in the Bangor Air Defense Sector.

On 22 October 1962, before President John F. Kennedy told Americans that missiles were in place in Cuba, the squadron dispersed one third of its force, equipped with nuclear tipped missiles to Olmsted Air Force Base at the start of the Cuban Missile Crisis.[5][6] These planes returned to Loring after the crisis.

In 2003, the 27th Fighter Squadron was announced as the first operational squadron to fly the Raptor—a continuation of the squadron's historical legacy. The first F-22A arrived in late 2004 the squadron continues to grow as more Raptors arrive each month. The 27th Fighter Squadron today stands as a cohesive combat experienced team ready for any call to support the United States' security requirements.

Air Combat Command officials announced a stand down and reallocation of flying hours for the rest of the fiscal year 2013 due to mandatory budget cuts. The across-the board spending cuts, called sequestration, took effect 1 March when Congress failed to agree on a deficit-reduction plan.[7]

Squadrons either stood down on a rotating basis or kept combat ready or at a reduced readiness level called "basic mission capable" for part or all of the remaining months in fiscal 2013.[7] This affected the 27th Fighter Squadron with a reduction of its flying hours, placing it into a basic mission capable status from 5 April-30 September 2013.[7]

World War I and interwar years