The 289th Engineer Combat Battalion (United States) was a combat engineer battalion of the United States Army during World War II. It served under XXI Corps of the Seventh Army in action mainly in France and Germany in 1944 and 1945.

Following these the 289th moved east towards Wurzburg to support the assault of that city. In the latter stages of the War it campaigned south and southeast through communities straddling the states of Baden-Württemberg and Bavaria. Company B continued on assisting rapidly moving armor in the Seventh Army's race to head off German entrenchment in a feared National Redoubt and seal off Alpine passes to Nazi escape.

By early May forward elements of the battalion were spread as far afield as Austria and northern Italy. VE-Day found the Headquarters & Supply company and remaining components of the 289th in Goppingen near Stuttgart

The 289th served occupation duty in three locations in southwest Germany before beginning its return trip stateside via Antwerp, Belgium in August 1945. 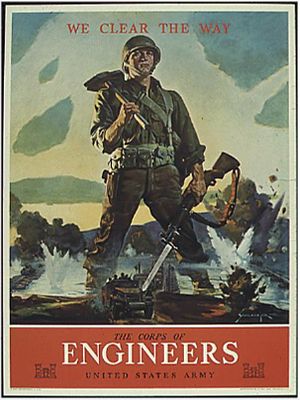 The 289th Engineer Combat Battalion was constituted at Camp Joseph T. Robinson, Little Rock, Arkansas, in December 1942.[2] A cadre from the 299th Engineer Combat Battalion was detached to Camp Robinson to form its core,[3] establishing Companies A, B, C, and HQ and Service.[1] After training,[4] the 289th left New York Port of Embarkation[5] for the European Theater of Operations (ETO) on 22 October 1944. Upon arrival at Bristol on 1 November, it debarked for training in Weston-super-Mare. On 28 December it departed Southampton[6] for Le Havre, landing 31 December.

In the ETO the 289th was attached directly to the XXI Corps of the Seventh Army, U.S. Sixth Army Group. Upon arrival in France it traveled by rail in 40&8s to Epinal, stopping in Forges-les-Eaux and Lunéville before arriving at Fort de la Mouche. After two weeks frigid encampment there it was again on the move, settling at St. Avold near the German city of Saarbrücken on 1 February after two intermediate stops. There it refined its training and acquired combat engineering materials in preparation for joining in Operation Undertone, the Allied invasion of the Saarland set to commence on 15 March.

As a combat service support unit operating directly at Corps level, the 289th was deployed as needed, with companies and platoons often temporarily attached to other field commands. Its first significant contribution was supporting the crossing of the Saar March 17–20; followed by support over the Rhine near Mannheim March 30; and ferry and pontoon bridge construction assistance over the Neckar near Heidelberg March 31.[7] From there it moved successively eastward closer to Wurzburg through 18 April.

The 289th then pivoted south through heavily contested Crailsheim in several short encampments over the next three weeks, facing diminishing German resistance in areas then falling well behind rapidly advancing front lines. In late April Company B was tasked to support the fast-moving 12th Armored Division[8] in its drive deep into Bavaria to prevent the establishment of a German National Redoubt. With engineers building bridges as fast as the Wehrmacht and Waffen SS could blow them, the 12th roared toward the finish in the Seventh Army's race to the Alps to seal off the Brenner Pass to Nazi escape;[9] a prize nabbed at the wire by the rival 103rd Infantry Division on May 4. VE Day was celebrated four days later with H&S company stationed in Goppingen, 20 miles southeast of Stuttgart, and forward elements of the 289th having sprawled as far afield as Austria[10] and northern Italy before war's end.[8]

Occupation duty included being rushed to secure the Kaufbeuren Air Base in southern Bavaria when it was revealed as the final location of the Nazi Party's top secret FA signals intelligence and cryptanalytic agency.[11] Perceived crucial by TICOM, the U.S. intelligence and technology gathering organization, its top secret records forced the 289th into the unusual role of military police. Next was a brief move to secure Neckarsulm, home of NSU Motorenwerke's SdKfz 2 production,[12] followed by an extended stay in Mosbach, site of an underground Daimler-Benz airplane engine factory codenamed "Goldfisch".[13]

Remaining there into August 1945, the 289th was transferred via train through the Netherlands to Belgium to ship out for deployment to the Pacific Theater in preparation for the invasion of Japan. It departed Antwerp 14 August 1945,[14] and was abreast of the White Cliffs of Dover in the English Channel when the announcement of the Japanese surrender on VJ Day, 15 August, was broadcast to all aboard. The transport was then re-routed to the United States, and arrived at Boston POE on 28 August.[15] Members of the unit were processed through Camp Myles Standish and detached to bases nearest their homes to be demobilized.

The unit itself remained active, serving as a shell for repatriating troops as part of Operation Magic Carpet at least into January 1946.[16] 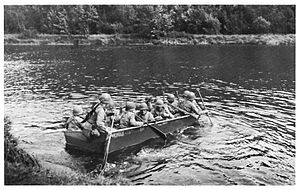 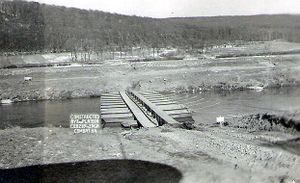 As a combat engineer battalion the 289th was capable of providing a wide variety of combat support services essential to sustaining operating forces in the theater of war.[17] These spanned such diverse activities as construction, demolition, sanitation, map production, minefield clearing, and unit intelligence.

The range of services provided included but was not limited to:[19]

Among those carried out in action by the 289th were the clearing of minefields, removal of demolition charges, and disarming of anti-personnel munitions and booby traps; deployment and operation of assault boats;[20] and the construction of various pontoon bridges,[21] including M1 treadways,[22] and modular steel truss Bailey bridges.[22] 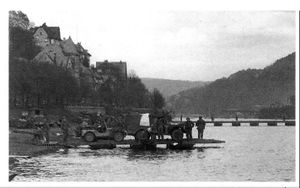 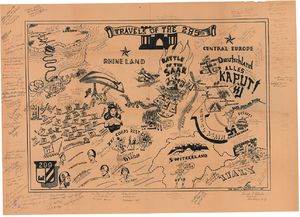 Travels of the 289th by Technician Five John T. Bartolomeo, distributed to members of the Battalion commemorating the end of World War II

The 289th traveled as a unit from the U.S. to St. Avold, France. Once in the combat zone assignments frequently separated its companies or broke them into smaller outfits, often in support of other units. The travel and encampment dates below reflect the location of the battalion's Headquarters & Supply Company as established in the "Travels of the 289th":