From Infogalactic: the planetary knowledge core
(Redirected from 2S19)
Jump to: navigation, search 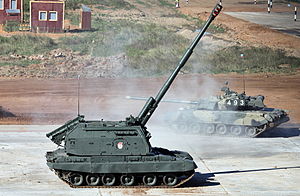 The 2S19 "Msta-S" (Russian: Мста, after the Msta River) is a self-propelled 152 mm howitzer designed by Russia/Soviet Union, which entered service in 1989 as the successor to the SO-152. The vehicle is based on the T-80 tank hull, but is powered by the T-72's diesel engine.

The Msta is a modern howitzer designed for deployment either as an unarmored towed gun, or to be fitted in armored self-propelled artillery mountings. Current production of the towed model is designated Msta-B, while the self-propelled model is the Msta-S (also known by the GRAU index 2S19).

Development of the 2S19 started in 1980 under the project name Ferma. The prototype was known as Ob'yekt 317. The 2S19's standard equipment consists of a semi-automatic laying system 1P22, an automatic loader, an NBC protection system, passive night vision device for the driver, a wading kit, a dozer blade, a smoke generator and 81mm smoke launchers, 1V116 intercom system and a 16 kW generator AP-18D. In 2008 the Russian armed forces ordered an improved model with an automated fire control system.

The 2A64 ordnance of the 2S19 can fire the following types of ammunition, among others: HE (24.7 km), HEAT-FS, HE-BB (28.9 km), HERA (36 km), smoke, chemical, tactical nuclear, illumination and cargo (ICM).[original research?] The laser-guided round “Krasnopol” (of the 9K25 system) can also be launched, as well as the shorter "Krasnopol-M” which fits into the automatic loader.

Msta-S howitzers were used by Russian Army to deliver artillery strikes against Chechen separatists during the Second Chechen War.[1]

Msta-S howitzers have also been used in the War in Donbass by the Ukrainian Army as well as pro-Russian rebels who captured one machine during the conflict.[2]