SO-152 (СО-152) is a Soviet 152.4 mm self-propelled artillery developed in 1968. It was a response to the American 155 mm M109. The development started in 1967 according to the Resolution of the Council of Ministers of the Soviet Union from July 4, 1967. In 1968 the SO-152 was completed and in 1971 entered service. Its GRAU designation is 2S3 (2С3). The fighting vehicle also received the additional designation Akatsiya (Акация), which is Russian for acacia.

Designated M1973 by the U.S. Army, the Akatsiya is armed with a 152.4 mm howitzer based on the Soviet 152.4 mm D-20 howitzer and is sometimes confused with the M109 self-propelled artillery. The artillery system was developed at the design bureau No. 9 of Sverdlovsk. The factory designation of the howitzer is D-22 and the GRAU designation, 2A33. The chassis was developed by Uraltransmash.

Driver's and engine-transmission compartments are located in a front part of a hull, fighting compartment with rotatory turret – in middle and rear parts of the hull. The armour is welded rolled steel. Howitzer is equipped with R-123 radio set, R-124 intercom, automatic CBRN defense system with filtration unit and fire-fighting equipment. The V-59 12-cylinder four-stroke water-cooled diesel engine connects with a mechanical twin gear transmission, a gear box is in one block with a planetary steering gear. The 2S3 has self-entrenching equipment which allows to prepare a trench within 20–40 min.

The crew consists of 4–6 men: a driver, a gunner, a loader, a commander, and two ammunition bearers, which are positioned to the rear of the vehicle feeding rounds through two hatches in the hull rear when in masked firing position. 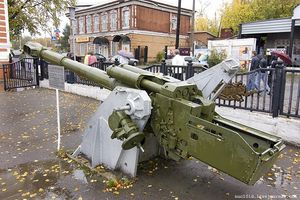 The 152.4 mm L/27 howitzer D-22 (2A33) can be elevated from −4° to +60° with a turret traverse of a full 360°. Rate of fire is 2.6 – 3.5 rounds/min depending on firing conditions. The howitzer is equipped with a double-baffle muzzle brake, a semi-automatic vertical wedge breechblock and an ejector. The 2S3 has a periscopic sight for laying the howitzer, and telescopic sight for engaging targets with direct fire. The howitzer has separate type of loading with ammunition (35 rounds, later increased to up to 46) arranged in two mechanized stowages (in the turret and in the rear of the hull). The Akatsiya can fire OF-540 and OF-25 HE-Frag 43.56 kg projectiles (also all types of rounds developed for 152.4 mm towed howitzer-guns ML-20 and D-20, and for towed howitzer D-1) at a maximum range of 18.5 km depending of used charge or rocket assisted projectiles to a maximum of 24 km. Other projectiles available to the Akatsiya include BP-540 HEAT-FS (sight distance is 3 km, 250 mm armor penetration), Br-540B and Br-540 AP-T (115–120 mm armor penetration at a 1000 m), OF-38 Krasnopol laser-guided rocket-assisted projectiles, S1 illuminating, ZH3 smoke, nuclear projectiles (with explosive capacity of 2 kt). Secondary armament consists of a remotely controlled 7.62 mm PKT tank machine gun on commander's cupola for anti-aircraft defence and self-defence at close range.

The Akatsiya chassis is based on that of the Object 123 tracked chassis[4] of the 2K11 Krug surface-to-air missile system; it includes six (rather than seven as in the 2K11 Krug) twin rubber-tired road wheels, four rubber-tired return rollers (two single and two twin), front drive sprocket with detachable sprocket rings (lantern-wheel gear) and idler wheel per side. The track is 14.375 m long, 482 mm wide and has 115 links. The Akatsiya can cross 0.7 m high vertical obstacles, 3.0 m wide trenches, 1.05 m fording depth and climb 30° gradients.[2][5] It can be transported by transport plane An-22 (carries two self-propelled howitzers of this type).

Two Object 303 prototypes were built in the end of 1968. Factory tests finished in October 1969, and discovered strong gas contamination of the fighting compartment during intensive gunnery, especially during the use of small charges. As a result, army inspectors did not accept four SO-152s built in summer 1969 for ground tests. The problem of gas contamination was solved, allowing the SO-152 to enter service of the Soviet Army in 1971. The first three serial 2S3s were built by Uraltransmash in the end of 1970, and in 1971 nine were produced. The works received an order for 70 2S3 in 1973. The mass production finished in 1993. 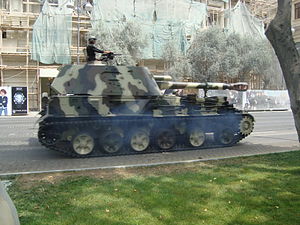 The 2S3 was intended for inventory of artillery regiments of Soviet tank and motor rifle divisions. At first only one gun battery of each artillery regiment was equipped with the Akatsiya (18 self-propelled howitzers).

By the end of 1980s however self-propelled artillery regiments of Soviet first echelon tank and motor rifle divisions (e.g. those belonging to the Group of Soviet Forces in Germany) each had 36 or 54 self-propelled howitzers of this type (2 or 3 gun battalions). So for example the following artillery regiments all had 54 Akatsiya on their strength:

While the regiments below only had 36 Akatsiya:

And the 286th Guards Red Banner Prague howitzer artillery brigade stationed in Potsdam was equipped with no less than 72 Akatsiya.[6]

As of now the Akatsiya are used by the following units of the Russian Navy or are stationed in following bases (incomplete list):

All the equipment[8] of 817th self-propelled artillery regiment of 62nd Russian military base of the North Caucasus Military District was withdrawn from Akhalkalaki, Georgia in 2006 according to the Russian-Georgian Sochi agreement, the regiment had 30 Akatsiya and it had planned to relocate some of its self-propelled artillery to 102nd Russian military base in Gyumri, Armenia.

At the moment the 2S3 is considered outdated due to an insufficient range compared to modern self-propelled artillery. A modernized variant was developed in 2000s and 2 gun battalions of the Russian Army (including one of the 2nd Taman motor rifle division) have been reequipped with the 2S3M2 in 2006.[9]

The 2S3 became a well-known self-propelled artillery after combat operations in Afghanistan where it proved to be an effective and reliable artillery system. 2S3s were used quite successfully during two Chechen wars and military conflicts on the territory of former USSR.

2S3 Akatsiya SPGs were exported to foreign countries but in a relatively small amount. 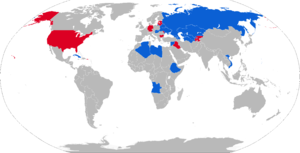