The Division fought at Smolensk and during the Kerch-Eltigen Operation during the Second World War.

The division has played a prominent role in two of the major political crises of recent Soviet and Russian history. In 1991, it was one of the divisions deployed in Moscow as part of the hardline coup attempt against the Soviet President Mikhail Gorbachev; however, it was a tank unit attached to the division that switched sides at the decisive point in the coup's course. Boris Yeltsin delivered a speech standing on top of tank no. 110, strengthening his own position significantly, both domestically and abroad. A member of the Tamanskaya division, 1992

Two years later, the division once again came to Yeltsin's rescue, during the 1993 Russian constitutional crisis. The stand-off between the Russian Parliament and Yeltsin, against the backdrop of massive public demonstrations in Moscow against Yeltsin's government, had by the 2 October brought Russia to the brink of civil war. Between 2 and 4 October, the army considered its position. By sunrise of the 4th, they had given their support to Yeltsin. That day, tanks from the Tamanskaya Division opened fire on the Parliament building, where the Parliament's supporters were barricaded. This episode consolidated Yeltsin's power; it was the deadliest street fighting in Moscow since 1917.

Since then, the division has seen service in Chechnya: it is known to have contributed to the force that brought the republic back under Russian control in 1999 and 2000, during the Second Chechen War. A 'tactical group' from the 15th Guards Motor Rifle Regiment deployed to Chechnya in early 2000, serving in the south of the republic and the Argun Gorge after the end of major combat operations to maintain security. In 2004, it was visited by a delegation of foreign military attaches. The Kalininets base has also recently provided the venue for the Miss Russian Army contest.

The division was deployed in the Moscow Military District, based near Aprelevka,[2] in the Moscow suburbs: its various subunits occupied a vast complex of buildings and sites to the north and northwest of the town. The two most important 'sub-bases' in the area are Kalininets and Kobyakovo.[3] It was one of the Russian Army's 'constant readiness' divisions, meaning that it was required to have at least 80% manpower and 100% equipment strength at all times; it was thus intended to be readily deployable. 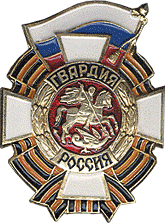 On the 22 January 2007, the Russian news agency Interfax reported comments from the commander of the Moscow Military District, Col. General Vladimir Bakin. He stated that the Tamanskaya Division's 1st Guards Motor Rifle Regiment had been re-equipped with a battalion of T-90 main battle tanks, replacing its old T-80s, a battalion of BTR-80 armoured personnel carriers (this presumably refers to the modernised BTR-80A variant, which has improved firepower and armour, among other things), as well as a battalion of new self-propelled howitzers and 'C2' command and control systems. Bakin also said that the regiment's 3rd Battalion had begun re-equipping with the BMP-3 infantry fighting vehicle, of which the regiment as a whole was due to receive 129 by the end of the year.

Furthermore, according to Interfax: "Bakin stated that the First Guards Regiment had already undergone training for operating new materiel. "The regiment was the first in the Russian army to successfully master new arms and materiel. Last year, the regimental personnel were graded highly on their performance, he said."[4]

This rearmament may represent the first publicly known deployment of the T-90 in the Russian Army outside of the 5th Guards 'Don' Tank Division, based at Kyakhta in the Siberian Military District, which has been entirely equipped with such tanks in recent years. There have been rumours in circulation for some time now that all the T-90s currently in service were to be accumulated in the Tamanskaya Division, but these rumours lack reliable sources. If any such move is to occur, it may take place in 2007, but January's partial rearmament of the division does not seem to signal the beginning of such a move, since the T-90s and other modern armoured vehicles now with the division are newly purchased ones.

The division has been slated for disbandment in 2009, with two brigades being created from its existing subunits.[5] Each brigade will include about 7,500 personnel with one mounted on BMP-3 tracked vehicles while the other using BTR-80 and BTR-90 wheeled vehicles. The two brigades, according to Warfare.ru, are the 5th Separate Motor Rifle Brigade in the Moscow Military District, and the 8th Separate Mountain Motor Rifle Brigade in Chechniya.

The division was disbanded in mid-2009, being split into two new motor rifle brigades. After 2009, the main successor of the division was the 5th Guards Separate, Order of the October Revolution, Red Banner, Order of Suvorov Brigade named after Kalinin.

The Division was re-formed in 2013 by order of Russian defense minister Sergei Shoigu,[6] and will consist of the 5th Separate Motor-Rifle Brigade, the 4th Independent Tank Brigade and other unnamed units.[7] This order is pursuant to Russian President Vladimir Putin's intention to "strengthen the historical continuity" of the Russian Armed Forces by resurrecting the names of "famous, legendary units and formations of the Russian and Soviet armies".[7][8] Another division, the 4th Guards Kantemirovskaya Tank Division was also reinstated under the same order.

As of June 2015, the Russian Armed Forces are planning to rebuild the famous Soviet era 1st Guard’s Red Banner Tank Army by including the 2nd Guards Motor Rifle Division, 4th Guards Tank Division, as well as one tank and rifle brigade.[9] The decree providing for the reformation of the force was enacted in the winter of 2014, and its now a part of the Western Military District. Unlike the original 1st GTA, the 2nd Guards Division forms a part of the revived army, based in Moscow Oblast.

As of 2004, the Tamanskaya Division consisted of the following units:

Overall, the division numbered around 12,000 soldiers.[10] Its principal vehicles were the T-90 and T-80 main battle tanks, BTR-80 armoured personnel carrier and the BMP-2 and BMP-3 infantry fighting vehicles.