The 2nd Panzer Division (English: 2nd Tank Division) was an armoured division in the German Army, the Wehrmacht, during World War II.

Created as one of the original three German tank divisions in 1935, it was stationed in Austria after the Anschluss and then participated in the campaigns in Poland (1939) and France (1940)[1] before it returned to Poland for occupation duties (1940–1941). It took part in the Balkans campaign (1941) and then transferred to the Eastern Front in September 1941.

The division fought with Army Group Centre in the battles of Moscow (1941) and Kursk (1943). After heavy losses on the Eastern Front it was sent to France for rehabilitation (1944). It fought in Normandy and was almost completely destroyed in the Falaise Pocket (1944). It was rebuilt once more and fought in the Battle of the Bulge (1944) and in the defence of the Rhine (1945), surrendering to US forces at war's end.

The 2nd Panzer Division was formed on 15 October 1935 and was headquartered in Würzburg, Bavaria. It was one of three tank divisions created at the time, the other two having been the 1st and 3rd Panzer Division.[2] Germany had renounced the Treaty of Versailles earlier in the year which had forbidden the country, among other things, from having tank forces, a treaty Germany had violated almost from the start by secretly developing tanks and operating a covert tank school in the Soviet Union.[3]

Under the command of Heinz Guderian the division participated in the Anschluss of Austria in 1938, covering 680 kilometres (420 mi) in 48 hours but in the process losing 30 percent of its tanks to accidents and mechanical failures. It formed part of the garrison in Vienna, Austria's capital with most of its personnel now recruited from former Austria.[4]

The deployment and planned advances for the invasion of Poland with 2nd Panzer Division moving towards the northeast from Slovakia, to take Kraków and continue to Warsaw through the Vistula valley.

In early September 1939, the 2nd Panzer Division took part in the invasion of Poland, crossing the Polish-Slowak border and advancing towards Kraków. The division suffered heavy losses while fighting in central Poland.[4][5] 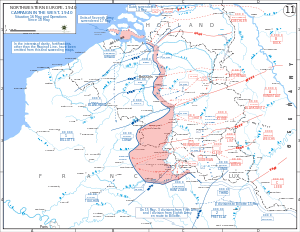 German armoured advance (including 2nd Panzer Division) through the Ardennes between 10 and 16 May 1940, as part of the Battle of France

In May 1940, the unit took part in the Battle of France as a part of the XIX Army Corps under the command of Guderian. The division was involved in fighting in Belgium and the Mosel River valley. It arrived in the town of Abbeville on the 20th. Later the division formed the armoured element which flanked the British Expeditionary Army and forced their evacuation from Dunkirk. The 2nd Panzer Division then advanced along the River Aisne into the interior of France. At the end of the campaign in the last months of 1940, the Division lost its 4th Panzer Regiment which was used as the basis for the soon-to-be-formed 13th Panzer Division.[4][5][6]

The division was reassigned to the XVIII Mountain Corps of the 12th Army on 6 April 1941 to play a role in Operation Marita, the invasion of Greece. The German army pushed through the south of Yugoslavia, reaching the Greek border, where they made contact with the 19th Greek Mechanised Division in the area of Lake Dojran. On 9 April the division took the city of Salonika and forced the surrender of the Greek Eastern Macedonia Army Section.[5][6]

At the end of the campaign the 2nd Panzer Division returned to Vienna for refitting, with parts of the division transported by sea and suffering heavy losses because of the sinking of three transport ships.[5][6]

In October 1941, the 2nd Panzer Division was sent to the Eastern Front, reinforcing Army Group Centre in their push towards Moscow, Operation Typhoon. It was attached to the XL Panzer Corps of the 4th Panzer Army during the Battle of Moscow. The division retreated following a counterattack of the Red Army in the winter of 1941, taking part in various battles as a component in the 9th German Army during the first months of 1942. In 1943 the 2nd Panzer Division took part in Operation Citadel, as part of the XLVII Panzer Corps of the 9th German Army of Army Group Centre. Following the operation's failure, the Red Army launched Operation Kutuzov in Army Group's Center's sector. The division retreated, suffering heavy losses, having also lost two of its three tank battalions earlier in 1942 when they were send to the southern sector of the front to assist with the German push towards the Wolga and Caucasus.[6][7]

In late 1943 the 2nd Panzer Division was sent to France for refitting after the heavy losses it suffered on the Eastern Front. The division was equipped with Panther tanks. Following the invasion of Normandy, the division was moved to Normandy in June; it engaged British troops of the 50th Infantry Division and the 7th Armoured Division. It took part with its last 25 tanks in Operation Luttich, a failed German counterattack at Mortain. It was later encircled in the Falaise pocket, but broke out with heavy losses in materiel and troops. The division was reorganised in Germany, absorbing the depleted 352 Infantry Division. Due to the shortage in materiel, the division's complement of tanks was significantly reduced. Some of their companies only had assault guns, although one battalion received Panzer V Panther tanks.[6][8]

The division was sent to the Western Front and attached to XLVII Panzer Corps, 5th Panzer Army which was preparing an offensive in the area of the Ardennes, Belgium. On the eve of commitment, it was about full strength, with 27 Panzer IV, 58 Panthers and 48 assault guns in the division tank parks.[9] During the Battle of the Bulge in December 1944 - January 1945, the 2nd Panzer Division attacked towards the crucial road junction of Bastogne. However, the town's defences were quickly reinforced by the veteran 101st Airborne Division. Attacks against the town failed. When it was diverted to the Meuse on 18 December, in accordance with the original plan, the division was unable to reach the river. American reinforcements to the area threatened its flanks and to cut it off from its supply line. Eventually, the vanguard of the division came to reach within 4 km the Meuse River where on the 24 December they were stopped by the U.S. 2nd Armored Division and the British 3rd Royal Tank Regiment.[10] It was forced to retreat by fierce counterattacks conducted by American forces as well as the lack of petrol for the German mechanised forces.[11]

Battle of the Rhine

Now operating at an extremely reduced effectiveness, in the spring of 1945 the 2nd Panzer Division took part in the Battle of the Rhineland. In this, the Wehrmacht tried to halt the passage of the Allies across the River Rhine, and the Division assisted as a component of the XIII Army Corps, of the 7th German Army, Heeresgruppe B.[8]

The final engagement of the unit was at the city of Fulda in April 1945. The division surrendered in Saxony and north-western Czechoslovakia to the US forces on 7 May 1945.[8]

The commanders of the division:[12]

The organisation of the division:[2]