The 2nd Shock Army (Russian: 2-я Ударная армия) was a field army of the Soviet Union during the Second World War. This type of formation was created in accordance with prewar doctrine that called for Shock Armies to overcome difficult defensive dispositions in order to create a tactical penetration of sufficient breadth and depth to permit the commitment of mobile formations for deeper exploitation.[1] However, as the war went on, Shock Armies lost this specific role and reverted, in general, to ordinary frontline formations.

The 2nd Shock Army was formed from the 26th Army within the Volkhov Front in December 1941 and initially consisted of the 327th Rifle Division and eight separate rifle brigades. During the Lyuban Offensive Operation, the 2nd Shock Army broke through German lines, was cut off from reinforcement along the Volkhov River by a German counter-attack, and was not permitted to retreat. When the order for retreat finally came in, the 2nd was literally destroyed trying to escape. This happened again, during the Siniavino operation in which the 2nd Shock Army had to return to the Front's HQ for resupply and manpower.

By 1944, the 2nd Shock Army consisted of five rifle divisions (11th, 43rd Rifle Division, 90th Rifle Division, 131st, and 196th) along with 600 artillery pieces, a tank brigade, another tank regiment, two SPG regiments, and masses of ammunition and supplies.[2] which was used during the Battle of Narva.

After the end of the war, until January 1946 2nd Shock remained in the northeast of Germany (with HQ at Schwerin), after which in full strength it was returned to the USSR, where its HQ was reorganized as HQ Arkhangel'sk Military District. It comprised 3 rifle corps by this time (9 divisions). After 2nd Shock was re-designated HQ Arkhangelsk MD 116th Rifle Corps and its divisions, 109th Rifle Corps (101st Guards, 46th and 372nd Rifle Division) went to the North Caucasus Military District, and 134th Rifle Corps (102nd Guards, the 90th and 272nd Rifle Divisions) - in the Voronezh Region.

On January 7, 1942, Vlasov's army had spearheaded the Lyuban Offensive Operation to break the Leningrad encirclement. Planned as a combined operation between the Volkhov and Leningrad Fronts on a 30 km frontage, other armies of the Leningrad Front (including the 54th) were supposed to participate at scheduled intervals in this operation. Crossing the Volkhov River Vlasov's army was successful in breaking through the German 18th Army's lines and penetrated 70–74 km deep inside German rear area.[4] The other armies (Volkhov Front's 4th, 52nd, and 59th Armies, 13th Cavalry Corps, and 4th and 6th Guards Rifle Corps), however, failed to provide the required support, and Vlasov's army became stranded. Permission to retreat was refused. With the counter-offensive in May 1942, the Second Shock Army was finally allowed to retreat, but by now, too weakened, it was virtually annihilated during the final breakout at Myasnoi Bor.[5] Vlasov was taken prisoner by the Wehrmacht troops on July 6, 1942.[6] He later raised a legion of Russians who fought alongside the German forces.

File:RIAN archive 602484 Joining of Leningrad and Volkhov Fronts.jpg
Meeting of the 2nd Shock Army and the 67th Army in January 1943 during Operation Iskra 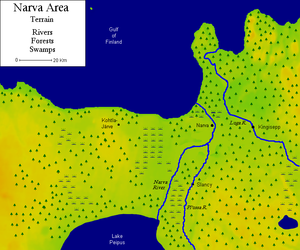 The terrain in which the 2nd Shock Army fought in the 1944 Battle of Narva.

2nd Shock Army again suffered severe losses during the Siniavino operation from 19 August - 20 October 1942.[7] Again, the army was returned to the Front reserves for rebuilding.

In January 1943 it took part in the offensive which aimed to raise the Siege of Leningrad, Operation Iskra. The Stavka then intervened in Leningrad Front offensive planning during September 1943, changing the plan so that 2nd Shock Army would attack from the Oranienbaum bridgehead. The offensive, under a newly appointed commander, General I.I. Fedyuninskii, begun on 14 January, took part in breaking the almost 900-day Siege of Leningrad, and pushed west to the outskirts of Narva, resulting in the Battle of Narva.