The 35th Infantry Division (Santa Fe Division) is an infantry unit in the Army National Guard, and is currently commanded by Major General Michael Navrkal.[1][2] It was reactivated and, Headquarters and Headquarters Company, federally recognized on 25 August 1984 at Fort Leavenworth, Kansas.[3]

The 35th Division was organized 25 August 1917 at Camp Doniphan, Oklahoma as a unit of the National Guard with troops from Missouri and Kansas.[4][5]

The division's shoulder patch, a white Santa Fe cross on a blue disc with a green border, was originally approved for the 35th Division on 29 October 1918.

The Santa Fe cross was a symbol used to mark the Santa Fe Trail, an area where the unit trained, and was designated as an identifying device for the unit by Headquarters, 35th Division General Orders 25, dated March 27, 1918. The organization is referred to as the Santa Fe Division.[6]

Actions during World War I

On 11 May 1918, the 35th Division arrived at Le Havre, France and served first, a brigade at a time, in the Vosges between 30 June and 13 August. The whole division served in the Gerardmer sector, Alsace, 14 August to 1 September; Meuse-Argonne, 21 to 30 September; Sommedieu sector, 15 October, to 6 November. Men of the division were ninety-two days in quiet sectors and five in active; advanced twelve and one half kilometres against resistance, captured 781 prisoners, and lost 1,067 killed and 6,216 wounded.[7] The 35th Division had, as an officer, Captain Harry Truman, 33rd President of the United States.[8]

World War I order of battle

Units of the 35th Division included:

The 35th Infantry Division arrived in England on 25 May 1944 and received further training. It landed on Omaha Beach, Normandy July 5–7, 1944 and entered combat on 11 July, fighting in the Normandy hedgerows, north of St. Lo. The Division beat off twelve German counterattacks at Emelie before entering St. Lo on 18 July. After mopping up in the St. Lo area, it took part in the offensive action southwest of St. Lo, pushing the Germans across the Vire on 2 August, and breaking out of the Cotentin Peninsula. While en route to an assembly area, the Division was "flagged off the road," to secure the Mortain-Avranches corridor and to rescue the 30th Division's "Lost Battalion" August 7–13, 1944.[8]

Then racing across France through Orleans and Sens, the Division attacked across the Moselle on 13 September, captured Nancy on 15 September, secured Chambrey on 1 October, and drove on to the German border, taking Sarreguemines and crossing the Saar on 8 December. After crossing the Blies River on 12 December, the Division moved to Metz for rest and rehabilitation on 19 December. The 35th moved to Arlon, Belgium December 25–26, and took part in the fighting to relieve Bastogne, throwing off the attacks of four German divisions, taking Villers-laBonne-Eau on 10 January, after a 13-day fight and Lutrebois in a 5-day engagement. On 18 January 1945, the Division returned to Metz to resume its interrupted rest.[8]

In late January, the Division was defending the Foret de Domaniale area. Moving to Holland to hold a defensive line along the Roer on 22 February, the Division attacked across the Roer on 23 February, pierced the Siegfried Line, reached the Rhine at Wesel on 10 March, and crossed 25–26 March. It smashed across the Herne Canal and reached the Ruhr River early in April, when it was ordered to move to the Elbe April 12. Making the 295-mile dash in two days, the 35th mopped up in the vicinity of Colbitz and Angern, until 26 April 1945 when it moved to Hanover for occupational and mopping-up duty, continuing occupation beyond VE-day. The Division left Southampton, England on 5 September, and arrived in New York City on 10 September 1945.[8]

Assignments in the ETO

See also: Timeline of events in the Cold War

The 35th Infantry Division Headquarters commanded Task Force Eagle's Multi-National Division North in Bosnia and Herzegovina as part of SFOR-13 (Stabilization Force 13) with the NATO peacekeeping mandate under the Dayton Peace Accords. The headquarters were located at Eagle Base in the town of Tuzla. Brigadier General James Mason was the commander. He later went on to command the division. The division headquarters received the Army Superior Unit Award for its service in Bosnia. Division liaison officers served in the towns of Mostar, Sarajevo, Banja Luka, Zenica and Doboj.

The division provided headquarters control for National Guard units deployed to Louisiana in the aftermath of Hurricane Katrina.[16] while the 38th Infantry Division did the same for Mississippi.

A detachment of the 35th Infantry Division was the headquarters element for Task Force Falcon of Multi-National Task Force East (MNTF-E) for the NATO Kosovo Force 9 (KFOR 9) mission. The 35th provided command and control from 7 November 2007 until 7 July 2008, when they were succeeded by the 110th Maneuver Enhancement Brigade, Missouri Army National Guard.[citation needed] 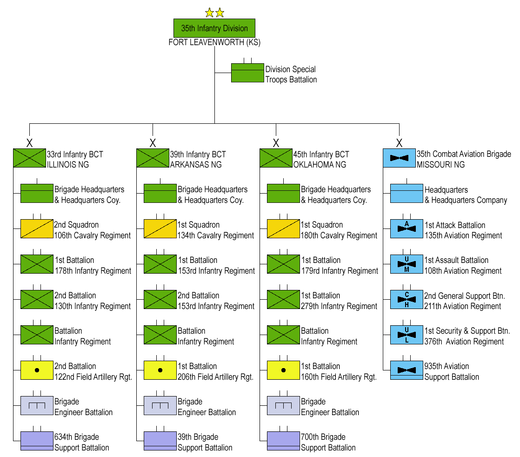 35th Infantry Division exercises training and readiness oversight of the following elements, but they are not organic:[17]