This innovation has the potential to provide petabyte-level mass storage on DVD-sized discs (120mm). Data recording and readback are achieved by focusing lasers within the medium. However, because of the volumetric nature of the data structure, the laser light must travel through other data points before it reaches the point where reading or recording is desired. Therefore, some kind of nonlinearity is required to ensure that these other data points do not interfere with the addressing of the desired point.

No commercial product based on 3D optical data storage has yet arrived on the mass market, although several companies are actively developing the technology and claim that it may become available 'soon'.

Current optical data storage media, such as the CD and DVD store data as a series of reflective marks on an internal surface of a disc. In order to increase storage capacity, it is possible for discs to hold two or even more of these data layers, but their number is severely limited since the addressing laser interacts with every layer that it passes through on the way to and from the addressed layer. These interactions cause noise that limits the technology to approximately 10 layers. 3D optical data storage methods circumvent this issue by using addressing methods where only the specifically addressed voxel (volumetric pixel) interacts substantially with the addressing light. This necessarily involves nonlinear data reading and writing methods, in particular nonlinear optics.

3D optical data storage is related to (and competes with) holographic data storage. Traditional examples of holographic storage do not address in the third dimension, and are therefore not strictly "3D", but more recently 3D holographic storage has been realized by the use of microholograms. Layer-selection multilayer technology (where a multilayer disc has layers that can be individually activated e.g. electrically) is also closely related. 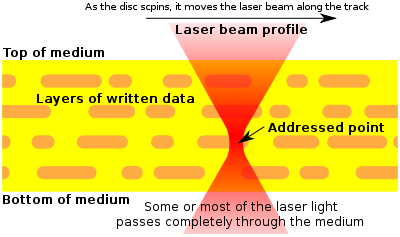 Schematic representation of a cross-section through a 3D optical storage disc (yellow) along a data track (orange marks). Four data layers are seen, with the laser currently addressing the third from the top. The laser passes through the first two layers and only interacts with the third, since here the light is at a high intensity.

As an example, a prototypical 3D optical data storage system may use a disc that looks much like a transparent DVD. The disc contains many layers of information, each at a different depth in the media and each consisting of a DVD-like spiral track. In order to record information on the disc a laser is brought to a focus at a particular depth in the media that corresponds to a particular information layer. When the laser is turned on it causes a photochemical change in the media. As the disc spins and the read/write head moves along a radius, the layer is written just as a DVD-R is written. The depth of the focus may then be changed and another entirely different layer of information written. The distance between layers may be 5 to 100 micrometers, allowing >100 layers of information to be stored on a single disc.

In order to read the data back (in this example), a similar procedure is used except this time instead of causing a photochemical change in the media the laser causes fluorescence. This is achieved e.g. by using a lower laser power or a different laser wavelength. The intensity or wavelength of the fluorescence is different depending on whether the media has been written at that point, and so by measuring the emitted light the data is read.

The size of individual chromophore molecules or photoactive color centers is much smaller than the size of the laser focus (which is determined by the diffraction limit). The light therefore addresses a large number (possibly even 109) of molecules at any one time, so the medium acts as a homogeneous mass rather than a matrix structured by the positions of chromophores.

The origins of the field date back to the 1950s, when Yehuda Hirshberg developed the photochromic spiropyrans and suggested their use in data storage.[3] In the 1970s, Valeri Barachevskii demonstrated[4] that this photochromism could be produced by two-photon excitation, and finally at the end of the 1980s Peter M. Rentzepis showed that this could lead to three-dimensional data storage.[5] This proof-of-concept system stimulated a great deal of research and development, and in the following decades many academic and commercial groups[who?] have worked on 3D optical data storage products and technologies. Most of the developed systems are based to some extent on the original ideas of Rentzepis. A wide range of physical phenomena for data reading and recording have been investigated, large numbers of chemical systems for the medium have been developed and evaluated, and extensive work has been carried out in solving the problems associated with the optical systems required for the reading and recording of data. Currently, several groups remain working on solutions with various levels of development and interest in commercialization (see below).

Data recording in a 3D optical storage medium requires that a change take place in the medium upon excitation. This change is generally a photochemical reaction of some sort, although other possibilities exist. Chemical reactions that have been investigated include photoisomerizations, photodecompositions and photobleaching, and polymerization initiation. Most investigated have been photochromic compounds, which include azobenzenes, spiropyrans, stilbenes, fulgides and diarylethenes. If the photochemical change is reversible, then rewritable data storage may be achieved, at least in principle. Also, multilevel recording, where data is written in "grayscale" rather than as "on" and "off" signals, is technically feasible.

Writing by 2-photon absorption can be achieved by focusing the writing laser on the point where the photochemical writing process is required. The wavelength of the writing laser is chosen such that it is not linearly absorbed by the medium, and therefore it does not interact with the medium except at the focal point. At the focal point 2-photon absorption becomes significant, because it is a nonlinear process dependent on the square of the laser fluence.

Writing by 2-photon absorption can also be achieved by the action of two lasers in coincidence. This method is typically used to achieve the parallel writing of information at once. One laser passes through the media, defining a line or plane. The second laser is then directed at the points on that line or plane that writing is desired. The coincidence of the lasers at these points excited 2-photon absorption, leading to writing photochemistry.

Another approach to improving media sensitivity has been to employ resonant two-photon absorption (also known as "1+1" or "sequential" 2-photon absorbance). Nonresonant two-photon absorption (as is generally used) is weak since in order for excitation to take place, the two exciting photons must arrive at the chromophore at almost exactly the same time. This is because the chromophore is unable to interact with a single photon alone. However, if the chromophore has an energy level corresponding to the (weak) absorption of one photon then this may be used as a stepping stone, allowing more freedom in the arrival time of photons and therefore a much higher sensitivity. However, this approach results in a loss of nonlinearity compared to nonresonant 2-photon absorbance (since each 1-photon absorption step is essentially linear), and therefore risks compromising the 3D resolution of the system.

In microholography, focused beams of light are used to record submicrometre-sized holograms in a photorefractive material, usually by the use of collinear beams. The writing process may use the same kinds of media that are used in other types of holographic data storage, and may use 2-photon processes to form the holograms.

Data may also be created in the manufacturing of the media, as is the case with most optical disc formats for commercial data distribution. In this case, the user can not write to the disc - it is a ROM format. Data may be written by a nonlinear optical method, but in this case the use of very high power lasers is acceptable so media sensitivity becomes less of an issue.

The fabrication of discs containing data molded or printed into their 3D structure has also been demonstrated. For example, a disc containing data in 3D may be constructed by sandwiching together a large number of wafer-thin discs, each of which is molded or printed with a single layer of information. The resulting ROM disc can then be read using a 3D reading method.

Other approaches to writing

Other techniques for writing data in three-dimensions have also been examined, including:

The reading of data from 3D optical memories has been carried out in many different ways. While some of these rely on the nonlinearity of the light-matter interaction to obtain 3D resolution, others use methods that spatially filter the media's linear response. Reading methods include:

The active part of 3D optical storage media is usually an organic polymer either doped or grafted with the photochemically active species. Alternatively, crystalline and sol-gel materials have been used.

Media for 3D optical data storage have been suggested in several form factors:

The simplest method of manufacturing - the molding of a disk in one piece - is a possibility for some systems. A more complex method of media manufacturing is for the media to be constructed layer by layer. This is required if the data is to be physically created during manufacture. However, layer-by-layer construction need not mean the sandwiching of many layers together. Another alternative is to create the medium in a form analogous to a roll of adhesive tape.[11]

A drive designed to read and write to 3D optical data storage media may have a lot in common with CD/DVD drives, particularly if the form factor and data structure of the media is similar to that of CD or DVD. However, there are a number of notable differences that must be taken into account when designing such a drive, including:

Despite the highly attractive nature of 3D optical data storage, the development of commercial products has taken a significant length of time. This results from limited financial backing in the field, as well as technical issues, including:

Much of the development of 3D optical data storage has been carried out in universities. The groups that have provided valuable input include:

In addition to the academic research, several companies have been set up to commercialize 3D optical data storage and some large corporations have also shown an interest in the technology. However, it is not yet clear whether the technology will succeed in the market in the presence of competition from other quarters such as hard drives, flash storage, and holographic storage.