3 Commando Brigade is a commando formation of the British Armed Forces and the main manoeuvre formation of the Royal Marines. Its personnel are predominantly Royal Marines, supported by units of Royal Engineers, Royal Artillery, and the Fleet Air Arm, together with other Commando Qualified sailors, soldiers and airmen.

The 3rd Special Service Brigade was formed in 1943 and sailed for the Far East and saw action against the Japanese in the Burma Campaign.[1] On 6 December 1944, the brigade was renamed 3rd Commando Brigade, removing the hated title Special Service and its association with the German SS.[2] In January 1945, the Brigade was involved in the battles to secure the Myebon peninsula and Kangaw.[1]

The brigade was then withdrawn to India to prepare for the amphibious assault on Malaya, but the dropping of the atom bombs on Japan ended the war before the planned invasion.[1] Instead, the brigade moved to Hong Kong to secure the Crown Colony.[1]

In 1946, the Army Commandos in the brigade were disbanded and the brigade became a Royal Marine Commando formation.[1]

Formation in the Second World War

The brigade was composed as follows:[3][4]

3 Commando Brigade’s most high profile operation after the war was the Suez Crisis, when it took part in the amphibious assault against Egyptian targets. During Operation Musketeer, units of the brigade made a helicopter-borne assault.[5]

1971 saw the withdrawal of British forces from the Far East and Persian Gulf. The brigade returned to the UK with other British units. It moved to Stonehouse Barracks in Plymouth, where it remains to this day.[6] The brigade was deployed to Northern Ireland as part of Operation Banner as violence escalated during the Troubles in July 1972.[7]

The brigade's next large operation was in 1982. Argentina invaded the Falkland Islands, and 3 Commando Brigade, reinforced by 2 Para and 3 Para, was one of the two main British land formations that took part in operations to recapture the islands. The Brigade landed at San Carlos Water and marched across East Falkland to Stanley. Argentine units were defeated in several sharp engagements, and their forces surrendered on 14 June.[8]

In the aftermath of the Gulf War, the brigade was deployed on a non-combat task in northern Iraq. The Kurds had suffered immensely during the war and its immediate aftermath, and the brigade was used due to its rapid deployment ability. It provided humanitarian aid to the Kurds and saved many from starvation.[9] 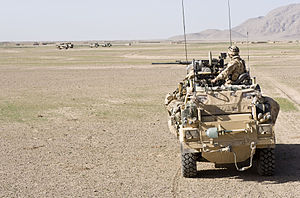 Recently, the brigade has been involved in two major campaigns, including Operation Veritas in Afghanistan, 2001 and 2002, and Operation Telic during the 2003 invasion of Iraq. In Afghanistan, no contact was made with enemy forces, despite contrary predictions. Iraq, however, saw heavy fighting occur in the early stages of the campaign, as the brigade made its first amphibious assault in over 20 years by landing on the Al-Faw peninsula in south east Iraq.[10] In 2006, the brigade returned to Afghanistan on Operation Herrick, replacing 16 Air Assault Brigade, where intense fighting occurred.[11]

The brigade is commanded by a Royal Marines brigadier and contains Royal Marines, Royal Navy, Army and Royal Air Force personnel. The subordinate units are:[12]

The following Battle honours were awarded to the British Commandos during the Second World War.[14][15]