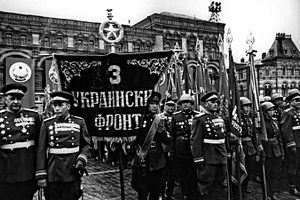 3rd Ukrainian Front was a Front of the Red Army during World War II. 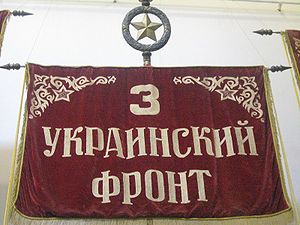 In the first half of October 1943, Southwestern Front (3rd Ukrainian Front from 20 October) commanded by Army General Rodion Malinovsky was tasked with attacking the German Panther-Wotan line, and later securing the bridgeheads on the eastern bank of the Dnieper on the Izyum - Dnipropetrovsk axis during the Battle of the Lower Dnieper. But the first attempt to establish bridgeheads failed. Three infantry armies: 8th Guards, 3rd Guards and the 12th Army, and two corps, 1st Guards Mechanized and 23rd Tank with 17th Air Army providing air support were assembled for the new assault.

On 10 October 1943 Chuikov's 8th Guards launched the attack, with the tank corps being inserted on the 13 October; the 12th Army attacked from the north, and 3rd Guards from the south of Zaporizhia. Germans retreated from Zaporizhia, destroying the railway bridge over Dnieper behind themselves.[1]

On 23 October Malinovsky, who wanted to take Dnipropetrovsk, and trap the First Panzer Army in the eastern reaches of the Dnieper bend, inserted the newly arrived 46th Army into combat. Together with 8th Guards it was trying to trap German forces against the western bank of Dnieper between Dnipropetrovsk and Dniprodzerzhynsk, the site of the huge Dnieper Hydroelectric Station. The 46th Army units tried to get to the station in time to prevent the destruction of the dam by retreating German troops. On 25 October Dnipropetrovsk was taken, but the installations and the Dam were partly destroyed.[2]

At the same time the Koniev's 2nd Ukrainian Front was attacking towards the Kryvyi Rih from the north with the 7th Guards Army, but the 1st Panzer Army was saved for the moment as Koniev's assault on Kryvyi Rih stalled at Ingulets river north of Kherson.[3] However, Vatutin commanding the 1st Ukrainian Front located north of Poltava sent the 5th Guards Tank Army which penetrated north of Kryvyi Rih, and was only halted by the stubborn German defence and length of its own logistic tail. On conclusion, both operations allowed the two Fronts to create a single Krementchug-Dnipropetrovsk bridgehead expanded to Zaporizhia due to the breaching of the Wotan Line by the Southern Front.

Later, units of the 6th Army seized bridgeheads south of Zaporizhia, and by the end of December, along with 2nd Ukrainian Front held on the Dnieper major strategic stronghold.

After the liberation of right-bank Ukraine by troops of the 3rd Ukrainian Front, in collaboration with 4th Ukrainian Front by making Nikopol-Krivoy Rog Operation 1944, the took to the district Ingulets, where in March–April launched an offensive at the Nikolayev-Odessa area. After carrying out the Bereznegovato-Snigirevskaya operation, the front readied itself for an attack on Odessa. 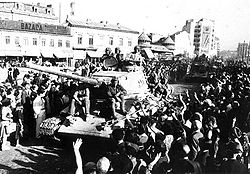 In August 1944 the 3rd Ukrainian Front engaged in the Iassy-Kishinev Offensive, which resulted in the release of all the Moldavian SSR, and Romania declaring war on Germany.

On 8 September Soviet troops entered the territory of Bulgaria and by the end of the month occupied the country. From 28 September - 20 October 1944 3rd Ukrainian Front in collaboration with the People's Liberation Army of Yugoslavia with the participation of troops of the Fatherland Front in Bulgaria carried out the Belgrade Offensive, which resulted in the liberation of the capital of Yugoslavia, Belgrade, and most of Serbia.

In October 1944 - February 1945, the 3rd Ukrainian Front had forces involved in the Siege of Budapest, including 46th Army. Its troops crossed the Danube and seized a bridgehead on its right bank. In January 1945, they repelled the enemy counter-attacks, trying to relieve the forces surrounded in Budapest, and in March, during the German Operation Frühlingserwachen, a counter-offensive broke the German troops in the area of Lake Balaton. The successful completion of this battle made possible the beginning of the Vienna Offensive on 16 March, in conjunction with the left wing 2nd Ukrainian Front. Thereafter the front's forces completed the liberation of Hungary, expelled the enemy from the eastern part of Austria and took its capital, Vienna.

On 15 June 1945, the on the basis of a Stavka directive on May 29, 1945 the front was disbanded, and reorganised as the Southern Group of Forces. 26th Army was grouped with 37th Army into the SGF.

The Front included 57th Army from October to December 1944.

Member of the Military Council: