The 40th Infantry Division ("Sunshine Division"[2]) is a modular division of the United States Army. Following the army's modularization the division has become a four brigade combat team division with National Guardsmen from throughout the Pacific/Western United States and Oceania. Its division headquarters is located at Los Alamitos Joint Forces Training Base in Los Alamitos, California.

After seeing service in World War I as a depot division, it was reorganized as the National Guard division for California, Nevada, and Utah, before seeing service in the Pacific Theatre of World War II. Later, the division served in Korea and some of its units were designated for Vietnam. The division was later reorganized redesigned as a National Guard unit completely within California. Later reorganizations included units from other states. As currently configured, the 40th Infantry Division has oversight and responsibility for the training and readiness of units in California, Oregon, Hawaii, Arizona, Washington, Alaska, New Mexico, Indiana, Nebraska, Utah, Guam, and the Northern Mariana Islands.

The 40th Infantry Division was organized at Camp Kearny, near San Diego, California, on 16 September 1917, originally designated as the 19th Division.[3] It was composed of National Guard units from the states of Arizona, California, Colorado, Nevada, New Mexico, and Utah.

The division was activated on 18 July 1917, as a National Guard division from the California, Nevada, and Utah Army National Guards. It was sent overseas on 3 August 1918 and redesignated the 6th Depot Division; received, equipped, trained, and forwarded replacements. Major General F. S. Strong was assigned as commander on 25 August 1917, but was replaced less than a month later by Brigadier General G. H. Cameron on 18 September 1917.

When the division arrived in France in August 1918, the Germans had just completed a series of offensives that started on 21 March and ended on 15 July 1918. It was decided that the new divisions would be used as depot divisions, supplying fresh troops to the more experienced combat divisions.[3] By the end of the war, the 40th Division had provided over 27,000 replacements to the 26th, 28th, 32d, 77th, 80th, 81st, 82d, and 89th Divisions. Thus the division as a whole did not serve in combat, but many division personnel fought, notably Captain Nelson Holderman, who received the Medal of Honor for his actions on the Argonne.

The division was reconstituted on 18 June 1926 with its headquarters in Berkeley.[3] The division was organized much as it was in 1917 with a lot of the units coming from Nevada and Utah. However, the Arizona and Colorado infantry regiments were replaced by two new California regiments, the 184th Infantry and 185th Infantry. In 1937 the division headquarters was moved to Los Angeles.

It departed for overseas service on 23 August 1942. The division's first overseas assignment was the defense of the outer Hawaiian Islands, where it arrived in September 1942.[3] Training continued as defensive positions were improved and maintained. In July 1943, the division was concentrated on Oahu, and relieved the 24th Infantry Division of the defense of the North Sector. Relieved of the North Sector in October 1943, the 40th entered upon a period of intensive amphibious and jungle training. On 20 December 1943, the first units left for Guadalcanal,[3] and by mid-January 1944, movement was completed, and the division prepared for its first combat assignment. On 24 April 1944, it left Guadalcanal for New Britain. The regiments of the division took positions at Talasea on the northern side of the island, at Arawe on the southern side, and at near the western end. Neutralization of the enemy was effected by patrols. No major battle was fought. Heavy rain and mud were constant problems.[3] 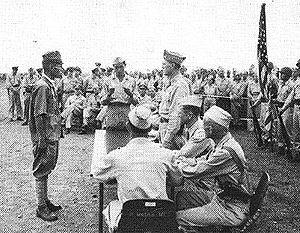 Japanese soldier surrenders in the Philippines

The 40th was relieved of missions on New Britain on 27 November 1944 by the Australian 5th Division, and began training for the Luzon landing. Sailing from Borgen Bay on 9 December 1944, the division made an assault landing at Lingayen, Luzon, under command of XIV Corps, on 9 January 1945. Seizing Lingayen airfield, the division occupied Bolinao Peninsula and San Miguel, and advanced toward Manila, running into heavy fighting in the Fort Stotsenburg area and the Bambam Hills.[3] Snake Hill and Storm King Mountain were taken in February and the 40th was relieved, 2 March. Leaving Luzon on 15 March 1945 to cut behind the Japanese, the division landed on Panay Island on the 18th and knocked out Japanese resistance within ten days, seizing airfields at Santa Barbara and Mandurriao. On 29 March, it landed at Pulupandan, Negros Occidental, advanced through Bacolod City toward Talisay, which it secured by 2 April 1945.[3] After mopping up on Negros Island, the division returned to Panay in June and July 1945. In September 1945, the division moved to Korea for occupation duty.[4][5][6]

The division returned to the U.S. on 7 April 1946 and was reportedly inactivated the same day. Its casualties during the war included 614 Killed in Action, 2,407 Wounded in Action, and 134 Died of Wounds.

On 1 September 1950, the 40th Infantry Division was again called into active federal service for the Korean War. Shipping out of Oakland & San Francisco, California in late March 1951, the division deployed to Japan for training. For the next nine months, they participated in amphibious, air transportability, and live fire training from Mount Fuji to Sendai. On 23 December, the division received alert orders to move to Korea. The division moved to Korea in January 1952. After additional training, the division moved north in February 1952, where it relieved the 24th Infantry Division on the battle line. At the time the division consisted of the 160th, 223rd, 224th Infantry Regiments,[3] and smaller non-regiment sized units.[7] 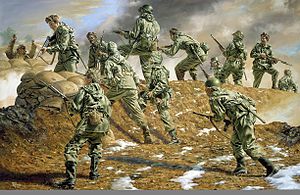 Painting of the 40th Infantry Division in the Kumwha Valley

In Korea, the 40th Infantry Division participated in the battles of Sandbag Castle and Heartbreak Ridge. In these campaigns, the division suffered 1,180 casualties, including 311 who were killed in action, and 47 who later died from wounds received in action.[1] Total division casualties in Korea included 376 killed in action, 1,457 wounded in action, and 47 died of wounds. After the division was sent back to Japan, its time in Korea was commemorated by the commissioning of a punchbowl created by a local silversmith, by some accounts made up of the melted down Combat Infantryman Badges of the divisions veterans, with the geography of Heartbreak Ridge etched inside the bowl.[8][9] It was used at ceremonial functions until it was stolen, and was subsequently bought at a garage sale by a married couple, who kept it for 18 years. It was then recovered and put on display at the division headquarters. It is now displayed at the California State Military Museum, and is registered in the National Archives.[10]

On 13 August 1965, Lieutenant Governor Glenn M. Anderson called out elements of the division to put down the Watts Riots, at the request of Los Angeles Police Chief William H. Parker. The absence of Governor Pat Brown vested gubernatorial authority in Anderson.

On 1 December 1967, a major reorganization of the National Guard reduced the Guard to eight combat divisions, the 40th Armored Division being one of the casualties. On 29 January 1968, the division was eliminated and the 40th Infantry Brigade and 40th Armored Brigade were organized.[1]

On 13 January 1974, the California Army National Guard was reorganized. The 40th and 49th Infantry and the 40th Armored Brigades were inactivated and the 40th Infantry Division was reformed.[1]

Like most reserve component units of the Army, the division sat out the Vietnam War, being left unmobilized, apart from its Aviation Company.[1] The 40th Aviation Company did one tour in South Vietnam.

In January, 1974 Major General Charles A. Ott, Jr. was appointed commander of the division, and he served until accepting appointment as Director of the Army National Guard at the National Guard Bureau later that year.[14]

In 1987 the division's aviation units were reorganized, and the 140th Aviation Regiment was established.

From 1986 until 1995, the division's CAPSTONE wartime organizational structure included the 140th Military Intelligence Battalion (CEWI) (HD). Allocated to the United States Army Reserve in peacetime, the mission of the battalion was to provide the division commander and G-2 with electronic warfare intelligence and analysis, as well limited counterintelligence/interrogation support and long range surveillance. The battalion's long-range surveillance detachment was stripped from the battalion in peacetime and allocated to the California Army National Guard.

The 40th Infantry Division was not deployed in the Persian Gulf War.

On 29 April 1992, Governor Pete Wilson ordered elements of the 40th Infantry Division to duty to put down the so-called "Rodney King" riots. The 40th ID responded quickly by calling up some 2,000 soldiers, but could not get them to the city until nearly twenty-four hours had passed, due to a lack of proper equipment, training, and available ammunition, which had to be picked up from Camp Roberts, California (near Paso Robles). Initially, they only secured areas previously cleared of rioters by police. Later, they actively ran patrols, maintained checkpoints, and provided firepower for law enforcement. By 1 May, the call-up had increased to 4,000 soldiers continuing to move into the city in Humvees, who were later federalized under Title 10 USC by President George H.W. Bush.[15]

On January 17, 1994, Governor Pete Wilson activated the 40th Infantry Division (M) to respond to the aftermath of the Northridge Earthquake, and emergency services were up and running within five hours of the quake.[18]

In November 1997, Battery F (TA), 144th Field Artillery Regiment, represented the state of California in Bosnia. During this deployment, Battery F conducted Firefinder counter-battery radar operations, convoys and base security all with little to no armor, with a high threat of mine strikes and ambushes. Most drivers exceeded 21,000 kilometres (13,000 miles) during the seven months in country.[19]

In November 2000, Battery F was again called to duty for its expertise in the Kosovo region.[19]

Until Battery F's arrival in Afghanistan, radar operations were virtually unknown and uncared for. Nevertheless, the unit quickly became a very important resource and a leading factor in base defense operations.[19]

The semi-sunburst was suggested as the unit's shoulder sleeve insignia, and represents the division's home of Southern California. The demi fleur-de-lis symbolizes service in France during World War I. The outer rim of the sun rays refers to the Philippine Presidential Unit Citation award. The red arrowhead alludes to firepower of the division and represents their assault landing at Luzon in World War II. The Torri gate, a symbol of the Far East, refers to the award of the Republic of Korea Presidential Unit Citation.

The unofficial nickname came from the Korean War era when the unit was training in Japan. It was a combined result of disparaging remarks made by Army regulars about the National Guard division and the appearance of the unit shoulder sleeve insignia. The California Guardsmen took to their new nickname with a soldier's sense of humor, and turned it into a rallying symbol.[29]