The 43rd Infantry Division was a formation of the United States Army from 1925 to 1967, serving in the Pacific during World War II. It was activated on 21 March 1925 as a National Guard Division in Connecticut, Maine, Rhode Island, and Vermont. The 143rd Area Support Group of the Connecticut National Guard now carries on the heritage. 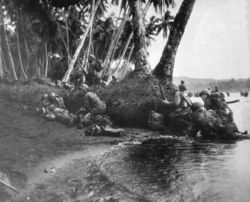 The 43d Infantry Division landed in New Zealand on 23 October 1942. The 172nd Infantry Regiment arrived at Espiritu Santo, 26 October. The Division moved to Noumea, New Caledonia, in November and to Guadalcanal, 17 February 1943. The Russell Islands were occupied without opposition, 21 February, and training continued. Elements landed on Vangunu and Rendova Islands against minor resistance, 30 June. Rendova served as the major staging point for the assault on the Island of New Georgia. The assault on New Georgia was met with determined enemy resistance. The Japanese fought fiercely before relinquishing Munda and its airfield, 5 August. Vela Cela and Baanga were taken easily, but the Japanese resisted stubbornly on Arundel Island before withdrawing, 22 September. After training at Munda, the 43d moved to Guadalcanal and thence to New Zealand for rest and rehabilitation. On 19 July 1944, the Division assumed defensive positions at Aitape, engaged in patrols and reconnaissance at Tadji and along the Drinumor River, 25 July, and took the offensive, 8 August 1944, ending organized resistance on the 25th. On 9 January 1945, the 43rd made an assault landing in the San Fabian area, Lingayen Gulf, Luzon. Under enemy fire, the Division secured the beachhead and fought into the Lingayen Plain by 12 February. The offensive was resumed against the enemy north and west of Fort Stotsenburg, 27 February. After ending Japanese resistance in the Zambales Mountains with help from the Philippine Commonwealth Army and Philippine Constabulary, the 43d swung south against the Shimbu Line. On 6 May 1945, the attack continued in the Bulucan area. Ipo Dam was secured and enemy opposition smashed in the Ipo area, 19 May. Mopping-up activities continued until 30 June 1945. The Division left Manila, 7 13 September, for occupation duty in Japan until it left for home.