The 44th Infantry Division was a division of the United States Army National Guard from October 1920 to November 1945, when it was inactivated after Federal Service during World War II. A second 44th Infantry Division existed in the Illinois Army National Guard from 1946 until October 1954, when that division was disbanded after federal service during the Korean War.

Originally named the 44th Division, it was constituted on 19 October 1920 as a National Guard Division, as a result of the National Defense Act of 1920's major expansion of the National Guard.[1][2]:374 As originally conceived, the division was to consist of National Guard units from the States of Delaware, New Jersey and New York. However, units from the State of Delaware were never assigned to the division. The 57th Infantry Brigade from the New Jersey Army National Guard (NJARNG) and the 87th Infantry Brigade of the New York Army National Guard (NYARNG) were incorporated almost immediately and growth continued piecemeal, as subordinate units were organized, until 1940.[3] The shoulder sleeve insignia (unit patch) of the 44th Division was approved by the Secretary of War on 5 October 1921.[4] The division was formally organized and federally recognized on 26 March 1924.[2]:374

The division was en route to New Jersey on 7 December 1941, returning to Fort Dix when news was heard of the Japanese attack on Pearl Harbor. A regimental combat team, based on the 113th Infantry, was immediately detached from the division and attached to the Eastern Defense Command to provide ground forces for the defense of the East Coast from New York to Philadelphia. Shortly afterwords, the remainder of the division moved to Camp Claiborne, LA, where the 44th Division was reorganized and redesignated, the 44th Infantry Division on 16 February 1942.[2]:374[6]:131

The division was then sent to Fort Lewis Washington, where it participated in defense of the West Coast for the remainder of 1942. In February 1943, the 44th Infantry Division, much reduced through the loss of personnel and units entered a period of rebuilding and training. After completing the "D-Series", division-level training, the 44th was sent to participate in the multi-division Fourth Army #6 Louisiana Maneuvers, 7 February-3 April 1944.[5]:106–107 [6]:131 The division then moved to Camp Phillips, KS for its final pre-deployment preparations.[6]:131[7] The division moved by railroad to Camp Miles Standish, Massachusetts, arriving on 24–27 August 1944;[8] departing the United States via the Boston Port of Embarkation on 5 September 1944.[6]

The 44th Infantry Division landed in France via Cherbourg, 15 September 1944, and trained for a month before entering combat, 18 October 1944, when it relieved the 79th Division in the vicinity of Foret de Parroy, east of Lunéville, France, to take part in the Seventh Army drive to secure several passes in the Vosges Mountains. Within 6 days, the division was hit by a heavy German counterattack, 25–26 October. The attack was repulsed and the 44th continued its active defense. On 13 November 1944, it jumped off in an attack northeast, forcing a passage through the Vosges Mountains east of Leintrey to Dossenheim, took Avricourt, 17 November, and pushed on to liberate Strasbourg, along with the 2d French Armored Division. After regrouping, the division returned to the attack, taking Ratzwiller and entering the Ensemble de Bitche in the Maginot Line. Fort Simserhof fell 19 December. Displacing to defensive positions east of Sarreguemines, 21–23 December, the 44th threw back three attempted crossings by the enemy of the Blies River. 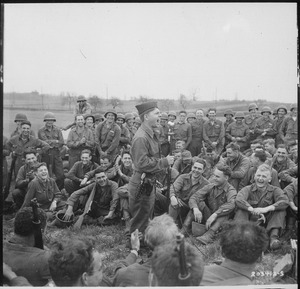 Mickey Rooney entertains soldiers of the 44th Division in Kist, Germany during a May 1945 jeep tour.

An aggressive defense of the Sarreguemines area was continued throughout February 1945 and most of March. Moving across the Rhine at Worms, 26 March, in the wake of the 3d Division, the 44th relieved the 3d, 26–27 March, and crossed the Neckar River to attack and capture Mannheim, 28–29 March. Shifting to the west bank of the Main, the division crossed that river at Gross-Auheim in early April, and engaged in a 3-week training period. Attacking 18 April, after the 10th Armored Division, the 44th took Ehingen, 23 April, crossed the Danube, and attacking southeast, took Füssen, Berg, and Wertach, in a drive on Imst, Austria. On 2 May, a group of V-2 rocket scientists that included Wernher von Braun surrendered to the 44th.[9] Pursuing the disintegrating enemy through Fern Pass[10] and into the Inn River valley, the 44th set up its CP at Imst on 4 May. After a short period of occupation duty, the division returned to the United States in July 1945 for retraining prior to redeployment, but the end of the Pacific war resulted in inactivation in November 1945 at Camp Chaffee, AR.[2]:374[6]:131[11]

The 44th Infantry Division was reactivated in the Illinois Army National Guard in 1946,[13] and inducted into federal service in early 1952 during the Korean War. It was disbanded after its release from federal service on 10 October 1954.[14]