The 44th Kievskaya of the Red Banner Rifle Division of Nikolay Shchors, or 44th Kievskaya for short, was an elite military formation of the Soviet Union.

Although it was an elite formation, the division was destroyed during the Winter War, after being ordered to help the 163rd Infantry Division break a Finnish siege on the Raate road. On 30 November 1939, it was part of the Special Rifle Corps, 9th Army, together with the 54th Rifle Division.[2]

By the end of September the Division grew to 6700 bayonets, 450 sabers, 14 [artillery] guns, and from 10 to 18 machine guns "Maxim", 5 to 6 Colt, 20 to 30 Lewis. Because of that, selected regiments were reorganized into brigades. However, the name for the units were nominal as the brigade's headquarters were never formed, and functions of kombrigs were performed by the regimental commanders (colonel).

During the preparations for an assault on Kharkiv most of the division, however, refused to obey orders except for the Red Cossacks and the 4th Insurgent Nezhyn Regiment. For that the divisional commander N.Krapivyansky was dismissed and court martialed. I Lokatosh was appointed the new chief of division and I. Panafidin the political commissar. The name of the division also changed to the Special Insurgent Division (order of Military Council of Kursk direction group of forces of November 21, 1918) as well as its formation consisting now only out of two brigades:

Winter War (Destruction at the Battle of Raate Road) 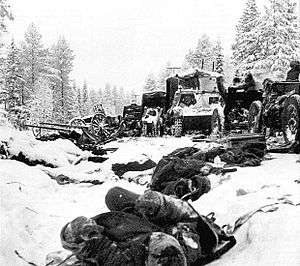 Soviet dead along the Raate Road, 1939

The 44th Rifle Division participated during the Soviet invasion of Poland in autumn 1939. Later, during the Finno-Russian Winter War, the division was sent to the Finnish front as reinforcement for the Soviet 163rd Rifle Division which had attempted to advance into central Finland and become surrounded after capturing the town of Suomussalmi and was suffering heavy casualties.[4] The 163rd Division, which was running short of food, was almost completely annihilated in combat with the Finnish 9th Infantry Division before the 44th Rifle Division could reach its position. With no ski troops, the 44th Rifle Division was completely road bound in the deep snow. The Finns, mounted on skis, and carrying superior arms (submachineguns), were able to break the route of march of the 44th Division on the road leading to Suomussalmi. By breaking the division into pieces along the road, after Finnish radio intelligence had confirmed that the whole division had entered the Raate road,[5] the Finns were able to annihilate the entire unit. According to Robert Edwards, the division's Commander A. Vinogradev managed to escape, but later, on the orders of Stalin's emissary, Lev Mekhlis, he was shot for incompetence following a sham trial. Of the 44th Division's 17,000 troops, 1000 were captured and 700 escaped. The rest died.[4]

Other records suggest that Commander (kombrig) Alexei Vinogradov was sentenced in January 1940 to the Highest Degree of Punishment (VMN) by the Military Tribunal of the 9th Army.[6] along with his chief of staff Onufri Volkov.[7] On January 11 he was publicly executed in front of formation.

The division was recreated after its destruction and part of 13th Rifle Corps, 12th Army, Kiev Special Military District in June 1941.[8]

'Captured Soviet Generals' says that the division commander, Major General S.A. Tkachenko, was captured by the Germans. The division was immediately caught up in conflict and suffered heavy losses. By 21 July 1941 the division was already short of shtat (establishment or Table of Organization and Equipment) by over 4,000 soldiers, 199 cargo trucks, and over 3,000 rifles and carbines. Divisional morale fell despite some small victories. Ultimately the division was wiped out in combat near the village of Podvyskoe in the Kirovograd and Uman region.[9]

The division was recreated at Leningrad in October 1941. It fought in northern Russia and Kurland with the 54th Army of Volkhov Front in January 1944 and the 67th Army of the Leningrad Front in May 1945. It was briefly reactivated after the war from 1955 at Buzuluk in Orenburg Oblast, from the 270th Rifle Division.[10] It was part of the 22nd Rifle Corps in the South Urals Military District. It was redesignated the 44th Motor Rifle Division in 1957 and then the 270th Motor Rifle Division in 1965.

File:44th rifle tanks.jpg
T-26 tanks of the 44th Rifle Division in Finland prior to an attack