Tasked as a Commando amphibious unit, 45 Cdo RM is capable of a wide range of operational tasks. Based at RM Condor,[1] their barracks in Arbroath, personnel regularly deploy outside the United Kingdom on operations or training. While 3 Cdo Bde RM are the principal cold weather warfare formation, personnel are capable of operating in a variety of theatres including tropical jungle, desert or mountainous terrain. The Commando is a regular participant in the annual Brigade cold weather warfare exercise in Norway, having been the first UK unit to specialise in the mountain and Arctic warfare role during the early 1970s and deployed to Norway on NATO’s northern flank most years until the end of the Cold War. 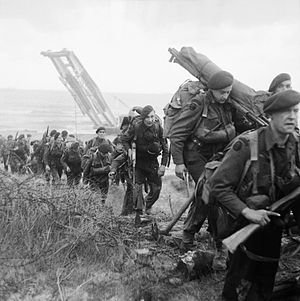 The 5th RM Battalion was originally raised for a brief period at the end of World War I (September 1918-February 1919), and was again raised on 2 April 1940 following mass mobilisation and the influx of “hostilities only” (HO) marines. The battalion was raised at Cowshot Camp in Brookwood (now part of the Pirbright Camp complex), being incorporated into 101 RM Bde, along with the 1st RM Battalion. Between August and October 1940 the battalion took part in operations in Dakar. On return until August 1943 the battalion conducted extensive training in Wales, Scotland, the Isle of Wight and Burley, where the battalion reformed as 45 RM Commando on 1 August 1943.

After reforming and retitling, the unit transitioned to the Commando role as a formed unit, by-passing the individual volunteer and selection process undertaken by Army Commando candidates. Personnel undertook, and completed, the Commando Basic Training Course at Achnacarry, Scotland.

As part of the 1st Special Service Brigade the Commando participated in Operation Overlord, the D-Day Normandy landings, going on to move through Europe into Germany, including Montforterbeek on 23 January 1945. The Commando returned to UK after a short period in Germany in June 1945.

The Commando was based in Hong Kong between January 1946 and May 1947, conducting internal security duties, as part of 3 Cdo Bde RM. Between May 1947 and December 1948 the Commando moved to Malta, during which time it deployed to Libya, Palestine, Suez and Jordan. The Commando returned to Hong Kong in December 1948 and from there deployed to Malaya between 1950 and 1952 taking part in operations during the Emergency. Between 1952 and 1959 the Commando was once again based in Malta, from where it took part in a number of tours of Cyprus as well as the Suez Crisis, conducting the first ever helicopter assault.

Between 1960 and 1967 the Commando was based in Aden, from where it conducted 10 operational tours in the Radfan during the Aden Emergency. The Commando also deployed briefly to Kuwait following an Iraqi threat to her Independence in 1961 and also to Tanganyika during the Zanzibar Revolution for internal security duties in 1964, returning to Aden after each deployment. The last elements of the Commando left Aden on 29 November 1967 to return to the UK for the first time since the end of World War II. They set up home in Stonehouse Barracks, Plymouth.

In 1970 the Commando began Arctic training for the first time, taking on the role of Britain’s mountain and Arctic warfare experts (joined later by the other Commandos). 45 Cdo RM deployed to Norway for the first of many winters in 1971, which coincided with a move of the unit from Stonehouse, Plymouth to the old Naval Air Station, RNAS Arbroath (now RM Condor) in Arbroath, Scotland, where the unit still remains.[2] This period in the unit’s history is characterised by the alternation of Northern Ireland tours and winters in Norway, protecting NATO’s northern flank. The principal break in this routine came from the Falklands War in 1982.

Following the Argentine invasion of 2 April 1982, 45 Cdo RM, under the command of Lieutenant Colonel Andrew F. Whitehead RM, had their Easter leave cancelled and hastily deployed to the Falklands, travelling in a mix of Royal Navy (RN) and Royal Fleet Auxiliary (RFA) ships. Having made a tactical landing at Red Beach, Ajax Bay on 21 May 1982, the men of 45 Cdo RM yomped across East Falkland, via Port San Carlos, New House, Douglas Settlement, Teal Inlet and Mount Kent to take part in the Battle for Port Stanley. They conducted a night attack on the Two Sisters feature over the 11/12 June 1982, during which the Commando lost 8 men killed and 17 wounded. The Argentinians surrendered on 14 June 1982. Lt. Col Whitehead was awarded the Distinguished Service Order (DSO). The Unit Order of Battle (ORBAT) at the time of the Falklands War was three fighting companies, named X, Y and Z or X-Ray, Yankee and Zulu. Each company, led by a Company Commander, consisted of approx 100 ranks, divided into three 'troops' each led by a Troop Commander. In addition Support Company (Spt Coy) consisting of Anti-Tank, Mortars, Assault Engineers and Recce Troop. Headquarters Company (HQ Coy) consisting of the Signals Troop, Drivers and Admin/Base Staff were additional support. The Senior Non-Commissioned Officer (SNCO) of the unit was the Regimental Sergeant Major (RSM), Warrant Officer Class 1 (WO1) Pat Chapman RM.

The Commando deployed to Northern Iraq on Operation Haven at the end of the Gulf War, where it spent 2 months in the Zakho area, withdrawing at the end of June. In 1993 The Commando was deployed to Belize for the last operational jungle tour in that country. In a mirror image of its 1961 deployment to Kuwait, the Commando returned on Operation Driver [1] in 1994, in support of Kuwait, following some threatening troop movements by the Iraqis on their side of the border. In 1998 the Commando was redirected from an exercise in Belize, to assist Nicaragua and Honduras following the devastation caused by Hurricane Mitch – Operation Tellar [2]. 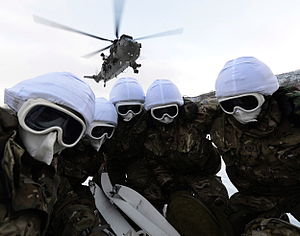 Ground crew with the Commando Helicopter Force huddle from the downwash of a Sea King helicopter on exercise in Norway.
File:45 Cdo Royal Marines in Afghanistan MOD 45149706.jpg
Members of Whiskey Company, 45 Commando Royal Marines patrolling across barren landscape from FOB (Forward Operating Base) Jackson at Sangin in Helmand Province in Afghanistan.

At the turn of the Millennium, the Commando was deployed to Kosovo under KFOR as part of 3 Cdo Bde RM on Operation Agricola IV.[3][4] From April 2002, the unit deployed to Afghanistan on Operation Jacana, and also took part in Operation Telic 1, the 2003 invasion of Iraq. X-Ray Company Group was attached to the Special Boat Service(SBS), WhiskeyCompany Group attached to the Special Air Service(SAS).

In September 2003, 45 Commando was granted the Freedom of Angus in recognition of their service in Iraq and Afghanistan and contribution to the local economy of Arbroath, where they are based at.[5]

In January 2004 the unit deployed to Northern Ireland (Operation Banner) for 6 months in support of peacekeeping operations, returning home in June. On return, it became the Spearhead Lead Commando, a role assumed on a rotational basis. The Lead Commando is at a high level of readiness, able to deploy at short notice on operations worldwide.

In September 2004, whilst still Lead Commando, the Group deployed to the United States on Exercise BLACKHORSE. This was split into two phases, the first of which took place with the United States Marines Corps Ground-Air Combat Centre at 29 Palms, California. This 900 square miles of desert, allowed realistic live firing, involving artillery and air strikes. The second phase took place at the Marine Corps Mountain Warfare Training Centre, high in the Sierra Nevada Mountains. An early snowfall meant the Commando was able to carry out cold weather warfare training, operating between 7000 and 11,000 feet (3,400 m). 2006 saw the Unit deploy to Norway for further Arctic training which culminated with a NATO led exercise.

The focus switched to preparation for deploying to Afghanistan on Operation HERRICK 5 in late 2006. This deployment saw the Commando take on a number of different roles, the principal one being that of the Operational Mentoring and Liaison Team (OMLT). The OMLT task was to work alongside the Afghan National Army and develop it into a self-sufficient organisation. The Unit returned from Afghanistan in April 2007, before reforming and assuming Lead Commando Group responsibility later that year.

October 2008 saw the Commando return to Afghanistan as Northern Battle Group in Helmand Province on Operation HERRICK 9. The operational area of responsibility was the Upper Sangin Valley which extended for 80 km along the length of the Helmand River. The Battle Group was in excess of 1200 strong, half of whom came from 45 Commando.

The Unit was split between five Forward Operating Bases. The main location was in the town of Sangin and consisted of the Commando HQ and Whisky Company. The town had a population of approximately 25,000. Whisky Company was responsible for the security of Sangin, mounting daily patrols to reassure the local population. Some parts of the town were friendlier than others, and the Company was involved in a number of battles with the Taliban in the suburbs.

The deployment was a hectic 6 months, but the successes were notable. Most progress was in Sangin, with schools being built and shops opening in the bazaar. Importantly, the Afghan Police are now almost exclusively responsible for security in the centre of the town. The influence of the district governor helped spread local governance with ten times more people than predicted, from all tribal backgrounds, registering for the national elections. The Afghan government also delivered hundreds of tons of free wheat seed to local farmers, encouraging them to grow wheat instead of poppy.

This progress was possible because of the security that was provided by 45 Commando. The Unit made it harder for the enemy to intimidate local Afghans, and when attacked, the Unit responded quickly, and effectively. 45 Commando conducted a number of intelligence led, targeted operations against the Taliban. Operation GHARTSE PALANG found hidden stores of assault rifles, explosives and ammunition. Another, Operation DIESEL, was a night time raid by helicopter into one of the enemy’s safe havens, which included the destruction of their main heroin production factories. 45 Commando left the Upper Sangin Valley significantly safer and better developed than it had found it.

April/May 2009 saw the return of the Commando to Arbroath in Scotland for reorganisation ahead of a winter deployment to Norway to practice cold weather and amphibious tactics.[5]

45 Commando deployed to Afghanistan again, as part of 3 Commando Brigade, for 6 months in March 2011 on Operation Herrick 14. They returned home in October 2011.

It was stated that 45 Commando is the lead commando group for the UK until May 2013, able to deploy at short notice.[6] In October 2013 Whiskey Company from 45 Commando exercised in Ghana with US, Dutch and Spanish Marines.[7][8]

The following Battle honours were awarded to the British Commandos during the Second World War.[9]