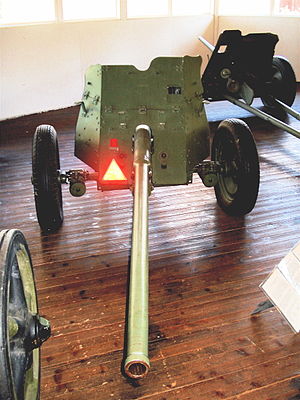 The M-42 was developed by the No. 172 Plant in Motovilikha as an upgrade of the 45 mm anti-tank gun M1937 (53-K). The gun received a longer barrel (L66, 20 calibers more than the previous one, so it was a 45 mm/L66), shells with more powerful cartridges, and a thicker shield (7 mm instead of 4.5 mm), but of hinged construction as a need for reduced profile, requiring the weapon to be serviced by crews while kneeling. Some minor changes were also introduced in order to speed up production.

These guns were used from 1942 until the end of World War II. In 1943, due to its insufficient anti-armor capabilities against new German tanks such as Tiger, Panther and Panzer IV Ausf H, the M-42 was partially replaced in mass production by more powerful 57 mm ZiS-2 anti-tank gun. The M-42 remained in production, however as it was quite effective against lighter vehicles and could pierce the side armour of Panther and Panzer IV Ausf H. Fragmentation shell and canister shot gave the gun some anti-personnel capability.