The 47th Army was formed in late July 1941 in the Transcaucasian Military District as part of the Soviet Union's border defenses with Iran. On 1 August 1941 the army's composition was reported as including the 236th Rifle Division, 63rd and 76th Mountain Rifle Divisions, the 116th Howitzer Artillery Regiment (an RVGK asset), the 456th Corps Artillery Regiment, the 6th and 54th Tank Divisions, and engineering forces which included the 61st motorized engineer battalion, 75th independent engineer battalion, and the 6th and 54th pontoon bridge battalions.[1] 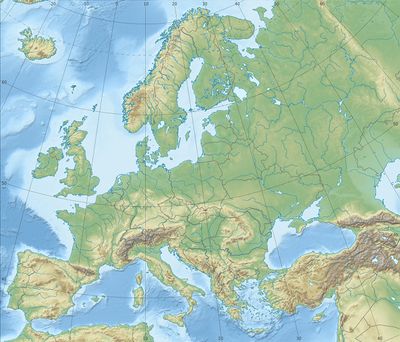 Soviet units began their part of the Anglo-Soviet invasion of Iran on 25 August 1941. The 47th Army broke through the border and moved from the Azerbaijan SSR into Iranian Azerbaijan.[2] They moved towards Tabriz and Lake Urmia. They captured the Iranian city of Jolfa. An Iranian reconnaissance aircraft discovered the forces south of Jolfa moving towards Marand. It was possible for the Iranian 3rd Division under General Matboodi to move motorized infantry towards Shibli in order to halt the breakthrough, but due to being taken by surprise, he failed to make the proper counterattack. He also failed to destroy the bridges and highways with explosives, allowing the Soviets to rapidly move through the region.[3] Five Iranian bombers were intercepted trying to attack the Soviet positions around Jolfa.[4]

By January 1942, the army was assigned to the Crimean Front, and fought in the Kerch Peninsula in Crimea, the Taman Peninsula and Caucasus region of southern Russia, in the Belgorod-Kharkov Offensive, and to the east of the Dnieper River in Ukraine until early 1944.[5]

On 1 June 1942, the army's infantry comprised 32nd and 33rd Guards Rifle Division, 77th Mountain Rifle Division, and 103rd Rifle Brigade. Artillery assigned included 547 пап, 18 гв. мп, and additionally 40th Tank Brigade was part of the army.[6] In March 1944, the 47th Army was subordinated to the 2nd Belorussian Front, and then moved to the 1st Belorussian Front in mid-April 1944 and fought as part of this force until the end of World War II in Europe. As part of the 1st BRF, the 47th Army fought in the Vistula-Oder Offensive, East Pomeranian Offensive, and the Berlin Offensive.[7]

Key actions that the 47th Army took part in were the liberation of Kovel on July 6, 1944, forcing the Germans out of the Praga suburb of Warsaw on September 14, 1944, and achieving a junction with troops of the 1st Ukrainian Front on April 25, 1945 that completed the encirclement of Berlin.[8]

The 47th Army was inactivated on February 5, 1946 in Halle, Germany, after taking part in the occupation of eastern Germany.