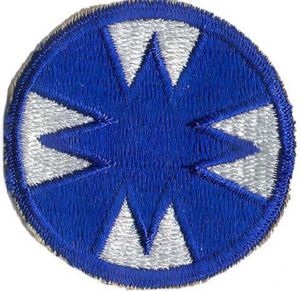 The 48th Infantry Division was "created" in 1944 as an 'phantom division'. It formed part of Operation Quicksilver and Fortitude South II to replace the real 6th Armored Division when it moved to Normandy.[1][2]

The division was presented to the Germans as a well trained unit that had been formed at Camp Clatsop, Oregon in 1942. Following training at the Desert Training Center and maneuvers in the Olympic Peninsula the division had guarded the ALCAN Highway before being shipped to England in June 1944, where Agent Garbo reported that the uncle of one of his agents (An American NCO in the ETO Services of Supply.[3]) was a member of the division, which was not at the time he made the report under the command of either the First US Army Group or the 21st Army Group.[2][4] After disembarkation, the division established its initial headquarters at Newcastle-under-Lyme in Staffordshire before moving to Woodbridge in Suffolk.[2] There, as part of the U.S. XXXIII Corps (United States) of the US 14th Army it was assigned the role of following up the Pas de Calais landings.[5]

Following Fortitude South II the division was depicted as moving to Brockenhurst in Hampshire where it carried out air landing training in conjunction with the US 21st Airborne Division. In December 1944 the division was depicted as moving to Dundee in Scotland where it was disbanded at the start of 1945, with some soldiers being used as replacements for other units while a small cadre returned to the United States.[2]

In addition to the usual divisional support units the 48th Infantry Division was presented as including the:[2] 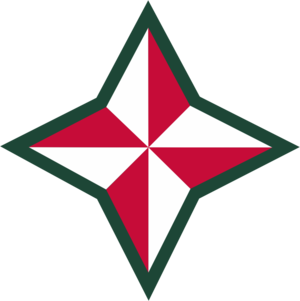 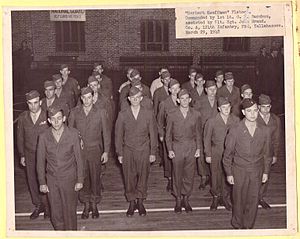 The 48th "Hurricane" Infantry Division was formed on 15 September 1946 of Florida and Georgia National Guardsmen. The division conducted its first annual training from 18 July to 1 August 1948 at Fort Jackson.[7]

On 15 September 1946, the division was reorganized as an armored division[8]

"To prepare for challenges in Western Europe, the new troop basis authorized the conversion of four National Guard infantry divisions to armored divisions."[9] Georgia, and Florida agreed to convert and on 1 November 1955 the 48th Division was redesignated as an armored division. When the 51st Infantry Division was inactivated in 1963, some of its units, both from Florida and South Carolina, were assigned to the 48th Armored Division. On 1 October 1957 the 48th Armored Division headquarters was transferred from Macon, Georgia to Jacksonville, Florida as Major General Maxwell Snyder took command.

When the Army National Guard experienced its next major reorganization in 1967, the 48th Armored Division was chosen for inactivation, which occurred on 1 January 1968.